A long and pretty damp hike around the far north of the Lakes mountains.

Knott.gpx Open full screen  NB: Walkhighlands is not responsible for the accuracy of gpx files in users posts
All the drama and ‘mountaineering’ of this route is in the first mile, climbing the impressive rocky eastern face of Carrock Fell via a steeply slanting grass traverse and then an even steeper gully. Exhilarating, if lungbusting, stuff, but the path is clear enough and stays the coward’s side of being really exposed. Still a fair climb through the heather to the summit once the gradient eases, but nothing so breathless. Looking down the ascent route to Stone Ends South from the grass traverse East towards the North Pennines from Carrock Fell ascent After dropping off Carrock Fell, the rock and heather disappear and the next few miles are over swampy grasslands. The way is always clear, but you spend plenty of time zigzagging and leaping between the firmer bits in the vain attempt to avoid a bootfull... By High Pike, you’re already grateful for its signature seat and a lovely vista west to the sea. As for much of the day, long views south were lost in the hazy sun, but – given conditions in recent months – that isn’t a real complaint! It’s a long trudge over Knott, higher but otherwise lesser than the other peaks on this route, to Great Calva - the gentle slopes seeming to stubbornly refuse to drain at all – and it’s rather a surprise to find a decent path at the end steepening up to the summit; also to see, at this low level and after a warm week, deep drifts of snow still lying in the gullies beside the way. After a steep, cling-to-the-heather descent from Great Calva, it’s a long, flat five miles footbashing home, first through the bleak unchanging Caldew valley and then, welcomely, into verdant Mosedale. Mungrisdale Common rising above the foot of Great Calva Carrock Fell over the Caldew from the Cumbria Way bridleway 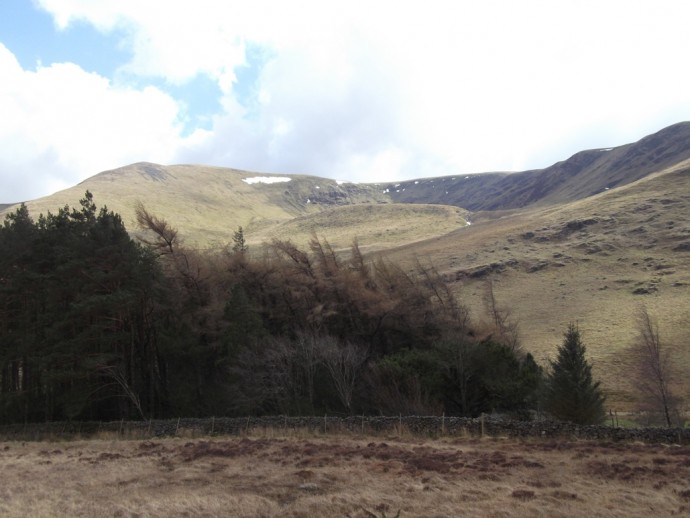 The bowl of Bowscale Tarn Knott at the head of Mosedale

It really is a long, long way back… probably better in hindsight to park in Mosedale for this route, break it up a little, and finish with the best views of the day.

Beautiful weather though, even had a slightly sunburnt face.

Great report and pics as ever Poppie. I did the Carrock fell and High pike in December when it was all wonderfully frozen solid. I can just imagine just how boggy it can be.

Good pics Poppie, at least you could see where you were going which was more than I could on my visit. Revisit needed