Our first time in this part of the world so it was only fitting that we had a drive down to the most south-west bit. We had spent the morning at Logan Botanical Garden - lots of interesting southern hemisphere trees and shrubs, though the late spring had delayed everything else - so it was early afternoon by the time we arrived at the car park just before the lighthouse. For the most part we followed the route as described, but with one deviation at the end.

20130409MullOfGalloway.gpx Open full screen  NB: Walkhighlands is not responsible for the accuracy of gpx files in users posts
We made for the the RSPB centre on the headland first but they said that there wasn't much to see. Like the flowers at Logan, the persistent cold weather had delayed the start of the nesting season. We went down the steps to the now redundant foghorn, but if Northern Ireland wasn't too far away it was too hazy to see. Then back up to the lighthouse and the start of the walk proper. Heading west on the initial part was easy walking on cropped turf with good cliff views. At West Tarbet bay what looked like a rusty feed silo was stranded on the beach. Just afterwards the path crosses a couple of shallow gullies - this one would make a nice camping spot. The footpath sign to leave the coast was easy to spot - a short stretch across a ploughed field and then up a farm track. This bit was a less interesting, but at least enlivened by good sightings of yellowhammers and wheatears and a hare.
The path following the Kirk Burn down to the beach on the other side of the peninsula is more pleasant and we ended up on the stony shore there. A winding fainter path round the end of the bay then took us back to the clifftop, now with the lighthouse ahead of us. Instead of retuning to the road at East Tarbet Bay we followed a marker post to head down to the bay and crossed its foot to the far end. Here there is a slipway, which was built for bringing in lighthouse supplies, a ruined cottage and an information panel. Just beyond that a clear path continues on the lower slopes of the headland. Further on it's not much more than a sheep trod but perfectly distinct. It runs out when the way ahead is barred by heather and it was a short ascent over grass to meet a fence, which was in turn followed a short distance east to meet the wall which defines the lighthouse ground. A short ascent following the wall led us directly to the carpark. It was only 6pm but ours was the last car there. 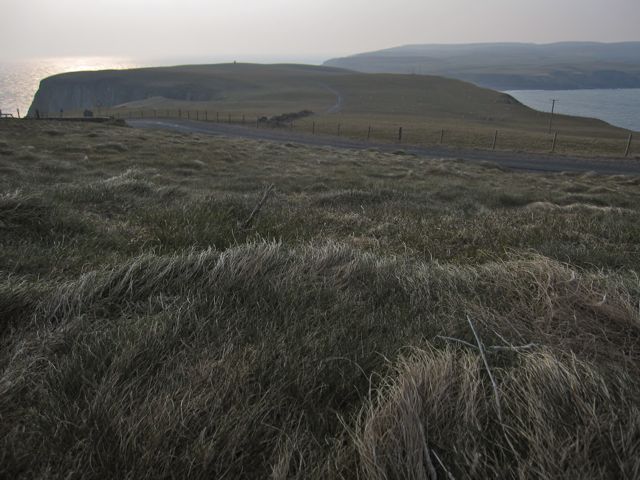 All in all, a fine little walk for a spring day.

Lovely part of the world. I stayed in the lighthouse keeper's cottage a few years ago when it first became a Nat Trust of Scot. property and the guy who looks after it let me go up to the top of the lighthouse - fascinating. Scenery there is stunning and the cliffs offer some death-defying scrambles. I had a moment or two on those

Thanks. Yes, staying in a lighthouse is fun with a pleasing sense of remoteness once the daytrippers have gone home. We stayed at Stoer Head lighthouse near Lochinver a couple of years ago, though that seems to have dropped out of the National Trust for Scotland portfolio these days.

What a beautiful spot, thanks for sharing your photos - I really need to go here now