Tryfan and the Glyders

Tryfan and the Glyders


I was keen to keep up my effort to build up my hill fitness, so it was nice to wake up to sunshine on Saturday morning. I was fairly certain that the tops would now be pretty much free of snow and I probably could have left my Scarpa SL boots in the garage until next winter, although there was one big flaw in this plan - I haven't got any summer boots

Anyway, the extra weight of the Scarpas would be helpful in building my strength and endurance before this year's summer trip to Scotland (now only 6 weeks away!).

Leaving the house I still hadn't decided where to head for, but en route decided on a loop from Ogwen taking in Tryfan and the Glyders which offers some fantastic scrambling. Neil and I had done such a loop earlier in the year, although the weather on that occasion was pretty poor and we avoided the route up bristly ridge to Glyder Fach. On that occasion we had descended via Devil's kitchen and whilst that was a pleasant enough route I fancied something a little longer so decided to add in Y Garn. This would have the added bonus of visiting what is probably my favourite spot in Snowdonia; just beneath the summit of Y Garn looking down the Ogwen valley

Arriving after 10am in bright sunshine I was not surprised to find the roadside parking places at the foot of Tryfan all taken, but I got a place in the car park a bit further towards Ogwen cottage.

One thing that I do quite like when the hills are busy is the fact that I can focus on someone ahead and reel them in, this helps keep my pace up when I'm after a work-out as well as a walk. That said this only works if those ahead are on the route I plan on taking, but on Tryfan there is no clear single route as there is so much scrambling on offer people choose routes according to how challenging they wish to make the ascent. I was looking for the most challenging routes, which is some instances require some rock climbing moves (in this way I was working out my arms on shoulders too). I paused briefly en route to take in the views back up Ogwen valley towards my destination for later in the day. 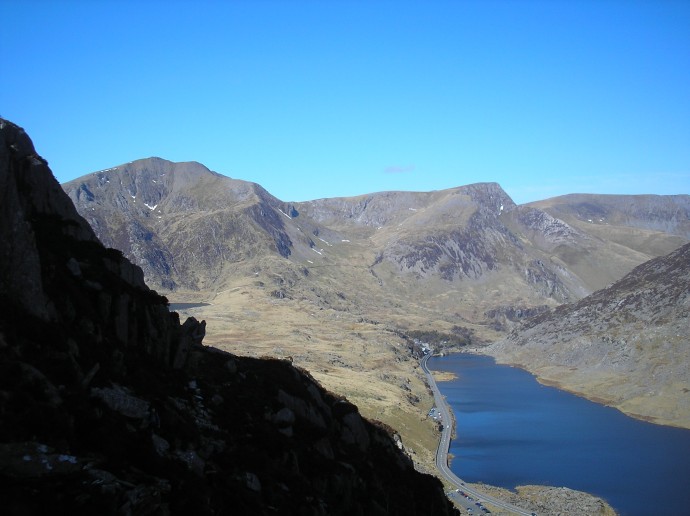 I reached the summit 67 minutes after leaving the car and in need of sit down after a good deal of exertion. The summit was busy with many people being photographed on either of the summit monoliths 'Adam and Eve'. Some people were trying out the customary leap (more of a big step) between the two.

After a quick bite to eat and a bit of a rest I took a few photos - I tried to take one of myself with Adam and Eve in the background and didn't get the angle right so I missed the stones, but captured someone stood on top of one of them. In the picture it looks like a little action figure standing on my head 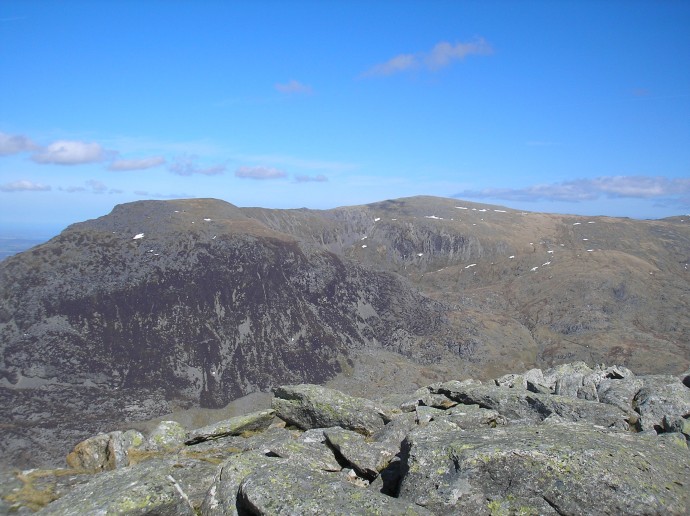 From Tryfan I descended south the bwlch Tryfan and then the approach to Bristly Ridge, before I started that climb I looked back at the south side of Tryfan. Tryfan from the south

There is a gulley to the right of Bristly Ridge that offers some top end scrambling, including two tricky little sections, although the exposure isn't great a fall would hurt - a lot!

I continued to work my way up looking for the most difficult routes arriving on the summit plateau of Glyder Fach two hours after leaving the car - with my hands feeling a little roughened up from the rock work.

Ordinarily I by-pass Glyder Fach summit as it is a mass of monster boulders and only a couple of metres higher than the plateau, but on this occasion I decided to make the effort to get some summit pictures. 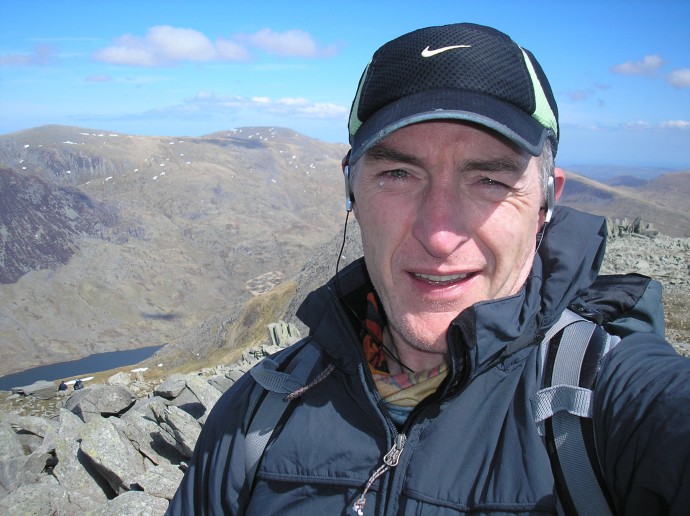 The route then heads towards Castell y Gwynt, although skirts off left before this and contours round the back before continuing towards Glyder Fawr. 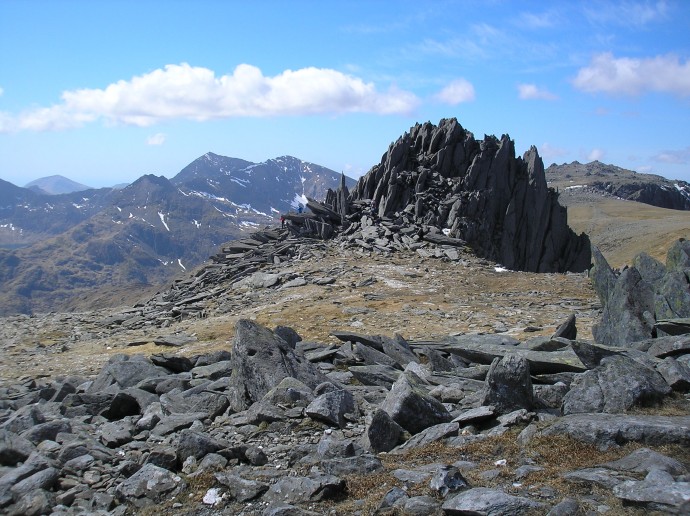 I'm pretty sure that only one of the Glyders would get munro status as there is very little drop between the peaks and consequently it's a pretty quick trip to the next summit. 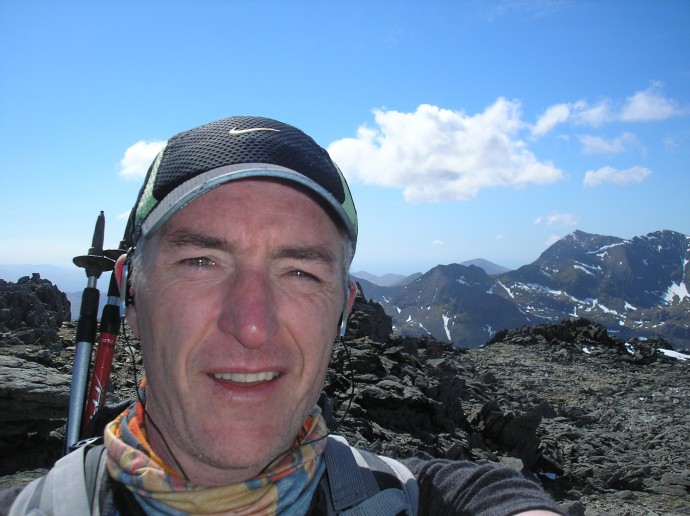 The route from Glyder Fawr towards Y Garn heads down a very steep scree slope. This is a route I've run many times in training during my fell running days, although now even with the support of my Scarpas I was worried about turning my ankle.

I passed Llyn y Cwn and started the gradual climb towards Y Garn. At this point the views down Ogwen valley start to open up on the right. The views down the valley as well as having an aesthetic value also draw the eye away from the climb to Y Garn. Although this is a pretty short climb to get there one must have already completed a decent ascent (either into the Glyders or up Devil's kitchen) and for me it will always be associated with the tipping point of a long and arduous fell race. I knew that once I had topped out on Y Garn then I had cracked the climbing - I also knew that from the stile it only took about 10 minutes to the summit, but they were a long 10 minutes Approach to Y Garn from the stile

There was one guy on the ascent ahead of me - he was a good way up as I crossed the stile, but I felt that if I dug in I might be able to catch him by the summit. So I pushed hard and reached the summit with my hands on my knees and gasping for breath just as the other guy arrived.

I slumped down and had another bite to eat and drink before taking a couple of summit photos. 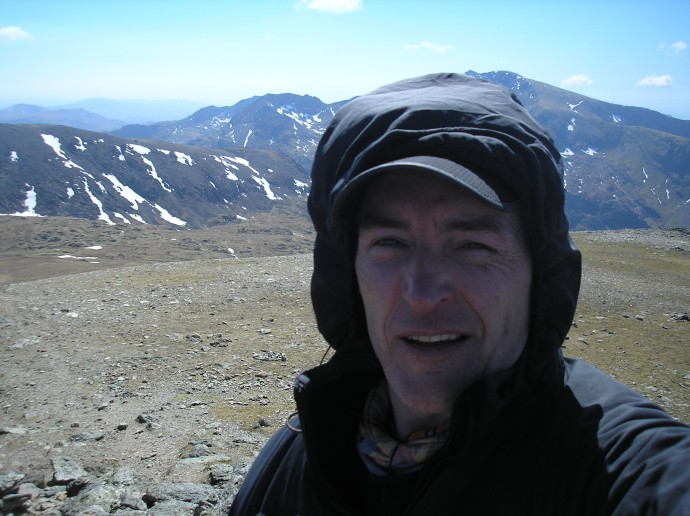 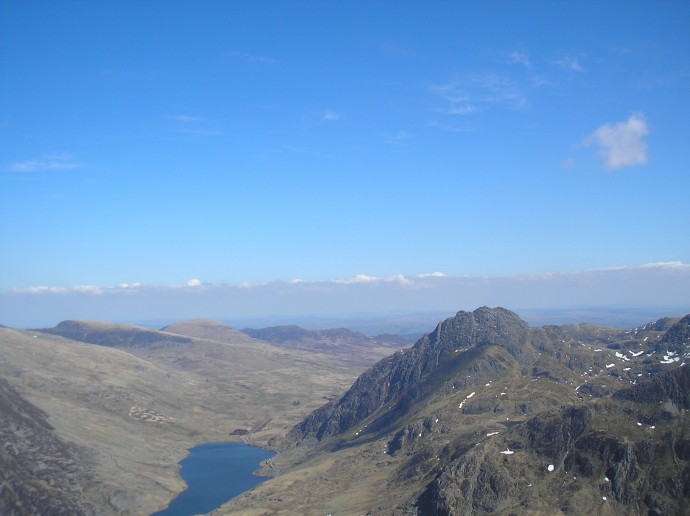 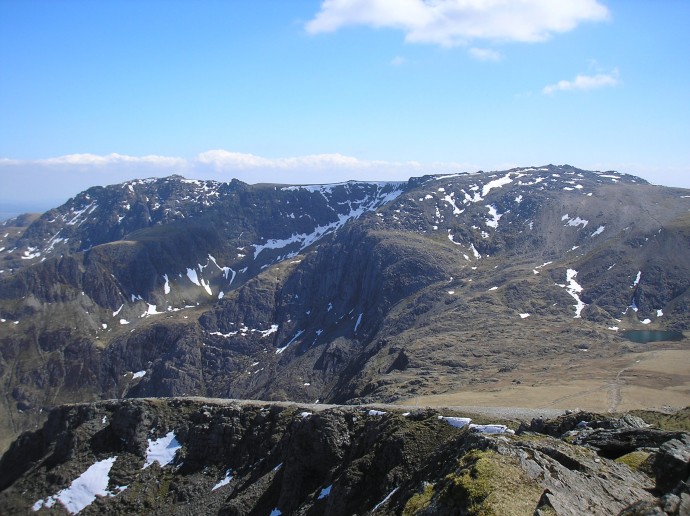 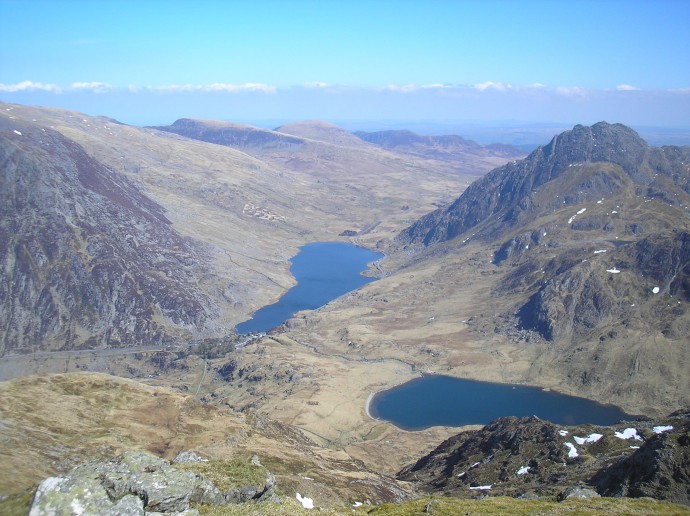 After a few more minutes lying back in the sun taking in the views back along Ogwen valley I set off down the east ridge towards Ogwen cottage where I looked forward to a nice ice-cream from the shop.

Oh well I was now on the A5 and just had a short walk back along the side of the lake to the car. I arrived back in a little over 4 hours and hit the road for home. However, on the way back I popped into the Cotswold store in Betws y Coed and purchased some lighter Scarpa boots for the summer and a new JetBoil stove. Whilst I thought that spending a couple of hundred pounds on some new gear was a nice finish to a day in the hills my wife didn't quite see it that way