I had a arranged a days holiday a few weeks ago and decided, along with my friend John, to tackle the Fairfield 'horseshoe walk' from Rydal.

The weather forecast was less than promising so I thought 'Oh no, not again!'

We parked opposit the Rydal Hall entrance just off the A591 where there is free on-street parking. Booted up and away by 9.45am in the rain of course. You start to climb right from the off and soon leave the hamlet of Rydal. Low cloud was clinging to the hills all around us and so views were limited.

To me, Nab Scar is just the beginning of the long ridge to Fairfield and doesn't possess a major summit experience. The weather probably didn't help to provide any perspective of the surrounding countryside. Just out of Rydal 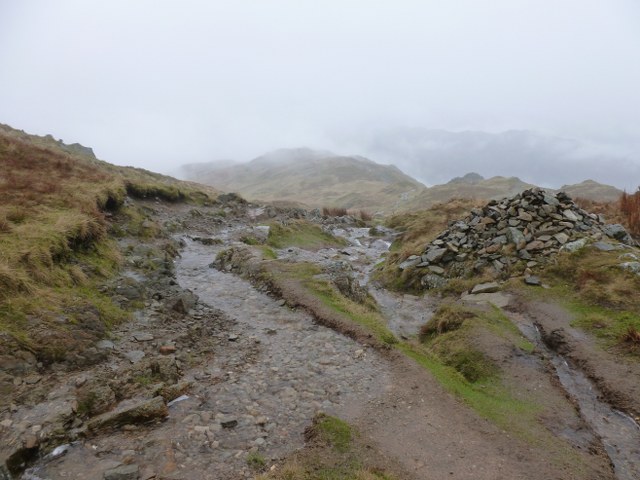 View back down the ridge towards Nab Scar

We soon moved on towards Heron Pike.

As we approached Heron Pike we could see another walker at a standstill not far below the summit. The gentleman had walked directly from Grasmere and was unsure of his position. He was from Australia and joined us as we walked along the ridge to the next Wainwright, Great Rigg. He was good company.

Just south of Great Rigg we decided to stop for lunch and the Aussie continued on. Soon after another man passed by. We finished our lunch, headed over Great Rigg along the small drop and then long, continuous pull to the highest point of the walk, Fairfield. Fairfield is a strange place in the cloud with a number of cairns and a couple of shelter areas, its hard to tell which is the highest point. I visited them all to make sure and then waited for John to join me. As I waited, a couple of walkers were making their way towards me from the Grisedale Tarn direction. When they got closer I realised who they were, the Aussie and the man who passed while we were eating. They had lost their bearings and realised they had taken the wrong ridge. I helped them to go along their way towards Hart Crag (which was also our next target) and bid them farewell again.

John arrived at the Fairfield summit area. We didn't stay long with not much to see. Instead we headed towards Hart Crag and after losing a little altitude, we began to get some views as the mist began to clear. From here onwards the weather improved and we began to see where we were going, and indeed where we had been!! 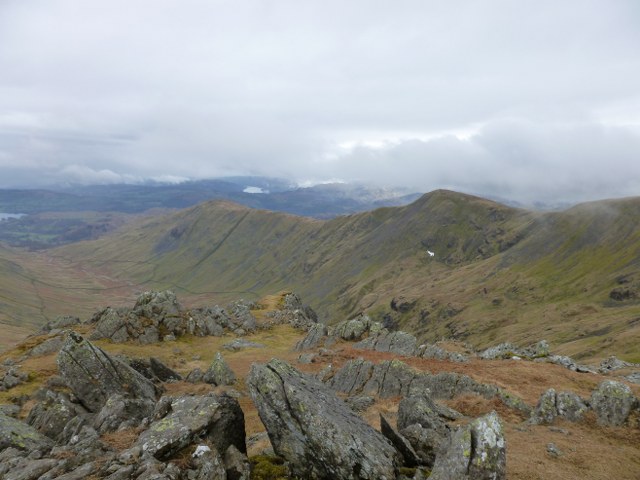 The ridge we came up, so thats what it looks like!! View back to Hart Crag

Onwards towards and over Dove Crag, this part of the walk is dominated by a substantial stone wall which follows the ridge to High Pike and then Low Pike. The air by now, was clear and we had good views all round but especially towards Ambleside and Windermere and beyond to Morecambe Bay. Close up of Windermere We met another walker on Low Pike, an elderly gentleman from Buckinghamshire who was just doing the one fell. We left Low Pike directly west, dropping down its flank and towards the valley floor. Our intention was to cross Rydal Beck just north of the Buckstones Jump waterfalls. There was plenty of water in the beck from the mornings rain so finding a place to cross was difficult, however with the use of walking poles we made it across. It left us with a straight forward walk along a farm track to join our outward track and back to the car. View back to High Pike View to Low Pike showing the beck near to where we crossed.

Always a classic!
I have also been down the wrong ridge from the top of Fairfield, though I was outvoted by the rest and only I picked the right way. Not that i'm bitter or anything.........

Looks like you had a great day up there and though there was some clag, you got some great photo's.
Making my feet itch, to get back in the hills again.