This photos in this report are mainly taken from the last 3 times I have climbed this hill, as the conditions were similar on each occasion.

I really needed to get out on the hills, not having been out since boxing day. A mixture of bad conditions on the roads and deep powdery snow on the hills rather limited options. We were initially headed for Beinn Liath Mhor a'Ghiubhais Li on the Ullapool road (as demolished by John Burgess in a recent-ish report!), but an accident on the road to Garve meant this was out of the question. A quick re-think had us on that good old fallback plan - Carn na h-Easgainn. While possessing almost no redeeming features and being scarred by estate tracks (good for mountain biking though!), it does have a number of good points. Proximity to Inverness and ease of ascent are the main ones, but the expansive views of a large portion of the north Highlands are also a good reason to go up. The views of Strathnairn, Glen Affric, Glen Strathfarrar and the Fannaichs are good, also you can see all the way up the NE coast to Helmsdale and down into the Cairngorms.

Late start and changing plans had us at Lynemore at 11am ready to start. The first section to the house of Lynemore was easy, following a ploughed vehicle track. In the summer, this track can be followed all the way to the summit. If you had the keys to the gate, you could drive up this hill. Today was not like that though. After the house, no-one had bothered to venture up for ages, so we immediately hit knee-deep soft snow. The bottom section was demoralizing, taking a good 20 minutes to cover the first 500m. Things didn't improve much as the main ascent started, but I was fairly upbeat, as I had done this in similar conditions last Febuary, and the snow had thinned out substantially by the 450m contour. "It'll be fine shortly", I told the guys, but it wasn't to be. We reached the upper, more windswept part of the hill, and it became apparent that the wind hadn't done much sweeping of late, and the going remained tedious, with parts of the route up to a meter deep in powder. Someone had been up with a Skidoo fairly recently, and had obviously flown over this terrain in minutes. Finally, after about 2 hours of wading, we reached the summit. It was worth it though. Views to the west weren't up to much due to thick cloud, but the view down to the Moray Firth was spectacular, as there was still mist sitting over the westerly part. 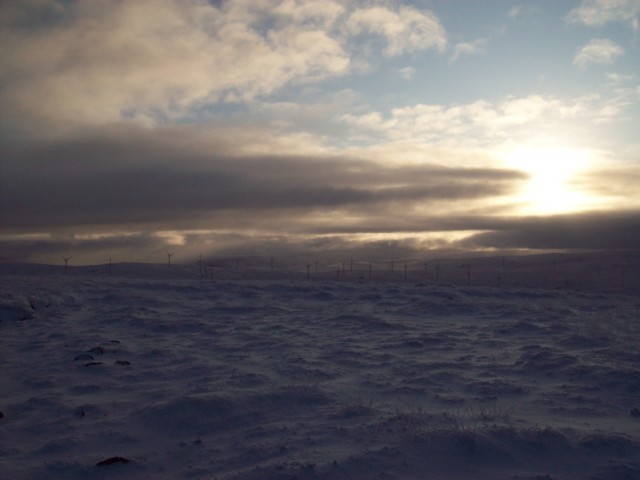 There is a stalkers bothy just under the summit, and we headed over to this for lunch. It was surprisingly tidy inside, although it was rather reminiscent of the sort of garden shed you would buy in B&Q! Inside the summit bothy (Oct 08) View from the summit bothy (Oct 08) The descent was less tedious than the ascent, but not much. At the only stream crossing, Marek managed to break through the ice to get a quick soaking - unlucky! This was a pretty knackering day out considering the length and ascent involved. We were on the top for a fair time, but the actual walking still took nearly 3 hours. Usually I am up and down this in about 50 minutes!

Useful report thanks. I considered doing this one on Friday but glad I didn't now looking at the amount of snow.

Just think of the huge number of calories you burned allowing you to consume and drink as much as you want. The bothy is impressively tidy. Even by my OCD standards.

Thanks for posting this report. We are in Inverness over Valentines weekend and your report has inspired us to try this walk. It looks like there are good views and we like taking pictures as we have a new camera to play with. Generally when in Scotland we do long distance paths, having walked West Highland Way and Great Glen Way as rough campers, so day walking will be a new experience to us. Can you advise what the foot conditions are likely to be? any snow ? Also any other similar walks around Inverness that you could recommend of up to 6 hours walking.

Many thanks,
Ros & Dave
from flat Suffolk.

Funny you should pick this old report to bump up the forum - I was planning on going up here again tomorrow!

The weather just now is pretty unpredictable - couldn't really say if it will settle down over the next couple of weeks. Certainly isn't going to for a good few days.

Up until midweek, things were warmer than normal for this time of year, with snow mainly confined to summits above 700m (although there was quite a bit of ice about in the shadier areas). However we've seen pretty heavy snow right down to sea level, along with high winds. A lot of this has thawed quickly, but I'll bet it will be back again. Just check the photos in the most recent reports in the 'Walk Reports - Scotland' section. You'd almost certainly want ice axe and crampons if you were going much above 700m.

Someone else was asking a similar question so I've put together a list of lower summits and shorter walks in this thread: Click

Otherwise check the Walkhighlands selection for the area. That covers all ranges of length and difficulty.