Beinn_an_Lochain1.gpx Open full screen  NB: Walkhighlands is not responsible for the accuracy of gpx files in users posts

A Saturday hike up Beinn an Lochain in the sun...this is the target Beinn an Lochain from the road

From the lay-by, find a way over the stream and follow a path heading towards the south ridge. Once you start to climb it is fairly relentless until you reach the summit. There is some scrambling involved, but the path is good and there's nothing too serious. Stopped for a wee break about half way up to sit and enjoy the sunshine and the views. 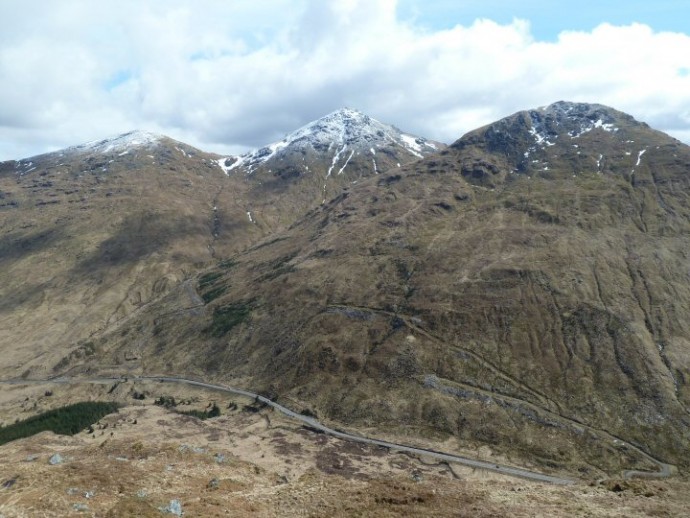 After following the path as it winds up the ridge, eventually you are treated to a view of the final climb. At this point there is a path that leads off to the left that allows you to skirt round the summit to the area of lochans just south of the summit - this is a good return route as it avoids the steep descent that you are now about to ascend (if that makes sense!) There is a north summit marked by a large cairn and a south summit marked by a much smaller cairn. The views from the summit (either one) are excellent, especially if you get good viewing like I had - the paps of Jura were clearly visible to the south west, and Ben Lomond was looking particularly handsome peeking out from behind The Cobbler. Time to the summit was spot on 2 hours. Beinn Narnain and The Cobbler with Ben Lomond behind The south summit, with the north one in the background

A path leads south from the summit for a few hundred metres down towards the lochans and then doubles back to skirt the summit on the west side, through some mildly boggy terrain, to rejoin the ascent path for the journey back to the car.