Wee Guy almost got blown away! But managed 2 more Munro's

Wee Guy almost got blown away! But managed 2 more Munro's


After the usual requests from the Wee Guy that he wanted to get out into the hills all week, how could I disappoint.

Especially because the forecast did not look too shabby. To make it a little more memorable we thought we would throw in a bit of high altitude camping practice. 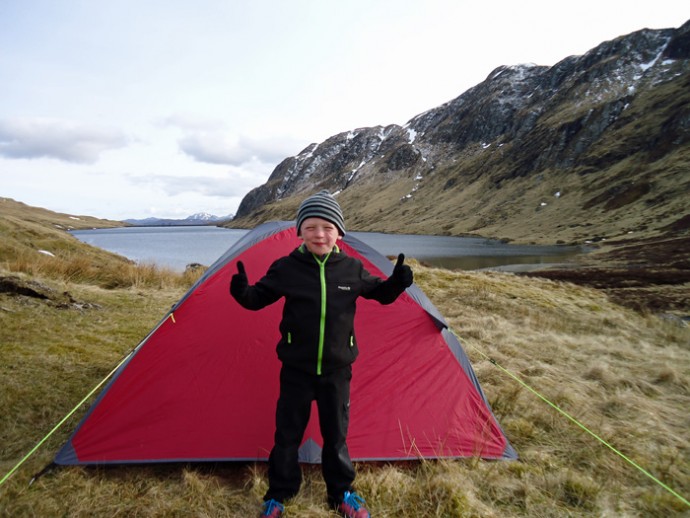 Kyle has got some big plans for the summer which will involve multiple days in the hills so camping will be essential.

Our plan was to drive up to the Lawers range as we still had a couple of hills to climb, we would park relatively close to the truck (just in case). But due to the high road (600m) we could get an experience of what it would be like. We had the tent up for approx. 5pm on the Saturday; all was good in camp, a little chilly due to the northerly breeze. But after dinner and hot drinks we retired to our canvas home at approx. 8pm. The tent was pretty warm due to its small size and the fact that me, Kyle and Marley where in it! All was good until at midnight I was awoken by the tent roles rattling off my head due to the gale which was now blowing, I felt slightly concerned for a moment but once fully awake realised that both Marley and Kyle where still sound asleep…..urrrrrgggghhhh!

So eventually I got back off to sleep and the next thing the alarm was sounding and it was 6.30 and time for breakie! The wind had eased apart from the odd gust, but the rain was coming down. The forecast had somehow gone adrift of predictions, nothing new there! Anyhow we ate the bacon butties, drunk the hot tea and got packed up before hitting the road. We only had a short 2min drive to the start of the route so was heading up hill by 8.30. 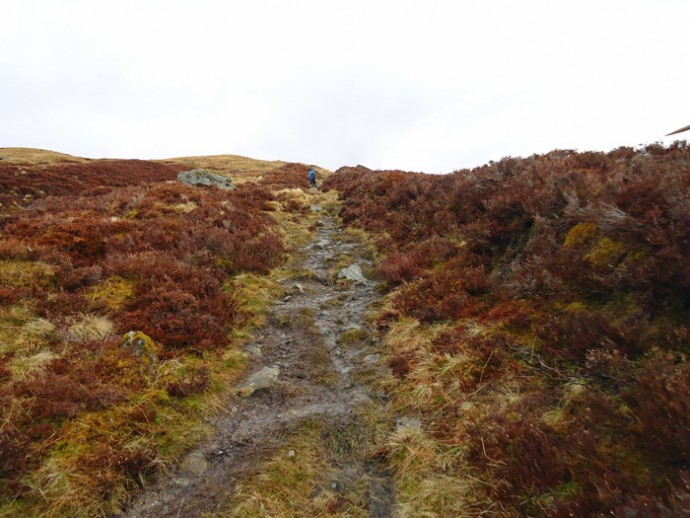 Wee Guy off to a flying start, leaving me behind!

The rain had eased, but showery conditions would be the norm today. We spotted a couple of folks in the distance and I am convinced the Wee Guy was set on catching them from the off, he proper nearly killed me!

The terrain was relatively easy going apart from the bogs, tufts and soft snow! Snow line reached...oh and getting left behind again! Soon we were heading direct for the first summit Meall Corranaich, a short distance before the summit the winds increased. Kyle catching up some other climbers! Refuelling before the summit push!

The wind chill must have been -5 or more, so it was full winter gear on (I thought it was nearly May). We had a quick photo just before the summit and did our celebrations because we knew the summit would be horrendous, we were right! We climbed to the little cairn marked by a fence post and then quickly headed off following the compass out of the gloom towards to lower slopes on the north side of the mountain. This was Kyle’s 31st Munro, Amazing.

The other climbers where on the summit and followed us off down the other side, once in the shelter we had a proper celebration about our achievement before planning our next moves. As it was only just 11am we thought of getting close to Munro number 2 before having lunch. Lunch room with an amazing view!

The second mountain was really straight forward and an easy ascent, Kyle said it could not be a Munro as it was easy to climb!

We found a good sheltered spot for lunch before heading up Meall a'Choire Leith! We hit the flat summit and had a couple of photos; it was still very windy but not as bad as earlier. So 32 Munro's and 7 years old, Awesome! Proud as always. We headed off in a direct route to our starting pointing passing through lots and lots of bogs! To sum it up, it was a great day and glad we stuck it out! The Wee Guy is already studying the books, planning the next adventure! Poor old Marley!