We enjoy hills for a variety of reasons, and some hills press different buttons on different days. For this particular Saturday, Stuchd an Lochain and Meall Buidhe weren’t just summit objectives or ticks on the list, this time they were Munros acting as essential diversionary activities.

I could have spent the day on edge, wishing I was 500 miles further south. I could have hovered expectantly over the laptop waiting for updates or the arrival of texts from friends who would have been close to the action.

Or, I could enjoy the window of good weather and get a pair of Munros under my belt.

The one thing I couldn’t do was be in London hoping the Rovers would snatch the final point to secure automatic promotion. The prospect of snatching defeat from the jaws of victory was a distinct possibility, and there would be nothing I could do to affect the outcome if I just hung around all day. The sceptic or pessimist in me suspected I was going to need to get my consolation in first. At least I’d have the achievement and enjoyment of another two red bubbles turning blue even if I was to be denied the vicarious success of celebrating promotion, or the precarious prospect of the play-offs.

Slopes of Coire Ban from road to Loch an Daimh

In true cliché style, the Glen Lyon pair of Stuchd an Lochain and Meall Buidhe would be my own “game of two halves”, and maybe I could find some injury time reception for medium wave to catch the outcome of the match.

So, I was away before 7.00am: body and spirit heading off in opposite directions.

Fresh snow cloaked the tops as I turned off the motorway and headed towards Callander. Previous confidence that I wouldn’t need crampons or an ice axe started to shake, but it was too late now: they were still hanging up in the garage.

The drive over the Ben Lawers road to Bridge of Balgie gave reassurance that conditions weren’t going to be too icy, but the biggest surprise of that part of the approach was the change to the hillside. Where have all the trees gone? The whole nature of the approach from the shore of Loch Tay has now been completely changed by widespread felling: gone is the building excitement of zig-zagging through the trees before bursting out of the forest to the views ahead.

But it was now down into Glen Lyon and up towards the start of the walk. Not knowing the protocol of the gate across the road just before the end of the road to the Loch an Daimh dam, I just parked up and set off. It added 2.5km to my day, but hey, you always need to warm up before a big match.

Attack being the best form of defence, and still being fresh in the morning, I chose the steeper ascent of Stuchd an Lochain first: get it over with.

Loch an Daimh from the dam

Once beyond the dam the path upwards soon appeared at a nice easy angle to begin with, gradually gaining height while a reasonable distance passed as well. Then the path turned left and abruptly upwards, just as expected, and made all the more interesting with the slushy fresh snow making some of the steeper grassy stretches “interesting.” Added entertainment came from the occasional plunge into a deeper drift of the fresher snow that must have fallen over the previous couple of days. 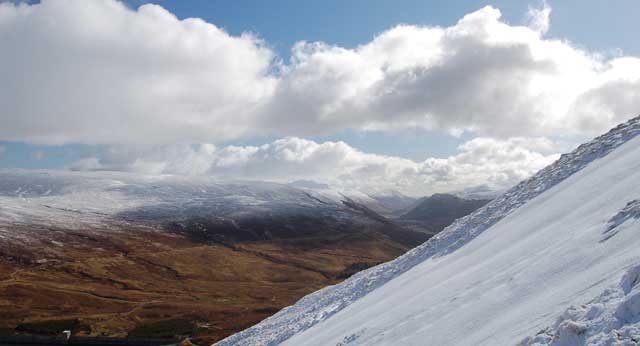 Down Glen Lyon from slopes of Coire Ban

Nearly an hour later the ridge was reached and the first period of pressure had been withstood; hopefully the worst was behind me.

With each breather, I kept looking back across Loch an Daimh to the rounded dome of Meall Buidhe that filled the foreground; a constant reminder to leave something in the tank to cope with the second half. There’d be no luxury of substitutes in this game. Across to Meall Buidhe

Back to the task in hand, another strenuous stretch alongside the ubiquitous rusting fence posts followed. Views over to Sron Chona Choirein and round to Stuchd an Lochain were soon revealed, and the walk round to the Munro’s summit provided easy walking to stretch the legs. Yet more fence posts were followed, and a pleasant chat with the first of many folks met during the day was enjoyed.

Stuchd an Lochain from above Coire Ban Final slopes of Stuchd an Lochain

The top was reached in just under two hours, with some of the abiding memories of the day: views in two directions capturing the essence of the Scottish Highlands. To the east down Glen Lyon stretched the archetypical glacial glen of shortbread tin images with peaks to either side. To the west was Rannoch Moor, dark and forbidding, bleak and exposed, with the back drop of snow-capped mountains emphasising the power of the landscape.

Simply magnificent. Time to soak up views that define the word “panoramic.”

Rannoch Moor from Stuchd an Lochain

From the Ben to the Buachaille in one direction. The Perthshire hills spread out in the other, from the upturned hull of Schiehallion to the pyramid of Ben Lawers. 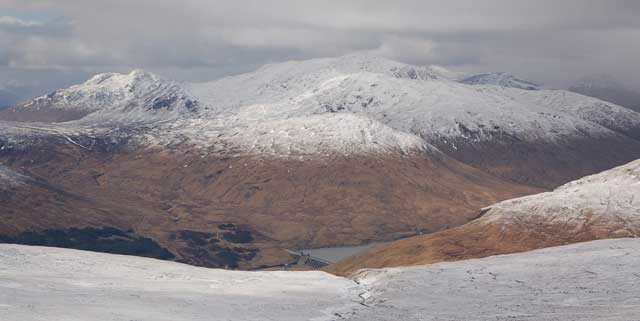 Beinn Heasgarnich and Loch Lyon dam from Stuchd an Lochain

By this time, the wind had a bite, so it was time to move on and see if the promise of getting down in “little more than an hour” was a vacant promise or not.

Viewpoints down Glen Lyon delayed progress at the sort of spots where you could spend ages on a warm summer’s day taking it all in. Despite plunging through soft snow, or gingerly descending the odd stretch of steep wet grass, I was still on my timings for the start of the second half. Nothing gained, nothing conceded.

Meall Garbh, An Stuc and Ben Lawers from Stuchd an Lochain 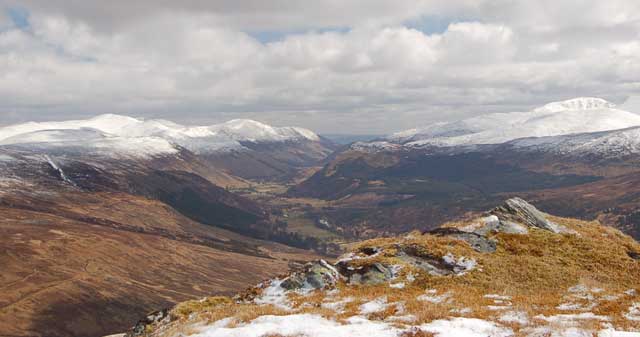 Down Glen Lyon from above Coire Ban

If it was still 0 – 0 at half time later in the afternoon elsewhere I’d be happy.

Having seen Meall Buidhe during the morning I knew it wasn’t going to be an exciting climb; more of a dull trudge. It’s not the most inspiring of hills but, as with many unassuming rounded humps, it’s the position that counts.

With hindsight, I doubt I took the recommend path from the lochside track. I soon lost any consistent line and was dodging in and out of peaty hags and boggy hollows. However, on the horizon, the bealach between Meall a’Phuill and the southern end of the Meall Buidhe ridge was always there as a target. As long as I was still going upwards and heading in generally the correct direction, I didn’t really mind.

In just an hour I was at the jumble of stones masquerading as a cairn at pt 917. Any recent snow must have been wind-blasted from the stretch of flat ground that now lay ahead to the summit at the far end of the ridge.

Like on Stucdh an Lochain, the views were just mesmerising. Over Rannoch the Buachaille guarded the entry to Glen Coe, the long flat ridge of Stucdh an Lochain stretched across the valley and from this direction the pyramid of Ben Lawers looked just like a mountain should do. Closer to the summit, and although the cliffs that drop to the east may not be towering, they were still sufficient to present a line of impressive cornices. 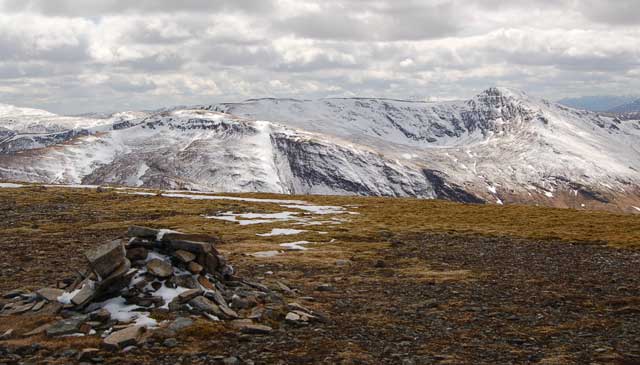 Looking back across to Stuchd an Lochain from Meall Buidhe

Company and conversation added to the amble along to the summit cairn, with the opportunity to huddle down in the lee of the cairn to enjoy a belated lunch before starting the descent – as kick-off time approached. 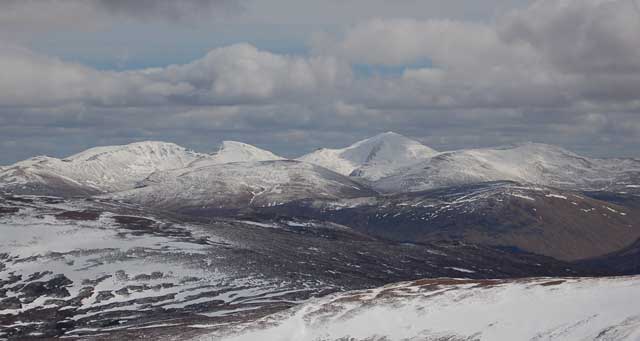 Meall Garbh, An Stuc and Ben Lawers from Meall Buidhe

Once below the belach between Meall a Phuill and the Pt 917 I saw the vestige of the upward path that I must have missed running along the spine of a rib to the left of Coire nam Miseach. Once a boggy dip was crossed a more direct descent back to the loch was begun.

As I always do on parts of a final descent I mutter “concentrate, concentrate.” But was I telling myself or the Rovers? Don’t let it all go wrong on the final stage. No last minute slip or defensive error. “Concentrate,” or should I leave that to stalwart former Hibs man Rob Jones at the heart of our defence.

Back at the car park all that was left was the walk back to the gate and the frustration of knowing that I could have used it, saving fifteen minutes at the beginning and end of the day. An additional 15 minutes – oh, I hope not.

Strolling back I pondered on a pair of worthy Munros, glad that I’d chosen to get out for the day and enjoy the panoramas they offered – to say nothing of yet another last gasp burst of winter. It seems a long time since a snowy late November on Creise.

Finally, with crackly MW reception and perched in a pull-in on the road back over to Killin, I was able to experience the up-down-up – down-up of the final mad thirty seconds of my footie season.

Talk about icing on the cake of a perfect day – just champion lad.

Re: A diversionary Glen Lyon pair and promotion – just champ

The views most certainly are splendid from MB. A great effortless Munro with fantastic 360 views.