You know you better prepare for a bit of a bad hair day when a munro's name translates into English as "windy peak". As expected the name turned out to be something of an understatement, a bit like describing Usain Bolt as nippy on his feet. If you tried to fly a kite on Sgor Gaoith on Sunday, chances are it would have flown you, kit and caboodle, to Braeriach and beyond. Aye, it was a bit blowy indeed.
If you are looking for a place to blow the cobwebs away, then a quick burn around Sgor Gaoith could be the perfect solution. The start point takes you east through the woods leading into Glen Feshie. Even though the route is pretty short the ascent feels fairly gentle as you gradually climb high amongst the old pines. Looking back, the big hills of the Monadhliath were shrouded in cloud, giving a hint at what lay ahead for us. We had been around them the previous day in pretty fine conditions although that big walk, combined with the exploration of the Balvennie 15 year-old and late dinner that followed probably slowed us up just a wee bit as we moved ever higher.
We added an extra layer or two before we hit the snow line and started our ascent up to the plateau. It would be nice to say that the views were fine at this point but.... back to glen feshie and monadhliath beyond 
Rain became snow and as we got higher the wind started to whip up fair hoolie. 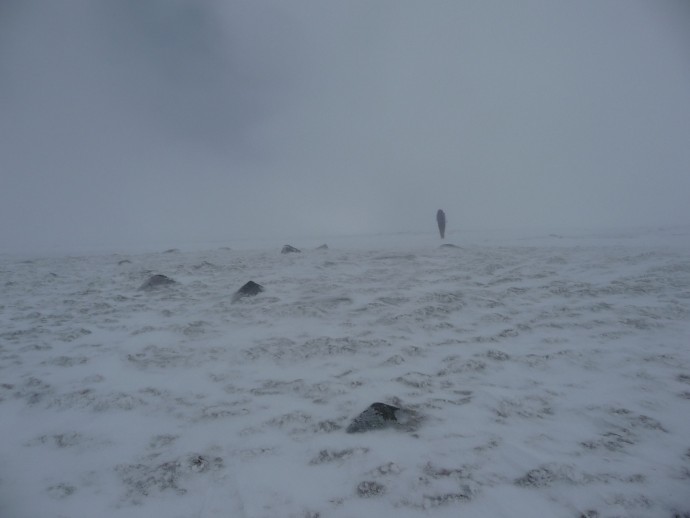 Conditions underfoot were fine in the soft snow and the slope was never particularly steep but as we eventually levelled out in extremely poor visibility we knew we had to be very careful as the cornices and cliffs were just ahead.. cornice south of the cairn cornice just north of the summit hanging above cliffs

In the glaur, the summit briefly revealed itself ahead and on it a solitary grey figure appeared totally static beside the cairn. The recent dump of fresh snow meant that getting too close to the edge could have been deadly; big cornices lipped out over the cliff tops in both directions waiting to collapse under the weight of an unsuspecting footstep.
As we got closer the cloud swept past, obscuring and revealing this silhouetted and unmoving figure. As the wind gusted and whipped fresh snow in our faces I wondered if the Grey Man of Ben Macdui had fancied stretching his limbs and was waiting to greet us. In fact the Grey Man was no Big foot, he was a friendly walker who was struggling to eat his pieces without sending them flying off the cliffs and into Loch Eanaich. He was probably so still because up close you realise how close the cairn actually is to the edge of the cliffs 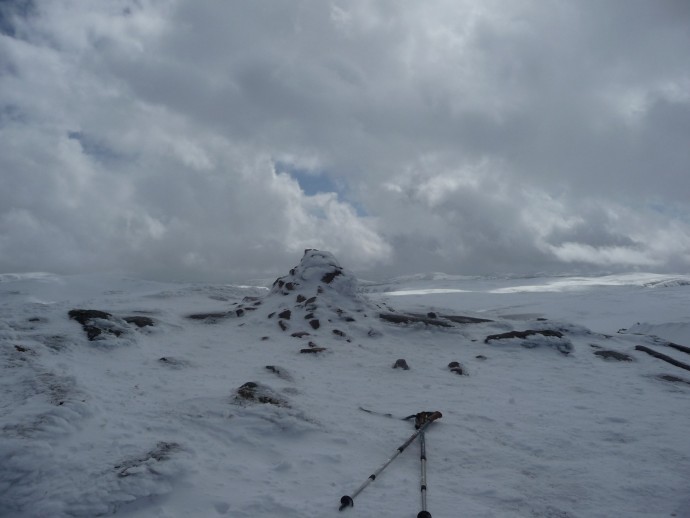 This was approximately the point where we struck it lucky and we were fleetingly rewarded with some magic views which the camera doesn't do justice to. The wind gave us a "considerable buffeting" as we enjoyed the spectacular, but all too brief, glimpses across to Braeriach to the east and south to Mullach Clach a' Bhlair. So, although we would have loved to linger longer in the hope of the views really opening up, the wind sent us on our merry way again. On a better day we would have probably headed over to the check out the vistas from Sgoran Dubh Mor, just a hop, skip and a jump to the north. However, with the hill more than living up to its name, we headed north-east, aiming down towards Gael-Charn and the chance for a break from the gusts which had moved from giving us a buffeting to a battering. 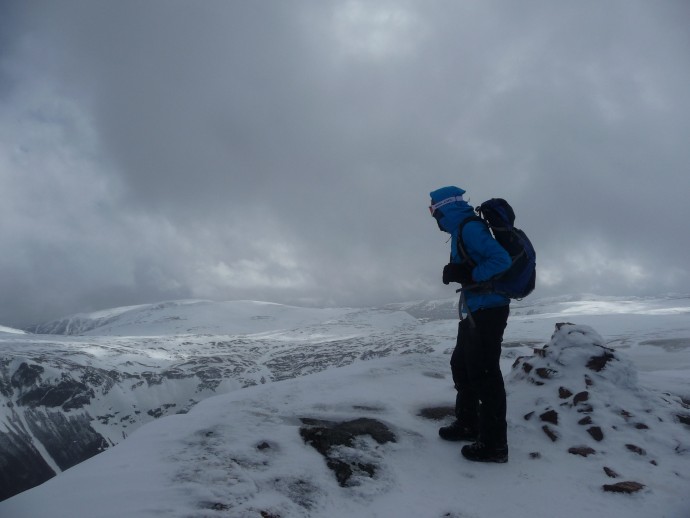 a wee peak over the edge down to Loch Eanaich 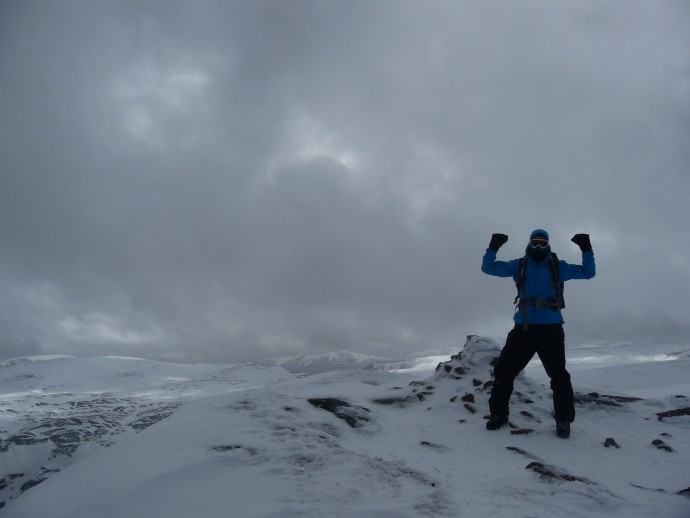 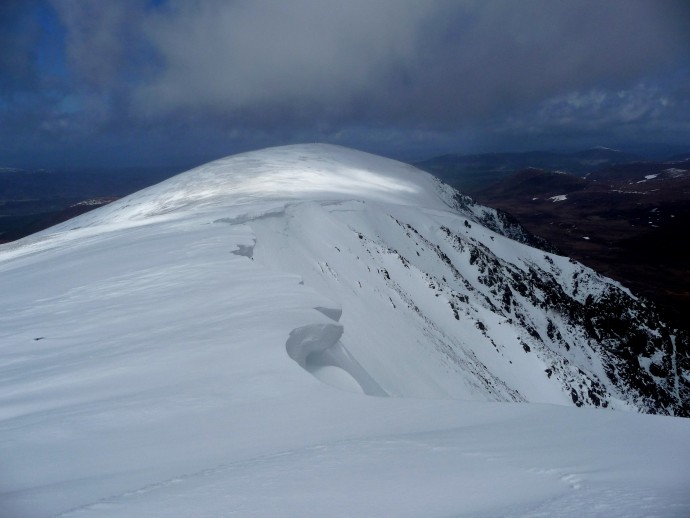 cloud swept away to reveal drop; Sgoran Dubh Mor in the near distance 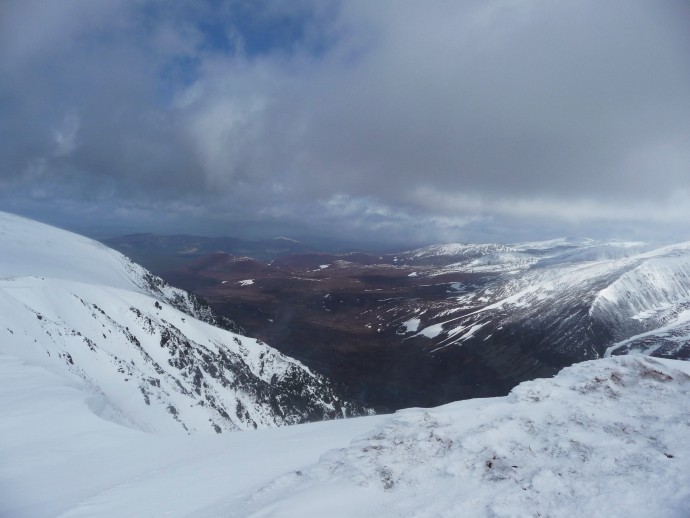 It is only recently that we have started making trips into this area and the chance to see so many of their peaks with their winter jackets on has been great. The Braeriach to Cairn Toul traverse is high on our to-do list but we'll save that for more benign conditions. a view from a balaclava 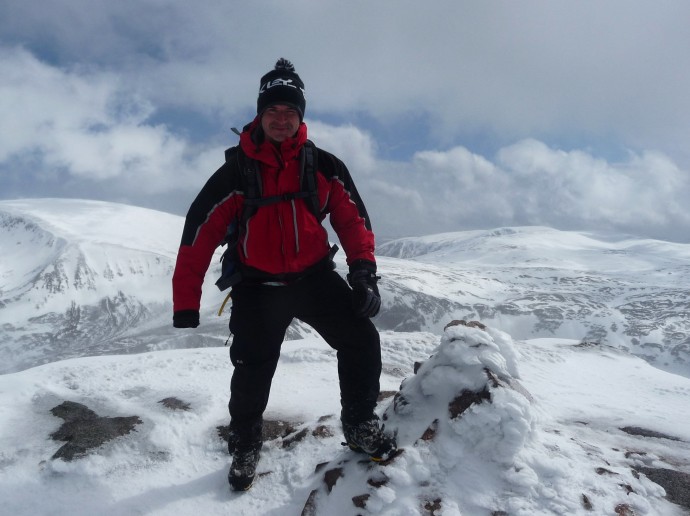 route back off the summit plateau In a bid to take the sting out of the wind even more we opted to descend directly into Coire na Cloiche rather than continue over to Gael-Charn. The descent down to the Allt Coire na Cloiche was steep but straightforward and it was a blessed relief to be out of the gusts. 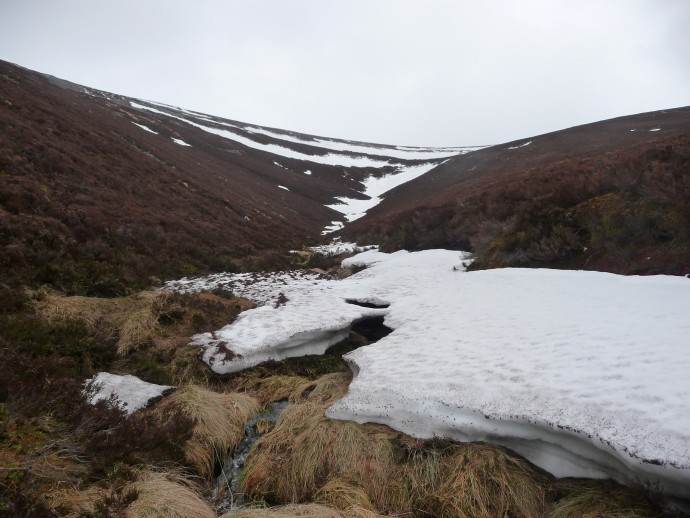 It had been our quickest day out of the year so far and a very enjoyable one. The mixed terrain and the vantage point of the summit make for a fine shorter day out. Leonide even found time to get in a spot of bouldering before we popped back onto the path leading us back into Glen Feshie where the sun dappling through the pines made the peak seem miles away. So what's in a name then? Sgor Gaoith is a little too understated. If we have Sgor na h-Ulaidh out to the west then maybe this is the windier cousin in the east. Sgurr na Hoolie Mor, the Hill of the Big Buffets. The translation might also refer to the bits of folk's lunches likely to be scattered around the slopes when the wind picks up.

Re: Blown away by the Windy Peak

Some amount of snow still around

Nice report and well done for getting out in those conditions...I appear to be chasing the weather these days

Re: Blown away by the Windy Peak

Cheers Paul, have you become a fair weather walker now? Actually, chasing the weather's no bad thing. It happened that Sgor Gaoith was just about the best we had on offer last Sunday .Hoping for better views in Snowdonia this weekend. Catch you later dude.