I was in a Big Sky state of mind as we moseyed on down the path into Glen Banchor. You could blame it on watching too many cowboy films as a young 'un or you could blame it on the combination of an early start and a can of rocket fuel on the road up but in my mind's eye, this part of the country is more than a little Montana-ish. On the long and winding road on a beautiful spring morning we even passed a Little House on the Prairie style ruin. Only a matter of minutes into the walk a comfortable feeling of remoteness settled, something that only deepened as the walk went on and we headed onto the great plateau of the Monadhliath above. Yes sir, there can't be much finer to do than set your steed for a day's ramblin' through them there hills. 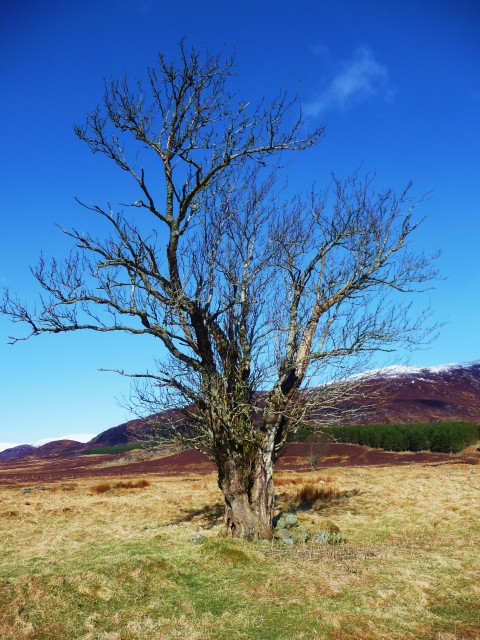 The sense of space was lost for a while as we turned to follow the Allt Fionndrigh upwards but the weather continued to be fine and the going was good on the easy path. Beyond the bridge things turned boggier and all of a sudden wilderness beckoned. Plenty of fresh snow helped to mask the boggy hags which I wouldn't fancy crossing in warmer or wetter conditions, I imagine it could be a an excellent setting for a bog-snorkling festival. A straightforward pull out of upper Gleann Ballach took us onto the plateau where the views opened up for miles around. Leonide's previous experience of these hills had been a 12-hour whiteout epic a few years ago. This time, we were both treated to superb visibility for this part of the walk on the western side. In the far distance, we could see our final peak, A' Chailleach, hours away and miles across the glen. I enjoyed the bizarre sensation of looking down from the summit of Carn Dearg to see the opening titles of Eastenders. Very little height is gained or lost from this point all the way round to Carn Sgulain and on such a great day, we were happy to take it all in at an easy pace and enjoy the peace and our pieces. It is a fairly featureless area although we were lucky to enjoy views far into the Cairngorms in one direction and to Creag Meagaidh and company in the other. In less favourable conditions the fence posts would be a great navigational aid as they go straight over to munro 2 of the day. Mind you there is also a fencepost junction on the top of Carn Ballach so unless a walker fancied a detour to Drumnadrochit, compass and due care would be essential. Sometimes a slower pace helps you spot the finer details. the view back to the summit of carn dearg The summit of Carn Sgulain is a fair old hike away and it is not a place that many would be likely to linger on, given that you reach it either with the big cairn of A'Chailleach beckoning you onwards, or because you still havethe trek over to Carn Dearg ahead. a pile of rocks marks the spot A'Chailleach in the middle distance

After 18km, one final slope of ascent took us to our final summit, where all of a sudden, civilisation, in the form of Newtonmore, seemed like no more than a snowball throw away. We took a fairly direct line down from A' Chailleach, effectively heading straight for the town, rather than detouring south-west and south-east again. On the way down we bumped into this cool guy. As we descended the slope the little iron shelter in the distance grew larger and we popped in for a wee nosey. It was exceptionally clean and seemed perfectly water proof although there was clear evidence that the sheep in these parts can open doors. Had a wee chortle at the page of regulations that someone had drawn up and left and also enjoyed checking out the various signatures/ graffiti on the walls. Some names dated back to the 1920s and 30s which gave the hut a small sense of place and time on the hill. Further down, a final obstacle had to be negotiated. We knew that the alt would be in spate because of all the recent snow melt so we would have to deal with wet feet higher up or a dodgy bridge crossing further down. The bridge is taped up on both sides and has a warning saying it should not be crossed... Without any mishaps, or wet feet we were soon back to collect our wagon, with the big open spaces behind us. Until next time. After reading that made me want to head on up to the majestic Monadhliath, great read and fantastic photographs, wow! Weather looked perfect, some of the cloud formations along with the sun bursting through, awesome. Snow cornice, fantastic. East Enders photo and cloud pushing, clever. Moss heart, as you say, keep those eyes open and don't rush by. Snowman, yep all in all a fun day out.

Many thanks Rodmiester, it certainly is a majestic place

Good report cowboy enjoyed reading it. Liked your eastender photo and looked as if you had a good for views.

Hoping to head there tomorrow was it icy on top or any parts of deep snow, was thinking of trying it anticlockwise, did ye get across river higher up

This report has a great title. To me, this is an advertisement for the much neglected Monadh Liath, pointing out exactly what to expect of these hills.

Tomsie, didn't get a chance to reply before the weekend but would be interested to hear how the snow conditions have changed. The only very small area of hard snow was on the way to Carn Dearg and it was avoidable.

Klaasloopt, thanks for the compliment about the title. I love the wide open spaces of this area, not sure if I would like to see it swarming with walkers, unlikely as that may be!

Deep in places and snowed most of the day