started out at 0700 hrs in a taxi to get me to the start point, in my rucksack for the first time were crampons and ice ax the weather was still but a layer of cloud was at approx 2500 ft covering the tops! 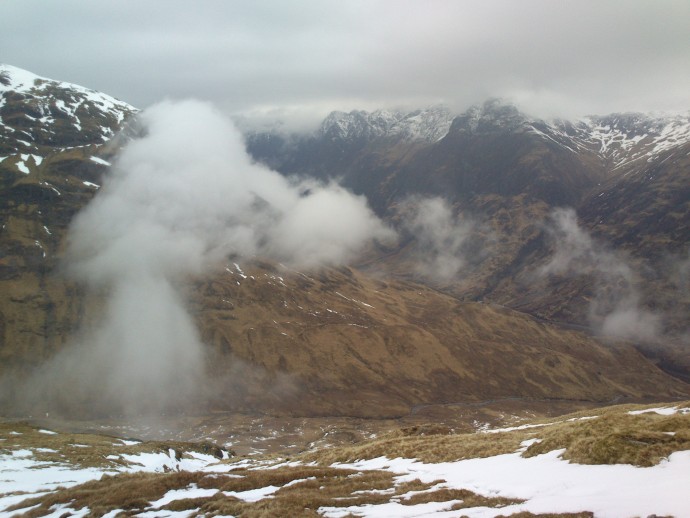 The walk up mam buidhe to the col on etive beag is not to much of a slog and the veiws over to the mamores and the grey corries get better as you get higher.At the col I turned left and went up stob coire raineach this is quite a rock strewn top and there was litlle snow on the route up to the top The wind had got up a little now, as promised, so no hanging about and off to bag stob dubh stopping to get this pic on route of the col and the northern end of the stob dubh ridge Once on the upward slope it was time to don the crampons and break out the ice ax the snow was wet and the avalanche forcast for that day was not a good one, so for a time on this slope I was well out of my comfort zone worring about man triggered avalanche but on getting to the ridge top all was well and the cramponed walk to the summit along the ridge and back was a real joy. I then managed to glissade down the south east side of etive beag to go and do etive mor but half way up and after a spot of lunch the snow in coire altruim was very wet and hard going and with the threat of high winds later in the day andi thought prudance was best option so i left it for another day, it took the shine off the walk but at least i am still here and not under a load of snow!!!! From here it was just a slog back to the SYHA all the way down the a82 following the old road at times the veiws are great but the mad buggers in cars ect think they are at a grand prix!

looking down glen coe aonach eagach ridge on the right, NW end of buachaille etive beag on the left

You must have felt fear and excitement about using the ice axe and crampons.

Glad you enjoyed the experience though and a good call to leave etive mor for another day.

CMD and Nevis is a great route for winter