Sunday Morning, Up at 6.30am, The plan to walk up the path to Beinn Ime first and if we have time To do Beinn Narnain on the return. Planned the route in Satmap software and entered our walking speed, 1.5 kph, always add what I guess is going to be half our actual walking average, this way I can see if we have enough time to complete the walk before dark.
Looking good, quick check of this site and it gives 6-7 hours, roughly same as my calculations.
Wrong, took us 6hours and 40mins to just get up Beinn Ime and back to the car, Starting at sunrise and back as the sun was setting, First Munro of 2010, but hardest walk we have ever done.

2010-01-10Beinn-Ime.gpx Open full screen  NB: Walkhighlands is not responsible for the accuracy of gpx files in users posts
We had done the cobbler last year so knew the path up to the top of the valley, This was the usual if not icy zig zag, we made it as far as the bench, then the crampons were on, this may have been too soon, but falling on the lower slopes was a risk. When we reached the Dam the path was less icy and more compact snow, but crampons were now on so we carried on. At the bench, getting crampons on and a wee robin comes to see if there is any food Path up, not too bad just compact snow Crossing the burns on the path Nearing the top of the valley, looking back the way we had come 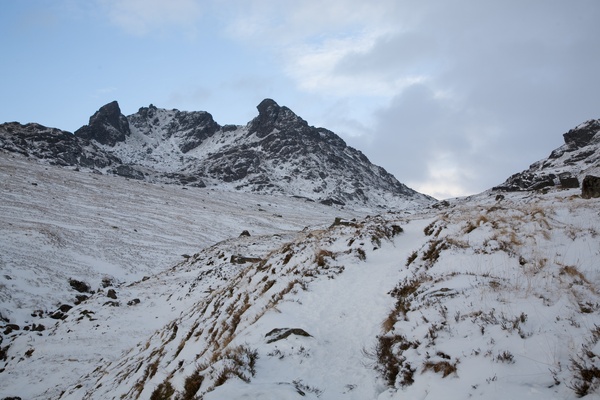 We finaly made it to the top of the valley and were deserted by the other walkers who either went up the cobbler or turned back, The wind had now hit us, we sorted out our clothes and set of with GPS in hand. It was a long steep climb, at 900m the wind was gusting, knocking you onto your knees and the ice axe was brought into play a few times to reach the summit. The wind was so strong we crouched at the summit, took some pictures and got off as quick as we could before we were blown off. 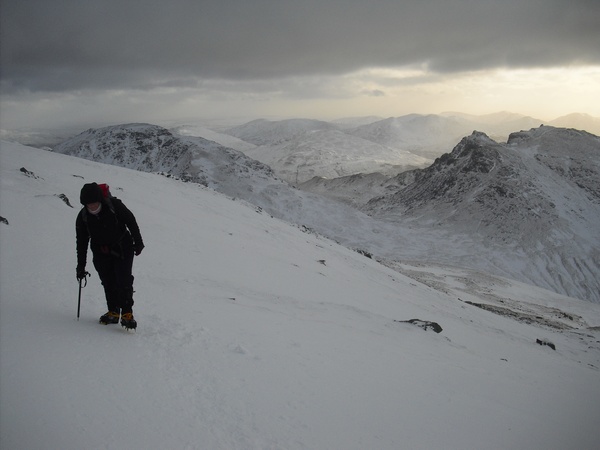 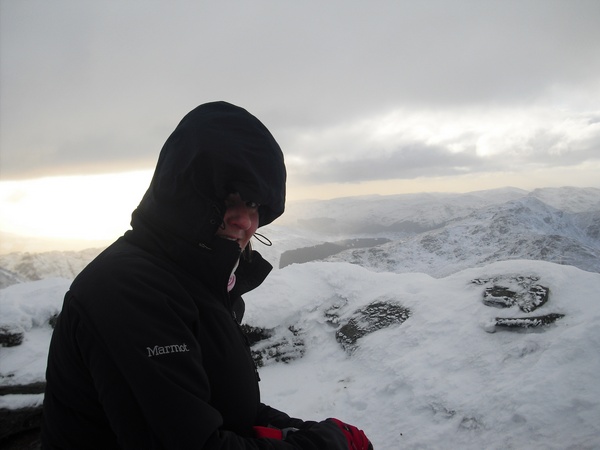 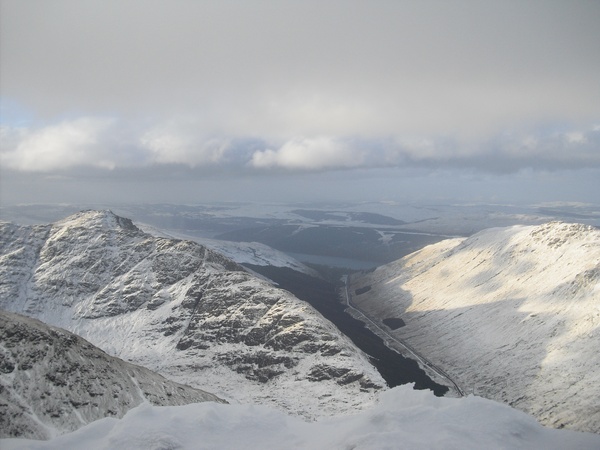 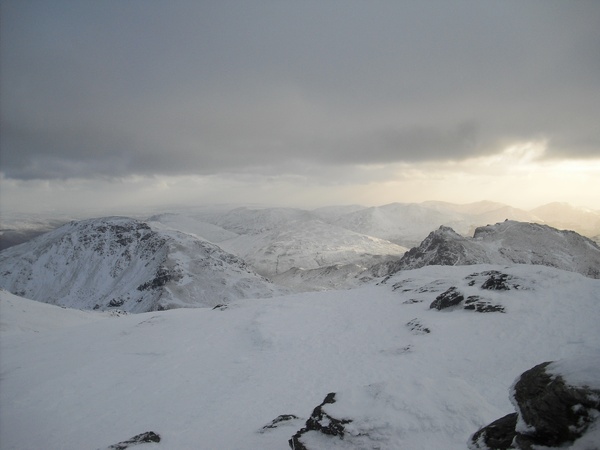 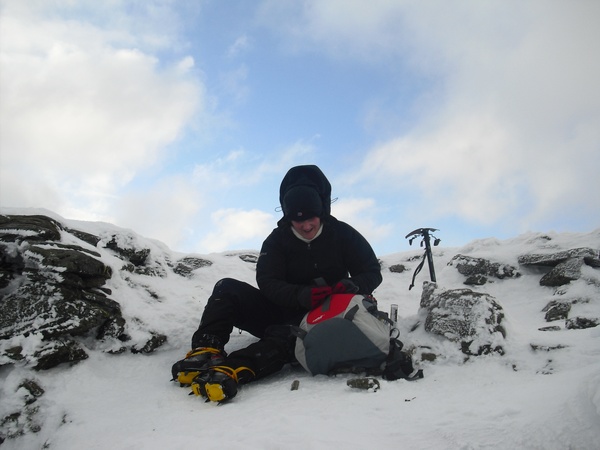 The trig point minus the trig? So windy I dont know what direction the camera was pointed Ben lomond in the distance Trying to stand up

We set off without any lunch, had tried to find shelter but lost one sit mat in the wind, and it was now past 1pm. The desent to the 800m mark was slow, once out the worst of the wind it was then a slow trog back the way we came. We were not cold thanks to all the new clothes, but fatigue was setting in, by the time we found shelter and had some food it was 2.30pm, I took off my crampons, a mistake so at the start of the zig zag path they went back on. Knees were in bits by now and we stumbled back to the car. As we have only been doing this for 10 months it has shown us that we are still not fit enough for 7 hour trogs in the snow. All in all great day out but took a lot longer than planned. Comming back down Ime 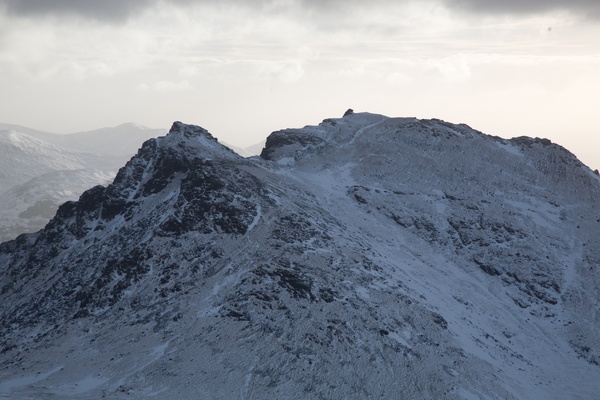 Beinn Ime ice and snow all the way Looks COOOOOOOOOOOld.
Think you got better visibility on Sunday than i did on Saturday though i never had the wind to contend with on Cruach Ardrain.

Your shots are great.

nice write up and pictures, man yous got better views of ben lomond than i did, and i was on the damn thing, total white out at the top on sunday.. looked a good day for yous

Couldnt have asked for better views, from 800 metres the wind was blowing gusts of ice and snow into our eyes(dont know the technical term) so you couldnt realy stand to admire the views, I was carrying a small compact camera and my DSLR, the batterys were draining from fully charged to flat every 20 minutes so didnt take as many pics as the scene deserved. We could see the snow swirling around Ben Lomond, looked good from our view.

At the top I had put my DSLR away half way up so it didnt get in the way, so only used my wee compact to snap at the view, if it hadnt been so windy Im sure I would have spent ages up there snapping away. haha I swear to god that is the same Robin that accosted me for food at the bench on the zig zag path on my way to A'Chrois yesterday as well!!

Also.. we also were admiring the summit of Ben Lomond yesterday. Had an Everest summit look about it. Lovely pics - especially like the ones of the Cobbler from the back - not seen that view... in fact, never saw any of it before and I've done all those!

I will be back to those 3 sometime though - just I'm gonna choose a better day.

Hope someone fed the poor robin out of the various groups who've seen it!

He looks pretty well fed to me in my picture...

After Sunday the wee hills look like a good idea

Milesy wrote:He looks pretty well fed to me in my picture...

That's how they all look in winter - they're not fat, they've got their feathers fluffed up to try to keep warm!

Thats my excuse as well