I found this tough on Saturday.

I was first in the layby off the A82 and with the MWIS forecast saying 90% clear tops with sun
and blue sky's i decided to go ahead and do this on my own.Knowing this would be a popular hill
in the forecast weather and conditions i knew i would not really be on my own.This proved to be correct
as there were 7 or 8 cars in the layby as i finished my walk and the majority of these folks were
heading for Cruach Ardrain.

The temperature on arrival was a balmy -1c,it wasn't long before layers had to be removed on the wade up through
the snow to Grey Height.The weather was certainly not as predicted with cloud down over the summits and very flat
light giving poor definition. Heading up the path after going under the railway.The 2 guys in front would break a nice trail up Cruach.Sron Gharbh on the right. Grey Height came into view with the ridge to Cruach stretching out ahead. The cloud lifted from An Caisteal and Beinn a Chroin,on the other side of the glen. The route up to Grey Height was heavy going with at least foot deep powder.

Once on top at Grey Height the underfoot conditions improved greatly with a light dusting of fresh snow but no deep powder to cope with and going was pretty good with not much Ice either. Looking along the ridge to Cruach which is shrouded in cloud.Most of the deep snow been blown clear i guess.

A good walk along the ridge and then the killer blow,a very steep section for the last Kilometer up to the summit.Probably the steepest section i have walked so far which was sustained for that distance.When i reached
the top there were another 2 guys heading for Beinn Tulaichean but i declined joining them as i was just too Knackered and did not want to go further as i knew the walk back was going to be enough without me starting to stumble about the place. Where,s that summit.The cloud had closed back in.2 guys in front of me are just to the bottom right. 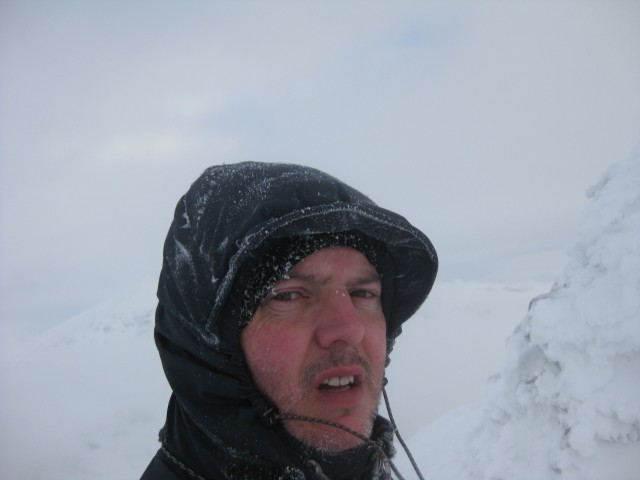 Do i look tired.?

The wind on top had a real bite to it and just started to blow a bit harder as i got there,at least it cleared some of
the cloud and i got a bit of a view and the sun even tried to send down a couple of shafts of light. The sun is up there somewhere trying to shine on An Casteal and Beinn a Chroin.

On the way up i had taken off my heavy gloves and only had the fleece liners on,before i realized it on the summit my hands were freezing and it took me all my time to open the zips on the rucksack and get a dry liner pair out and then my
heavy gloves on top,my hands then started to thaw and it was so painful, like putting frozen feet in a hot bath.Another
lesson for me today,i think a couple of minutes more and i would not have got the zips on the sac open and been in trouble. View back down the ridge towards Grey Height.

I met a few groups heading up when on my way back.The last of these was 3 young guys maybe late teens,early 20's
who were only half way along the ridge and it was nearly 2pm.I recon they had another 1.5hrs to go to the top and they said they were also planning to go to Beinn Tulaichean as well.I asked them if they realized what time it was and that they had a long way to go even to get to Cruach in the light they would have left,never mind another top and get off the mountain.They carried on anyway,hope they were ok.

At this point the cloud had closed right in on Cruach and the snow that had been falling was getting heavier and heavier. Snowing on the hill and heavier all around. 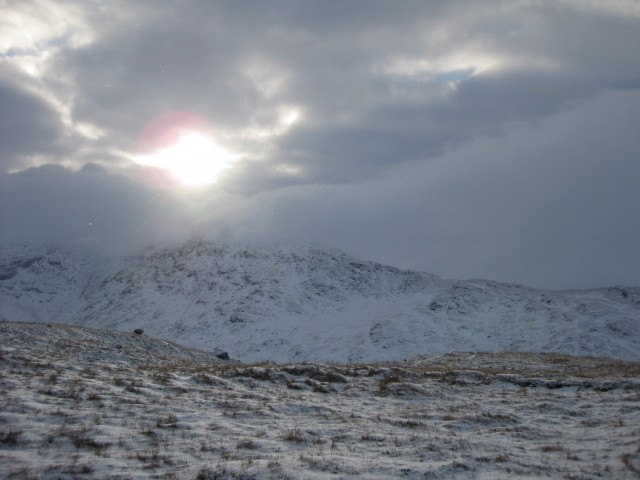 The sun had one last try and then gave up and went to bed.

The rest of the walk back was easy going and i was so glad to get a seat and my hot tea at the car.

I don't think i will do another winter Munro without company.

Shame really - Cruach Ardrain must have some nice views.

Looks a bit of a battle

Sat on a bench overlooking the city for a bit too long without gloves on - happily drinking coffee and taking pics. Just before I went to go I realised my hands were freezing! I got going and put gloves on but they didn't seem to be helping - ended up curling my hands in a ball and using normal gloves as (badly fitting) mitts!

good effort david ...i did tell you regards the cold though

yourself ...dunno ..you would have to be confident ..no doubts at all

takes a lot out of you though the deep slush powdered horrible stuff..i did also let you know regards this and times

good on you though

Read your report on Narnain,sounds painful.That was one of the reasons i didn't carry on to Beinn Tulaichean,
my legs were very tired and i had the steep descent to look forward to.

Well done anyway - I think everyone who's doing Munros at the moment in this deep snow is pretty much a hero - I was knackered up on our moor top - walking in waist-deep snowdrifts aren't becoming to my liking I'm afraid - I seem to like a much easier life than that!

It's amazing how quick hands can get cold and useless! Sometimes even taking your gloves off to take one photo can do it...

Shame you didn't get the views you were hoping for...

Good stuff David, I think the hills can seem a much bigger and more exhausting place in winter

It's amazing how quick hands can get cold and useless! Sometimes even taking your gloves off to take one photo can do it...

Santa brought me a pair of Sealskinz ultra grip gloves as I would take my gloves off and not put them back on in time when taking pics, they are great, can use all the little buttons on my compact with ease, now dont take them off until back to the car.

Do you wear these under something else or are they warm enough for the conditions and wind chill
you had on Tinto.?

Wear them on their own, description below, no wind chill, warm even when -10 with added wind chill factor and tested them in the sink to see how waterproof, no leaks. Can do anything in them, zips, putting on crampons and eating my rolls. Hands do get clamy, so thinking of getting second pair to swap out with when stopped etc.

Sealskinz's most popular glove. It uses SealSkinz patented technology, Merino wool and has grip dots on the palm and fingers. It is close fitting, dexterous, windproof, breathable and 100% waterproof.