The Morrone ascent was one that I have been planning for a good few months now. Originally planned in March but postponed. The first Corbett I have climbed and it will not be the last.

I was told by some more experienced climbers that it is an easier ascent than Clachnaben, so I was in high hopes. The only thing that could've gave me trouble was weather. As I have no experience in winter weather, I was nervous going up there in snow. However, I felt I had postponed it long enough and it was time that I got that experience.

When we woke up, we were surprised to find that the sun was shining. So we quickly set off towards Braemar. On the journey, it felt we would never make it as we narrowly missed a deer that run across the road. But we arrived, parked in the middle of Braemar and set off towards Chapel Brae.

Looking up at the mountain, it felt like we had bitten off more than we can chew

but we headed up positively

The ascent was quite steady all the way up until we reached the 4-5 piles of rocks where the path just disappeared into snow. By this time though, we could see the Radio Mast so we headed straight for it!

Making the summit was a simply incredible feeling. All the effort of planning and the hike itself was finally showing results

my first Corbett could now be checked off the list! After a few photos and some lunch we headed south and started to descend. It's a good job we headed up when we did as the weather quickly changed from sunshine to snow. I guess I'll have to be prepared for that in future!

With a lovely walk beside the river back to the car, a final look up at the mountain with a great sense of satisfaction! Done! Next on the list... Morven Lovely pond before the ascent Beautiful little stream about quarter of the way up 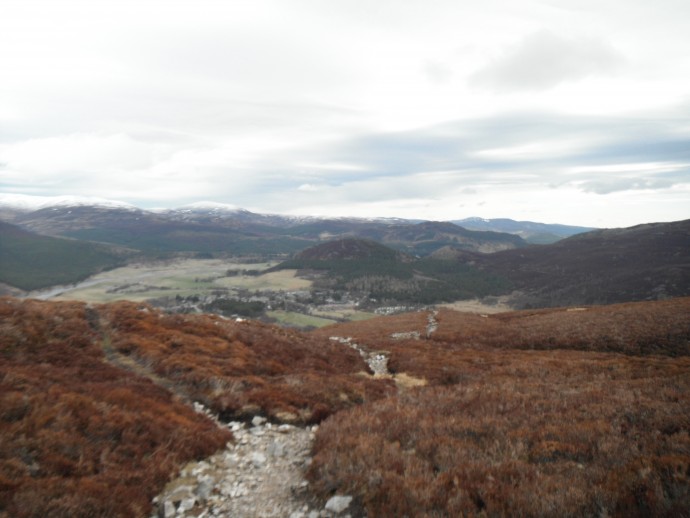 First glimpse of the Radio Mast, getting excited now! Amazing views into the Cairngorms Radio Mast at the Summit The rocks were actually about 6inches tall, didn't actually plan this :) Quickly down to avoid the big cloud! Finally off the dirt track Nice long walk back along the river Well done, been a while coming that one.

Backpacker wrote:Well done, been a while coming that one.

Thanks! Fell in love with the Cairngorms today so I'll be back soon, hopefully won't need to postpone next time!

I am afraid you may well have the bug now... Its a good bug though, they say good bugs are good for you.

You were a bit lucky, I passed Morrone today late afternoon, and the weather had turned very horrible.... You will get used to that, but thankfully this spring is pretty unusual.

Well done, and some great photos of the changing conditions on the way up / down. What's next?

Well done Sean,you look well chuffed at the top there

denfinella wrote:Well done, and some great photos of the changing conditions on the way up / down. What's next?

Thanks! Was hard to see the camera at some points so had to go on a little luck

.. I'm planning a trip to Morven, I was told by some other climbers that it is probably suited for the likes of me?

In between, will be doing some smaller ones like Cairn Mon Earn, Hill of Fare - just ones that are near by

what about yourself? Any trips planned?

Thank you! I was so happy to see the trig point! Meant a lot to get up there. Won't be the last time I see that place

Morven sounds good - I haven't climbed it yet but we always see it from the other hills around Deeside.

Will have to see where the weather takes me next. Corrie Fee, Mayar & Driesh high on the list...

Well done, I was wondering if you went for it or no this weekend. Glad to see you did and you had a good time.

Well done. I know how you felt, it was our first Corbett too. Got to start getting hill-fit again, haven't been out properly since Skye last year

Especially with Braemar at its foot. The promise of a good meal at the end might be the encouragement she'd need