A misty tramp around the high moorland fringes of the Dales.

gragareth.gpx Open full screen  NB: Walkhighlands is not responsible for the accuracy of gpx files in users posts
Winding up the single-track road to Leck Fell House, you’ve climbed most of the way to the top of Gragareth in the car. All that remains is a steep pull up the Three Men cairns (there are actually Six Men now, with a facsimile structure built a hundred yards or so north…) and then a gentle half-mile east over the moor – as with much of this route a surprisingly well-worn path shows the way even through an often-thick fog. Slopes of Gragareth from the starting point View west over the Three Men

The two-mile ridge to Green Hill is tough going, unremittingly boggy and needing plenty of agility and concentration to avoid plunging too deep into the mires. The going is better to the right of the wall, but most of the high walls coming up from the east are unstiled and unscalable so there’s no real escape. Nearby Whernside flitted in and out of view through the unforecast mist, but longer views to enliven this stretch never cleared. 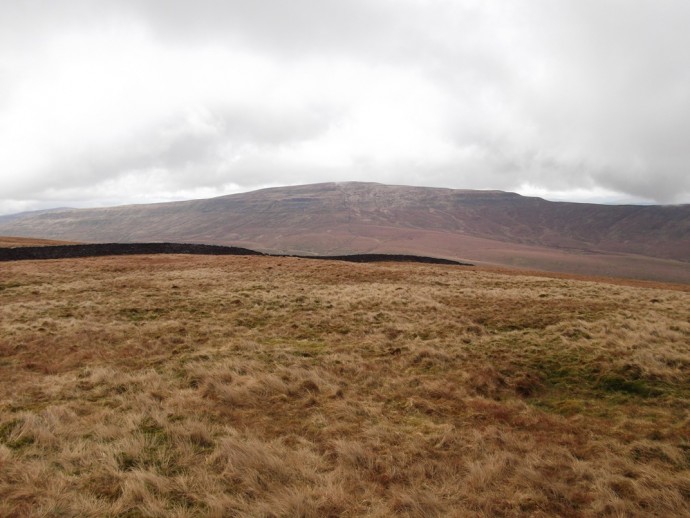 Things pick up after Green Hill (not quite as ironic a name as might be imagined, firm grass does actually break out underfoot near its top – but it’s still a little runt of a county summit for Lancashire, next to its towering Yorkshire neighbour), and the final climb to Great Coum is rather good along a steepening path through little rock outcrops. Back to Green Hill The start of the desent along the south-west ridge is easy going, but the final mile or so cross-country across the flattening grasslands to Ease Gill is again very swampy. This is a worthy target though, the best scenery of the day – the stream sculpting curves into the rock before tumbling underground into an imposing cavern, leaving a stony dry bed to walk along through the steep-sided valley. Back uphill to Leck Fell from there to finish the day, a reminder of how high that starting point had been. All Dales summits seem to be set in pretty bleak terrain, but usually you alleviate that by spending plenty of the day with views of the green dales – not here though. Some highlights, and a satisfying walk to complete, but perhaps not an immediate wish to rush back here again… Glad you had a good day walking. When I did this it was probably a lot drier as I found no particular problem bog wise. Crag Hill is a great viewpoint for Dentdale and the Howgills beyond. I see you have 3 or 4 walks to do to complete your Dales Hewitts ( Howgills could be done on 1 BIG day but best split into 2) then it's onto the great wilderness of the North Pennines. I have 11 to do which I'll have sorted now the summer is approaching.

Hi Col - yes, just three more 'Hewitt days' in the Dales, I think. The 'BIG' Howgills walk looks temptingly possible to me, but Birks/Yockenthwaite and Wild Boar Fell aren't happening unless or until there are a few dry weeks!

Good luck with the North Pennines - they're some way down the list for me, but I'll be interested to read some reports from there to see whether they're really as daunting as imagined...