It was already after 1 pm when I decided to head for the hills on Saturday and keep Sunday free, so I had to aim for something that wasn't going to take too long. I decided on a route that Neil and I had done in January 2012 from Ogwen, taking in Pen yr Ole Wen, the two main Carneddau and Pen yr Helgi Du. I remembered that it had taken us just over 4 hours on that occasion in less than favourable conditions, so figured that if I got a wriggle on I could get round quicker and still get home at a reasonable time.

I arrived at the parking area alongside the A5 just to the east of Llyn Ogwen and left the car at 14.35 taking the track over the river. After a few tress the view opens up with Llyn Ogwen to the left and Pen yr Ole Wen ahead. 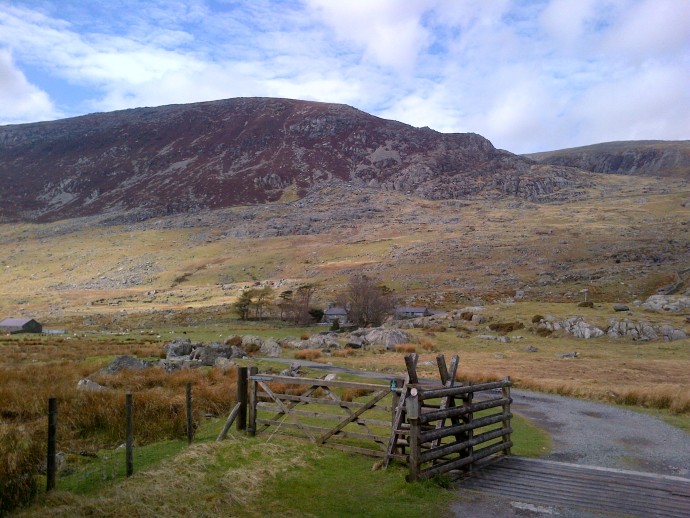 The track is relatively clear, indeed there are a few new marker posts in the ground along the early part. It heads more of less in a north to a wall at about 550m. In 2012 Neil and I had continued north at this point before turning west past the lake and climbed a long, steep scree slope. However, I wanted to get my hands on the rock on this occasion so I headed up the eastern flank of Pen yr Ole Wen, which offered a few opportunities for a bit of scrambling. However, the rocky band is not sustained and a gradual path leads to the summit which is marked by a tiny pile of stones. I was glad of the opportunity to take a break though as I had pushed hard up the last section, although as soon as I stopped I felt the cold and had to put on another layer. The trip to Carnedd Dafydd is fairly short and doesn't entail much in the way of height loss and gain (I doubt both of these would achieve munro status) and I only paused briefly at the summit shelters for a photo (as on Carnedd Llewellyn there are a number of shelters joined together with openings facing different direction so there's usually a good chance to get out of the wind whichever way it is blowing). The journey to Llewellyn is much more interesting (especially in fine weather) there is a decent distance between the peaks, enough re-ascent so you know that they are definitely separate mountains and you cross a broad, but non-the-less impressive ridge en route. As I completed this ridge and the climb to Llewellyn opened up in front of me I could see a figure carrying a large pack high on the slope ahead. I wondered whether would be able to catch this person before they reached the summit and so I put my foot down, ignoring the zig-zag path and went for the straighest line up. I never caught them, but it certainly got me to the top in good time and I took a couple of moments to catch my breath in the shelter (and get out of the weather which had deteriorated). On setting off for Pen yr Helgi Du I saw the walker with the large pack and exchanged greetings as I jogged past. This section is a lovely walk following a narrow ridge, although no real exposure the views are impressive and is finished with a short climb to Pen yr Helgu Du that offers some low level scrambling should you so wish.

The summit is a grassy plateau, but offers views in all directions. After a quick mouthful of cereal bar I set off jogging down the broad southern slope - for about 20 years I've resisted referring to myself as a jogger, but I'm coming round to the fact that I'm not Peter Pan and I am slowing down

I dropped down to the metalled road from the reservoir to the A5 and decended that for a while before heading off west alongside the watercourse. Finally I dropped down through fields to the A5 and back to the car. I arrived back at just after 5.35 with legs that were throbbing and slightly painful feet, but pretty satisfied with completing the round in 3 hours. I suppose it helped that I wasn't distracted this week with any animal rescues like last Sunday http://www.walkhighlands.co.uk/Forum/viewtopic.php?f=16&t=31069
On that point I was surprised not to get any comments on that post - a story about a Welshman involving a sheep - it cries out for something humourous!

Well only a couple of opportunities now to make further headway on the hill fitness before Neil and I head up to Scotland for our big summer week - hoping to get about 30 munros.

Re: Carneddau from Ogwen

Compared to my 7 hours doing this round yesterday (1 hour of rests) you must be a sprinter. I did speed walk off llewelyn til I came to an abrupt halt at the crags near pen yr helgi du. A right sting in the tail!!

Re: Carneddau from Ogwen

that's not right, a man should saunter....enjoy the hills and save his knees for his later years