My objective on Sunday was to ascend the sub 2000 Marilyn Bidein Clann Raonaild and get some nice views of Torridon in the forecast clear air. As I left the house it was a chilly -10oC and I had a good feeling that there would be some great views on this trip.

Little Wyvis (Corbett) from near the Achilty Hotel

As I passed Garve it became more and more white and the views just got better and better.

Although the road was in good condition, it was getting very, very cold as I got nearer Achnasheen!!

Nearly as cold as my freezer! 8O

The hamlet of Achnasheen flew by in a wink as usual but I started to get some good views towards Torridon.

Now for the bad news!

It proved to be impossible to get a parking spot anywhere near the start point for Bidein Clann Raonaild, as either side of the road was covered in ploughed snow and there was no way I was prepared to block the road in order to dig out a space for the car.

However, I decided to make the best use of my time and started on a tour of Torridon to take some pictures – sit back and enjoy as today was really special!

.First hill is visible as you enter Kinlochewe near the Incheril turn off.

Took the next shot just by Kinlochewe’s petrol station.

Robin and Beinn Eighe from Kinlochewe

Given where the sun was, I decided to head off up Loch Maree to get some pics and it was an absolute pleasure to see peak after snowy peak. 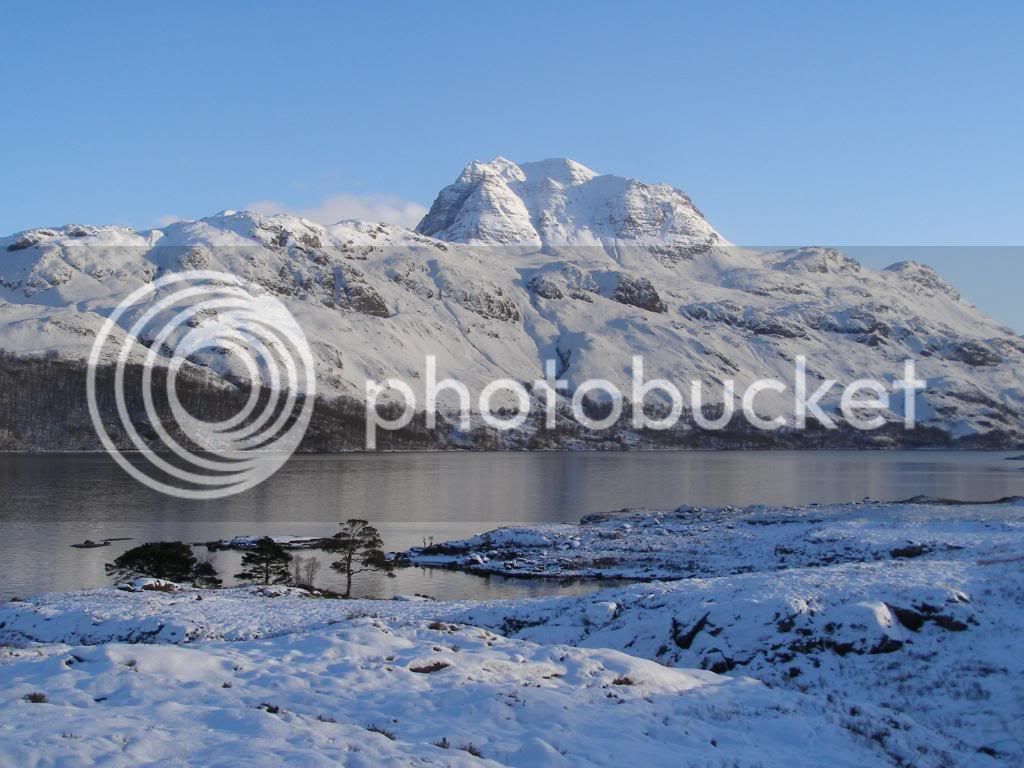 I had wondered about heading up by Slattadale to get a shot of Baosbheinn but reckoned that the light would be wrong, so headed up to the Loch Maree Hotel to get some pictures by the wee piers where I’d taken the boat over to do Beinn Lair & Meall Mheinnidh in July.

Saw a pair of one of my favourite birds by an old pier.

However, it wasn’t only the wildlife that was of interest here as the views across Loch Maree’s islands were fantastic, just follow the link below to see what I saw.

Having really enjoyed Loch Maree, I decided to head for Loch Clair, hoping to get some good shots of Liathach & Beinn Eighe. The temperature even at midday was -9oC but in the sunshine it was actually quite nice as I walked down the icy track (my Kahtoola Microspikes were great on this surface). 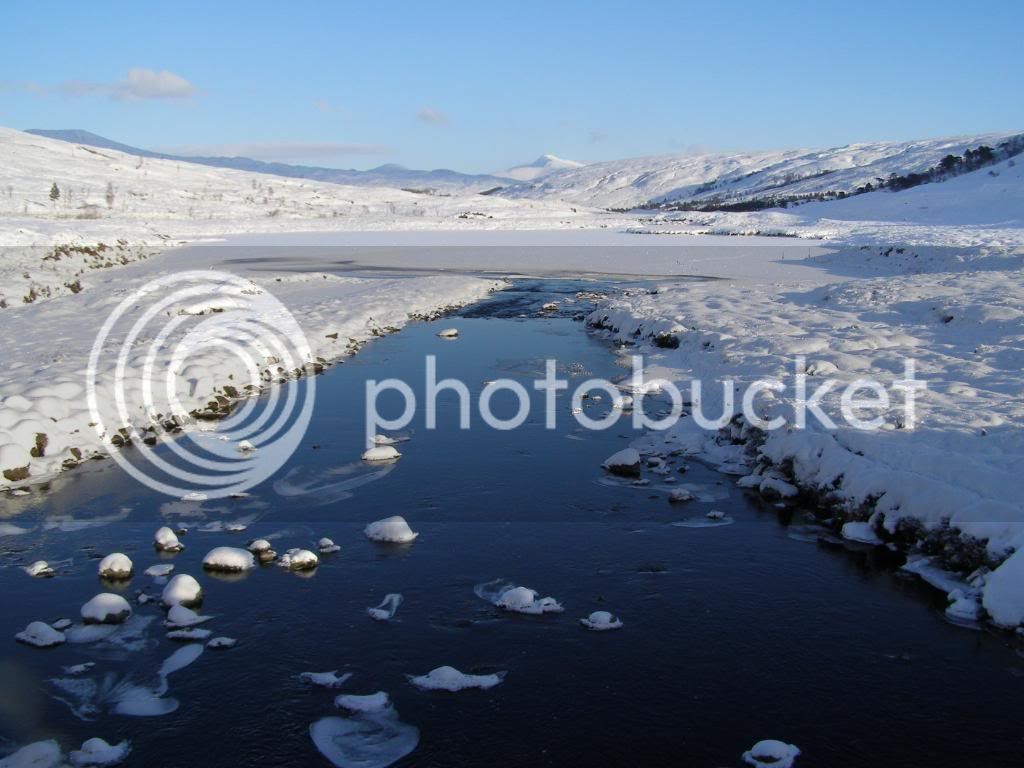 As I walked along the track I could see the sun glinting off the hoar frost and took the following picture which shows just how delicate the frost crystals are.

However, my main target was to take a decent picture of Liathach and I just couldn’t believe how perfect the conditions were – I must have taken about twenty shots! 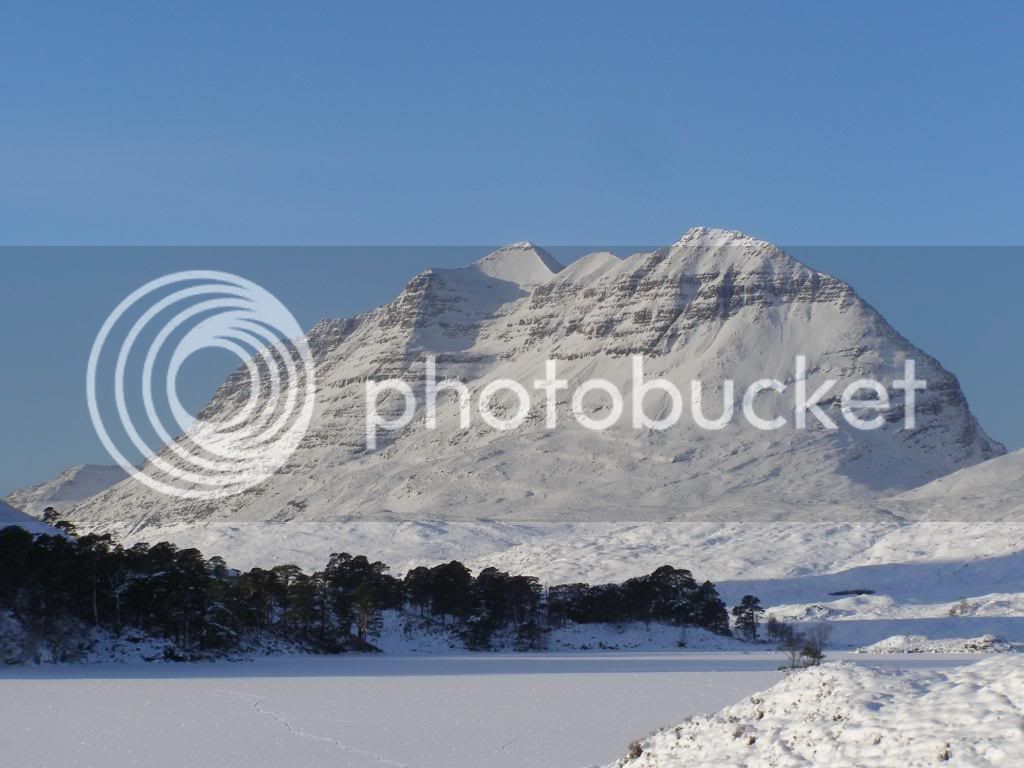 Zoom shot of the eastern Munro.

Of course it isn’t all about Munros round here and the next shot is of a very fine Corbett.

Cuillin with Loch Clair & Liathach behind

Of course Loch Clair also gives a good view of the mighty Beinn Eighe, so here’s a link to a pano shot.

Well all good things come to an end and it was time to head off back home, leaving the blue sky and virtually windless clear air behind.

Looking back to Torridon

As I approached Achnasheen, it was more like entering a zoo as there were deer all over the place.

A couple of stags

A couple of hinds

Just a perfect day all round and even though I didn’t get much of a walk, I wouldn’t have missed any part of the day.

If i was to pick a favourite from that it would be the 1st pic of Slioch
What a stunning looking area,cant wait to get up there
Well done

thanks for sharing those pictures are exellent, really enjoyed looking at them, love the pictures of the stags in the snow, brilliant, i think your views and animals made up for your lack of walking

Those poor deer must be totally fed up by now (but then I guess Scotland normally gets this much snow - we don't normally!)... Certainly wasn't a waste of a day getting such cracking pics was it... I like the Slioch ones best too!

This is my fav report so far this winter Cuillin, even though its more of a tour through Torridon, the pics are excellent and captures the landscape brilliantly!

Nice to see a bit more of Torridon and pics from the same spot I was at on Dec 27 walking round Loch Cuillin and Loch Clair. It's clear to see there's a LOT more snow on your trip! On my way home I got stuck in the Loch Maree viewpoint car park - had the spade out and the car mats under the wheels!

The max width is 640 pixels as you say Kev; the pics in the report are shown scaled to that width though Cuillin has linked to them on a photo hosting site rather than uploaded them to walkhighlands.

Brilliant - my fave climbing and walking area of Scotland and amazing to see it all in such amazing winter finery! Thanks Cuillin!

As I've said before, the view of Slioch across Loch Maree from between the hotel and Bridge of Grudie is just one of the best things ever, but I'd never seen it looking like that before.

Thanks for the comments folks and although I've to Torridon on countless occasions before, I've never seen it so clear and bright with perfect snow conditions.

Glad you enjoyed the pictures.

Thanks for that post, stunning pictures, realy enjoyed that