Four seasons in one hour Me, checking out the conditions on the Cuillins the day before our Bla Bhienn attempt

On the morning of the 29th April 2013, myself and two others set off to attempt the ascent of the Black Cuillin outlier, Bla Bhienn. Whilst we were still in the car park preparing ourselves and our equipment, I wandered over to chat with two local women who were returning from walking their dogs. Skye folk are very friendly and we quickly got into a conversation about the weather. One of the women politely asked where we were intending to walk today, I responded by turning and pointing to Bla Bhienn. “There” I said, thinking that I might impress them by appearing a little nonchalant. “oo are you sure, are you prepared?” they asked. At this point, the weather abruptly changed for the worse, becoming colder and raining heavily, and I started to feel like I didn't have the right kit on. “A man who walked off into the Cuillins has been missing for several days now” the other woman told me. Although outwardly I remained cheerful, I felt a shard of fear pierce me. With their words of warning echoing in my mind I said goodbye, went back to the car, took my pack off and added a layer of clothing, much to the amusement of my team mates who were in the process of doing the same thing.

My team mates are dedicated walkers, who like me relish the challenge of walking in the Scottish mountains. We had walked together on two previous occasions, completing the traverse of the Aonach eagach ridge, overlooking Glen Coe, on a glorious mid September day and Sgurr nan Gillean on a reasonable, if somewhat changeable October day. We had previously been beaten back by bad weather on other Scottish mountains hence, we were fairly experienced in dealing with the prevailing conditions. Just in case they don't want to be named in this article I'll refer to them as JB and Dr Jones. JB is a professional photographer and the pictures which grace this article are his. Dr Jones is some kind of senior lawyer, in short, a lady who is not prone to backing down from a challenge.

We set off in high spirits following the path along the north bank of the Allt na Dunaiche river gradually working our way to the foot of Coire Uaigneich. At this point I had to strip off a layer as the sun had come out and I had begun to sweat profusely. Now, I was wearing only a tee-shirt and a light waterproof on my upper body, a configuration of kit I returned to later during the descent. We climbed up to the corrie and decided to have a rest, tea and cake. These moments are amongst my favourite during a walk because pausing allows me to really take in the scenery. Resting amid the black upwardly thrusting crags of Bla Bhienn was both intimidating and exhilarating at the same time. Dr Jones taking it all in

Rather annoyingly, a group of three chaps breezily joined us (annoying to me as I liked the idea that we were venturing up there on a day most, if not all, wouldn't). Even more annoyingly, it turned out they were preparing to do the entire Cuillin ridge with the intention of starting tomorrow, which made me very jealous. Despite my own feelings, they were friendly chaps and once we had chatted for a while they set off up the scree toward the south ridge. We set off toward the East ridge where the walking soon became tough, interspersed with sections of scrambling with the path appearing and disappearing at random. Once we reached the snowline, the weather became windier and colder, which caused us yet again to stop and don more clothing. We gritted our teeth and ascended the ever steeper and snowier flank, glancing nervously through gaps in the rocks to the airy gully below. Putting in the work

At this point, things got a bit hairy as we were confronted with a particularly steep section covered with about two feet of snow. This situation was new to me and I quickly realised we had no idea what was under it. At the same time, the wind began gusting strongly and it started snowing hard, which clouded both my mind and vision. I felt that things had become dangerous and the words of warning uttered by the Skye women back in the car park came back to haunt me. I suggested to the team that we set up our storm shelter, eat some food and drink hot tea before we decided what to do next. They were quick to agree which lifted my spirits slightly as I realised that I wasn't alone in my fears. The effect of this was amazing. I felt warmth and vigour return to my body, and we quickly reverted to laughing and joking with one another. I hadn't been aware of it at the time but I had become cold and tired. In the safe cocoon of the shelter, I realised the effects of weather in this place are an insidious thing which can creep up on me without warning. Once the weather had calmed down, we packed up and pushed on, making a last effort to get to the top. Mercifully, the terrain became easier and we reached the summit all wearing broad grins. On the summit at last 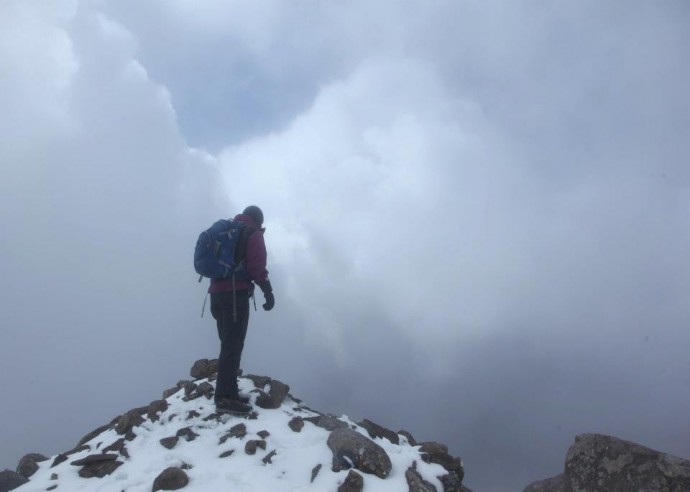 Dr Jones on the edge

Over the years, I have walked in other mountain ranges including the Lake District and the Alps however, I retain the opinion that for mountain walkers Scotland is amongst the best. Every time I go, it's tough and uncompromising, and it is this which sharpens the feeling of reward once I manage to get to a summit. Like the film 'Ice Cold in Alex', it makes me feel like a thirsty man who has crossed the desert before stumbling into a bar, ordering an ice cold pint of lager and downing it in one to quench his terrible thirst. Long live Scotland! It's a great walk up Bla Bheinn, did it last year. I like the picture of the walkers coming up the slope, I've never really stopped to think about shooting such a picture with a wide aperture to throw out the background like that, makes for a more dramatic picture I think. One to remember for next time I'm out on the hills with the camera!

Blah Bheinn is currently my favourite walk yet, however my experience of Scotland is limited compared to many of the posters on this forum. I'm particularly looking forward to Liathach, An Teallach, all of the other Black Cuillins and the Five Sisters of Kintail. Any recommmendations?

A very enjoyable read of a mountain i have still to climb. Those shelters are one of the best pieces of kit you can carry, they can be life savers at times. Cheers

Thanks Johnny
I'm really pleased you enjoyed my post.
This is the first time I've written something about walking in Scotland. I wrote it because I love it so much and I wanted to express that passion to other like minded folk.
See you in the Hills.
Best wishes
Smoking Pope

Nice report smoking pope!, love the picture of Dr Jones, wonderful! great Bla Bheinn in what can only be called changeable weather conditions, bet you enjoyed your pint after that one.

Guess you will be back very soon to explore more classic mountains, enjoy!