With a fairly bleak MWIS forecast in Scotland coinciding with a bank holiday weekend, it was finally time for our first venture to Wales. Last New Year’s Eve we had created a wish list of peaks and places to visit in 2013 as we counted down the clock: the chance to sample some Snowdonian scrambling was near the top.
Armed with my copy of ‘Scrambles in Snowdonia’, the plan for Saturday was the Tryfan and Glyders horseshoe with as much scrambling as possible. Back in Scotland our last few trips outdoors had been on big open spaces in the Monadhliath and neighbouring Cairngorms so we were looking forward to a route that was a little more hands on for a change. I think the beauty of an approach up the north side of Tryfan is that there are so many options available in terms of what line to pick up. We took our time enjoying the improving views as the cars shrank beneath us. Unsurprisingly the mountain was really busy and at times this slowed down progress but I enjoyed the chance to pause and take in my surroundings. The decision to travel south and escape the clag and rain was already paying off. Scrambling, rather than walking, up a mountain makes for a hugely entertaining approach but it can also be fairly energy sapping (or maybe I’m just getting more unfit) As the summit appeared I was relieved to have a break and watch a variety of characters gaining the freedom of Tryfan by leaping from Adam to Eve and back. One fellow was particularly keen and did a couple of press-ups between the rocks. I imagine he probably sleeps on a bed of nails too and wrestles prickly things before breakfast of a morning. 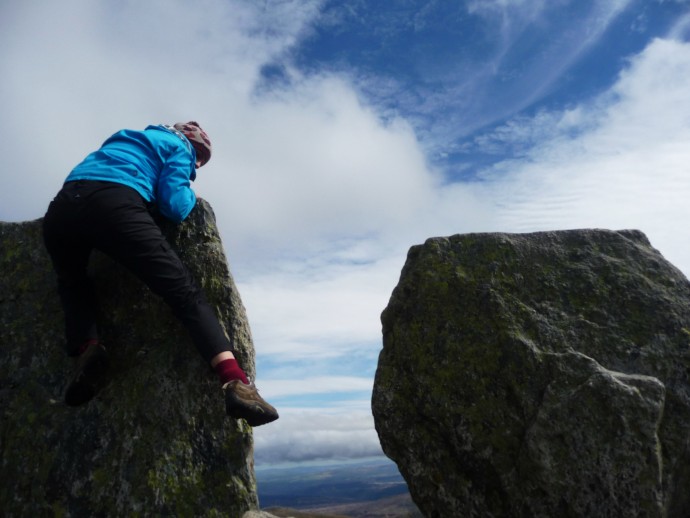 From a distance it all looks very straightforward but up close the monoliths look much more imposing and with a gusting wind to contend with I opted out and looked ahead to our next challenge: Bristly Ridge.
The clouds had been lying at a fairly low level when we began the walk but by now they had lifted and we enjoyed fine views in all directions, although we could see that the Snowdon horseshoe seemed to have a weather system of its own, remaining shrouded in cloud all day. In Scotland there is a name for this phenomenon: Skye!
The descent from Tryfan was steeper than I had anticipated but route finding on the boulders was fine and we were down at the wall eyeing up our ascent route of Glyder Fach in no time. 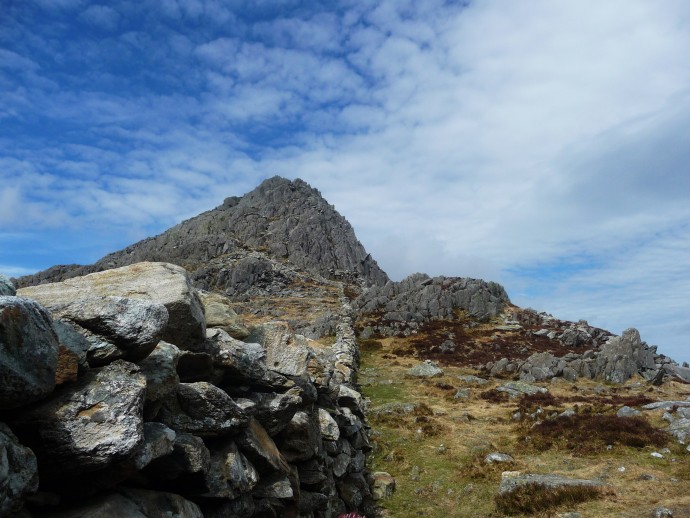 Despite thinking I had done my homework in advance of our trip I must confess to making a blooper here. I had focused my attention on Tryfan and hadn’t really considered Bristly Ridge at all. Actually, I thought that the “ridge” referred to the Castell y Gwynt section…Must do better! Anyway with blissful ignorance we chose to ascend by what I understand to be Sinister Gully. We could see a pair taking on the wider gully to the right and felt that the approach to the left offered less exposure. I really enjoyed the route upwards inside a chimney that involved an awkward move to pop out onto a wide ledge and the chance to enjoy ever-more impressive views back. The move out of the gully was probably more technical than anything we had done coming up Tryfan. The complexity of the route to the summit over assorted pinnacles made for a highly rewarding and fairly unexpected bonus for us with Great Pinnacle Gap offering a particularly awesome aspect. Leonide is a born scrambler and she led the way with ease as usual, with me clambering clumsily behind. With hindsight, the decision to bring my winter boots with me for the trip wasn’t the best. The rock is highly polished at times and I would have much preferred to be wearing something more grippy. That’s my excuse for lagging behind anyway.
The summit of Glyder Fach was considerably less busy than Tryfan’s and eventually we had this tremendously weird landscape to ourselves. I can only imagine the strangeness of this place on a misty day. Up ahead more and more bizarre rocky structures appeared. We half expected a wizard to stride past enigmatically, or maybe to interrupt a band dressed in black making a music video and miming something appropriately moody...Having left the crowds behind it was odd to move through the spiny rock formations of the Castle of the Winds alone. The name Castle of the Winds has a beautiful lyrical quality, but structurally, it felt more like journeying through a giant’s toast rack. 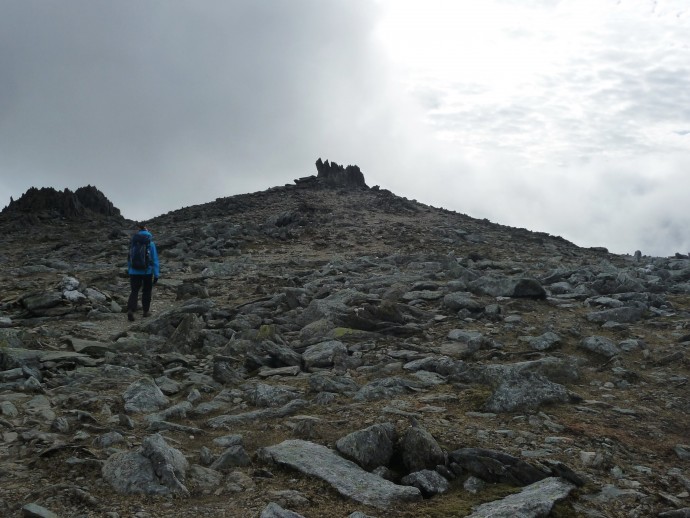 Now on the top of Glyder Fawr our descent route started to become clearer. Because of our late start and wearying limbs we chose not to journey on to Y Garn. Instead we opted to descend down into the path that eventually runs beside the beautiful Llyn Idwal and back to the start. We paused often to enjoy the views back at the ridge we had walked, enjoying the solitude and peace of this area so close to the bustle of Tryfan and the A5. Overall it was a great day out with a perfect mix of challenging scrambling and diverse views in an area that was completely new for us. We spent the night camping at Gwern Gof Isaf farm at the foot of Tryfan, where we were able to relax and watch the sun change the colour of the sky above Y Garn to the west. The next day was an abortive attempt of the Snowdon Horseshoe, 70mph gusts of wind and wet rock turning Crib Goch into glass and no place for me and my winter boots. We turned back at the beginning of the ridge and made do with an approach (trudge) up the Pyg track in zero visibility. Perhaps we had had our share of weather luck the previous day. However a pint in the fantastic Vaynol Arms, with a roaring fire beside us,more than compensated. After all, Crib Goch isn’t going anywhere and we will be back.

One of my favourite routes, this. I like the way you park by the A5 and immediately start scrambling. No messing about with walk-ins (not that I don't enjoy those too). Then when you've done Tryfan, you have the Bristly Ridge ahead.

It's a great route in a great area; one that I'm sure you will enjoy. As for becoming a climber: not for me, the scenery doesn't change quickly enough!

Phil the Hill wrote:One of my favourite routes, this. I like the way you park by the A5 and immediately start scrambling. No messing about with walk-ins (not that I don't enjoy those too). Then when you've done Tryfan, you have the Bristly Ridge ahead.

Definitely a no messing route, was interesting to see the area for ourselves once we finished Bristly Ridge and the crowds on Tryfan disappeared. Sad not to manage Crib Goch the next day but that just gives a reason to return so all good.

Glad you had a good first experience down there. After Scotland, it can be quite surprising how there can be so much in such a small area. I think I've been up Tryfan over 20 times now, and I still struggle to recognise a particular route on the North ridge, at least until higher up when it narrows down a bit.

Going to Wales in the morning...and hope to do both routes, if I figure this site out I shall report!..

Great report, really enjoyed it. Some fantastic pics too, look's bloody steep in a few of those early ones....you need a few 'switchbacks' on that route

Love the description of the guy doing the press ups