A ridge too many - failure on Foinaven

A ridge too many - failure on Foinaven

our_route.gpx Open full screen  NB: Walkhighlands is not responsible for the accuracy of gpx files in users posts
After a wonderful introduction to the NW Highlands on Ben Stack (see http://www.walkhighlands.co.uk/Forum/viewtopic.php?f=9&t=31360), a glance at the MWIS outlook on Saturday evening gave us a clear message that high level walking wouldn't all be plain sailing over the next five days. Monday and Tuesday promised sustained winds of 50-65mph, gusting 85mph, and Wednesday had heavy rain entering the equation. Thursday was our departure day, so that only left Sunday as a viable option for Foinaven - with a forecast of gales and rain moderating to 30mph before strengthening slightly in the afternoon with heavy showers. Still borderline maybe, but worth a try?

After parking just off the A383 near Gualin House, scaring away a few grit-munching sheep in the process, we set off amidst a heavy rain shower on the excellent track into Strath Dionard. Deer gazed at us through the gloom, well-camouflaged amongst the vegetation until they moved! Rather disconcerting to start a hill walk by descending steeply, but it gave an great view up the strath - the sheer size of the valley allowed us to observe the passage of passing showers and glimpses of brightness in between. The plan was to follow the river all the way to just before the outflow from Loch Dionard, before ascending the steep, north-facing tongue of An t-Sail Mhor to the plateau. We'd then follow the rim of Coire na Lurgainn around to the main Foinaven ridge, then traverse the entire ridge before heading off the NW end back to the car.

The near (NW) end of Foinaven, Ceann Garbh, was shrouded in cloud to a low level this morning, with a slightly unexpected dusting of fresh snow poking out from below the whiteness. But further up-valley there were (to use an MWIS phrase) breaks to the higher summits, so we were hopeful of avoiding a day in the mist. In fact, after the first heavy shower the sky brightened up considerably, weak sunshine glinting off the track and river. All of a sudden the day looked a lot more promising, with blue sky appearing left, right and centre. Rounding the craggy outcrop of Cnoc Duail, the prow of A' Cheir Ghorm hove majestically into view - the very end of an awesome scree-clad ridge sticking out from one of Foinaven's secondary summits. Please, please could the weather hold? End of A' Cheir Ghorm

It was a long walk into the middle of valley, but soon An t-Sail Mhor was visible ahead, with our planned route of ascent up the shoulder in the right of the picture. The rocks of Creag Urbhard formed a barrier to the northeast, glistening in the sun. The gradient of the forthcoming ascent looked less fierce as we neared it and the angle of sight changed. However the rocky band at the very top of the shoulder still looked tricky and we were eyeing up possible ascent lines as we went. Finally leaving the track just before Loch Dionard, we crossed initially boggy ground to gain the side of Creag Urbhard, with amazing views over to Cranstackie on the other side of the valley, which seemed to be getting the best of the weather. 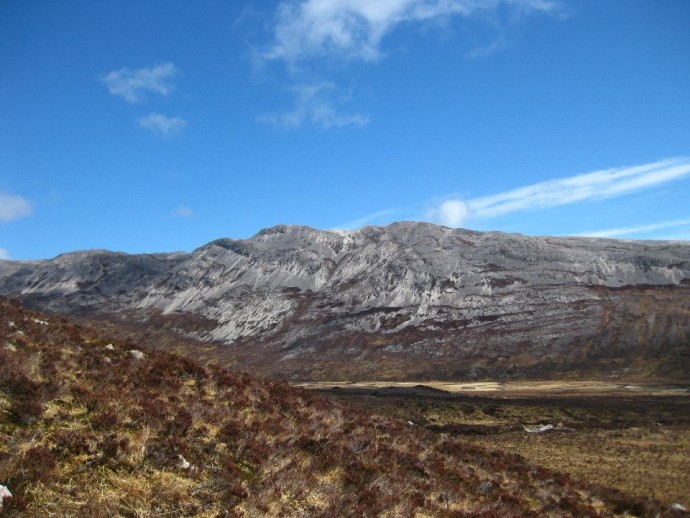 We should have gone here instead!

A' Cheir Ghorm could be seen side-on here, with its seemingly impregnable scree runs. Finally, the cloud which had previously beein stalling over Foinaven lifted, and the sun decided to briefly put the main ridge in the spotlight. Grass gave way to rocky outcrops, before the final rocky band was reached. Initially this was fairly straightforward, with thankfully grippy and dry rocks aiding the ascent. Nothing too technical, but the top was only gained by traversing left for a distance to get round the final band of cliffs - complicated by a short but heavy hail and snow shower! Apparently this has been suggested as a route of descent in some guide books - but I'd have thought this would be very difficult as you can't see the layout of the rocks and terrain from above.

Finally we reached the plateau. The hail eased off but the wind hit us - surely more than 30mph and gusty. We had a quick lunch stop and considered our options - we were OK for time but the weather had deteriorated a little and the wind would be coming sideways at us for the whole ridge ahead (and was forecast to strengthen). It didn't look particularly easy either, even from a distance! A windy ridge - a step too far?

Sadly then, we decided to abort and head down the gentler slopes to the south, back to the head of Strath Dionard. This meant we had to worry about neither the ridge nor returning down the steep ascent route, now pretty wet too. Before we left the plateau, a few snaps of the lands to the north were taken: Ben Hope looked particularly attractive from this angle, with its narrow valleys giving it a mottled appearance. Descending the slopes of Plat Reidh we walked headlong into a particularly intense, and prolonged, hail shower. At least we weren't facing that on the ridge instead! By the Allt Horn a good track was joined which we followed east into upper Strath Dionard, with moody, almost Snowdonia-like views of An Dubh-loch and its waterfalls, a snowy Meall Horn and a further, hidden loch in between. Are we in Wales?

Once the valley broadens a mile or so beyond the loch, the track abruptly stops. You come over a small crest and are greeted with a small turning area, and then nothing

strange seeing the track's come so far, all the way from Achfary up Allt Horn, over the bealach and down into Strath Dionard - stopping only a few km away from the track coming up the strath from the other end! Annoyingly the next hour or so made for pretty awkward walking - shrubby vegetation, undulating hillocks and random sections of bog and peat to negotiate. The going improves slightly (and later dramatically) as Loch Dionard is reached, with fine views of a cascade over Creag Urbhard - the water seemingly not falling downwards but rather at an angle! Which way is up?

Leaving the loch and a rather phallic islet behind, we finally reached the track which leads all the way back to Gualin House and the main road. It's pretty demoralising to see a milestone stating that it's still six miles away (my other half remained blissfully unaware) - but the going is easy and we covered the distance in 1 3/4 hours. A few deer watched us from a safe distance, probably wondering why we essentially did a 12 mile return walk up a track with a silly little tiring loop at the far end. About halfway back along the track, another prolonged shower arrived, this time of rain. Getting back to the car wet was looking increasingly likely, and really annoying when we'd spent most of the day dry. Miraculously though, on the final pull back to the car park the clouds parted and the sun reappeared, drying us out in the nick of time. Dry end to the day

And to the summary - objectives for the day largely failed, but at least we got to take a few pictures of the ridge so we can pretend we've been there

and we got to know Strath Dionard, having walked about 15 miles in it...

OK OK, I know you were just waiting for the phallic islet photgraph... I name this place... Pen island

Next day... the Kyle of Durness (http://www.walkhighlands.co.uk/Forum/viewtopic.php?f=9&t=31448), which made the wind today seem like a gentle breeze by comparison

Re: A ridge too many - failure on Foinaven

Great shame the weather Gods were not kind to you, but as you said on your earlier report, the hills are there for another day. You did the right thing aborting being on a ridge in strong wind is not fun, infact being on any hill with gusting wind can be frightning. What a difference between your first and fourth photograph! Well done starting out in those conditions

Re: A ridge too many - failure on Foinaven

Thanks for a great report. I can't see your attempt as being a failure more like a gruelling & succesful hike. Not at all like my epic fail last year when everything was in my favour. I set off from Lone in great conditions & made it on to the ridge when my legs gave out & thought it wise to turn back..Cheers