We set of for Tinto on New Year’s Day, somewhere close enough and a hill with no cliff tops.
Arrived at 10am and the small car park was nearly full (Space for a dozen cars, then everyone parks on the approach road).
Geared up and set of up the path following the fence line, through the kissing gate and then into nice deep soft snow. There was a slight wind so even though there was walkers already up the hill; you had to look hard for the track. It was easy enough to plough through the snow, drifting to a couple of feet in places. 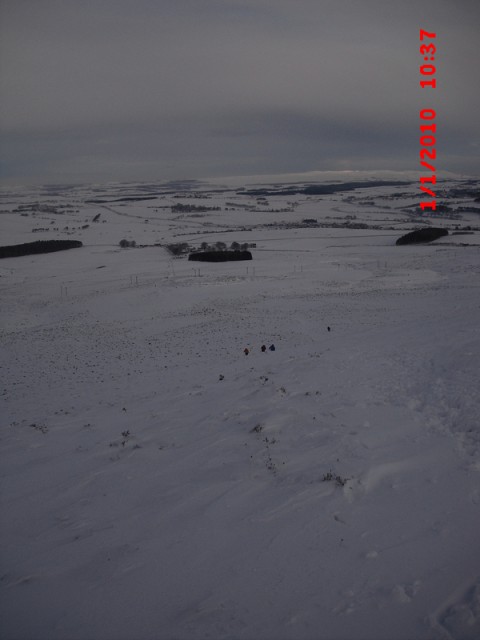 The path up, honest its there Dollar law and others

A third of the way up, we see the first walkers coming down. As the approached us, walking poles were swung under their arms, and they took of their right gloves, 3 of them in a row then happily shook our hands as they passed wishing us a Happy New year, I couldn’t stop smiling after that, this weird sight of people shaking hands as they passed.
After about 10 people I stopped taking my glove off, yes happy New Year but it is minus 10 for goodness sake.
We made it to the top after 1 hour 40 minutes; the snow on the way up was constantly drifting to well above your new making the last 500 meters very slow going (plus shaking hands all the time) Fence to the top As we summated the wind changed, just to make sure you were awake; we took some pictures on the cairn then made a wee snow shelter to get out of the wind for our lunch. What a view, and we were both over the moon we had decided to come out on New Year’s Day. View from the top, looking towards England and Isle of Man The way up, The small forest 2nd from right is where the car park is, the black dots in the snow are walkers We sat enjoying our soup, coffee and rolls when an elderly gent stumbled off the cairn. We had seen him take the wrong turn on the ascent (however I thought he was going a different walk at the time), He was dressed as Tom Weir did in Weirs way, Thin waterproof trousers, jacket, woolly hat and gloves. We could see he was having problems and shared our coffee and soup with him to try and get some heat back into him, long story but we were eventually happy he was ok on his way back down and followed at a distance.
A few pictures at the trig point just to the side of the Cairn then we retreated from the wind back the way we came, more happy new year handshakes and a few on your arse or frontal snow angels and we were back down to the lower slopes, only to be passed by a few skiers coming down, lucky gits.
It was a great day out, made all the better by the snow. 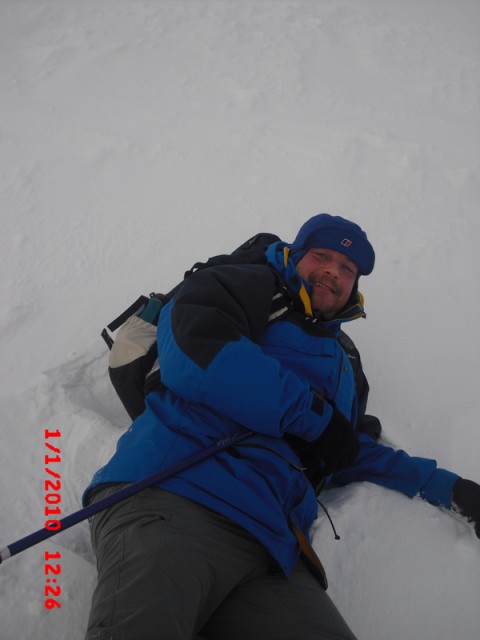 These are brilliant! I've seen a couple of Tinto reports on here before, but none with particuarly good photos.

some good shots there Al .....except the red date

.....can you not turn that off and improve your pics 10 fold

Original Paisley myself although moved a few miles south of paisley in the last 20 years...Barrhead

looks a good hours walk ....maybe have a look soon

Dont know what happened with the date, wasnt on the day before, can only presume the new year reset it to default, was slightly annoyed by it myself

Photo shop the dates out by cropping then re enter your photos...some good shots

Excellent report - I reckon Tinto from the north is great for early winter skills practice.

doogz wrote:Photo shop the dates out by cropping then re enter your photos...some good shots

The pic quality doesnt deserve the work, just a wee compact camera, if any were wall worthy I would probably have done it.