A relatively short report (for me!

) this - Ben Vane is a popular enough hill to have garnered plenty of better reports from other users however was still enjoyable enough for me to want to share some pictures and words.

Despite being many tentative hillwalkers' first ports of call, perhaps owing to their proximity to Glasgow, I had yet to sample the delights offered by the so called Arrochar Alps. As much as this rocky group have always enticed, I'd spent my first few munros in my "home" territory of the Mounth and, apart from a few ventures further west, the area immediately surrounding loch Lomond's bonny bonny banks was all still a bit of a mystery to me. In terms of character, I knew that these hills would have a lot to offer and in stark contrast to the long but gradual ascents of my Perthshire/Angus homeland - these looked short and steep, with views to match. After many months since we scaled the Big Bookil back in November, my mate Phil was keen to get back out on the hills with me and wanted a simple, single munro we could do in a short half day, getting back to Edinburgh by mid afternoon. With the weather gods smiling most fondly upon the west, Ben Lomond would have been an obvious choice but I've relegated that to the list of munro's on which my better half might accompany me. That left Ben's Vane and Vorlich, and not much to choose between them - we eventually opted for the former as it appeared to be the shorter walk.

We set off at our usual 6am from Edinburgh. Contrary to the scurrilous rumours, I'm not an anti social walker but living in a city means that any time I do get in the hills is best enjoyed when there aren't scores of fellow walkers making the same ascent. Any of the Arrochar Alps on a sunny Saturday morning were bound to be a prime target for hill-thirsty walkers but if possible, I'd much rather be sociable on the descent so we always aim to start as early as we can. This policy paid dividends as we pulled into the empty car park at Inveruglas at a little before 08:00, admiring the views across the loch in the early morning sun.

Her fans will be pleased to note that, following an enforced absence from my last outing on Ben Challum, Maggie the mental Jack Russell was back at my side and raring to go.

Despite her having "helped" with lambing up in Lewis two weeks previous, I still didn't completely trust her not to want to play excitedly with any of the woolly arrivals on the approach to Ben Vane, so I kept her responsibly leaded until the main, sheepless slopes were reached. We were the first walkers to plod up the well-made tarmac road - the power station and associated developments don't do much for the walk-in but the views soon improve as they are left behind and in front, the rocky outcrop of A'Chrois protrudes above the thick forestry, the bulky Ben Vorlich dominates all views to the north, and Ben Vane finally reveals itself, though mischievously hiding its true summit to all approaches from this side. There isn’t a great deal to be said about the climb itself - it is fairly steep but not relentlessly so. The first pull up to the broad and boggy ridge was the worst part for me - everything thereafter was a gradual and relatively enjoyable slog, particularly the optional sections of scramble higher up on the rocks. It is on this ascent that I began to understand the key difference between sweeping statements of winter safety with regards equipment and snow, and how everything is relative to the hill itself. Though there was far less snow and ice here than I'd encountered atop Ben Challum a few weeks back, what few patches there were felt all the more risky owing to the steep and rocky nature of the hill itself. While there was nothing of any difficulty, I don't think I could have managed any more snow or ice than was present without the appropriate skills - much food for thought. The views over lochs Lomond, Katrine, and of the surrounding hills and mountains became more rewarding with height gained and, after having cursed more deviously false summits than I have yet to experience in the hills (mark my words - Ben Vane is a cheeky b*****d of hill when it comes to falsies

), we finally topped out on the spectacular viewpoint of the large summit. Having set off remarkably early and encountered no other walkers other than those who were now on our tail, I was extremely surprised to find another young walker standing on the summit cairn! It soon transpired that he had set off even earlier - at 6am - and had taken in Ben's Narnain and Ime before reaching his current location - I was now feeling rather less pleased with our efforts for the day in comparison! Given the early hour (it was now 10:00), he contemplated going on to grab Ben Vorlich while he was here – something I’d considered myself before realising that there was no real ridge or high point between the two which might ease the descent & reascent...looking at the distances involved I was happy to decide that just the one would be fine for today! We lingered for a short while, enjoying the superb views across to the other ‘Alps and north to Ben Lui and chums, before making a hasty descent in the face of an ominous, but short lived, snow flurry. The pockets of snow and ice covering the path needed a little more care in descent than they had coming up but we made good time once past the initial, rockier sections, passing many more walkers who were now joining the climb in the opposite direction. I did my best to let down gently those who thought that they had almost reached the summit... A fantastic little mountain, with lots of character and rewarding views. I'm now very much looking forward to claiming the remaining Alps! 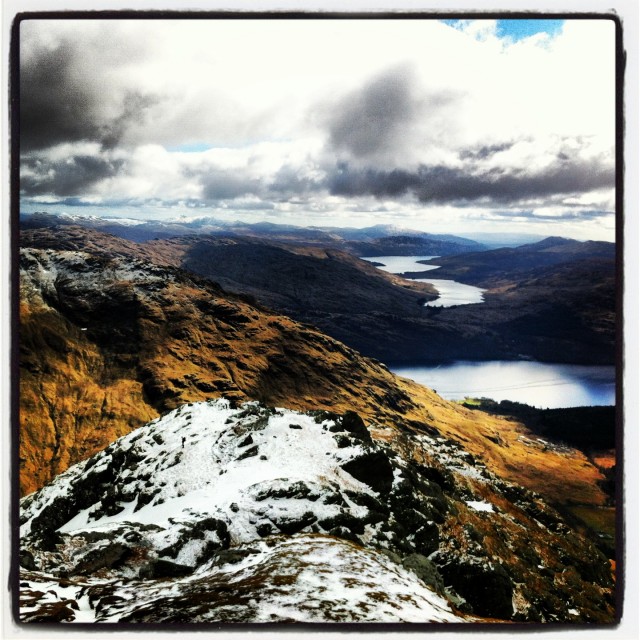 Haha I remember being quite perplexed at the Hopeful Tree. Great photos!

Smashing report and fantastic pics, lovely colours going on there. Your pic of Loch Sloy reminded me of a day some years ago, first time I'd climbed a hill in some years. We climbed straight up from the loch to Dubh then over to Ben Vane. nearly killed myself lol but was a great April day out for us too.. Spend some more time round Arrochar,,great set of hills. Enjoy

Nice report, I thoroughly enjoyed walking the Arrochar Alps this time last year. Great hills but you're right Vane is a steep wee beastie and all those false summit get old very quickly!

Pehaps my favourite "Alp" and you capture it superbly