A high level traverse and a tent wrecking storm!

A high level traverse and a tent wrecking storm!


A high level traverse – Three Munro’s and Corbett in the Glenuig Forest….

A long weekend was planned with us both taking the Monday off work. A number of plans had been made with route choice number one being the Fisherfield six, however as the weather was not perfect we resorted to plan B – a Munro and Corbett bagging expedition to the Achnashellach and Glenuig Forest.
We decided on this adding a wild camp to enable us to bag all these hills in one outing. Of course when this was decided the weather was glorious!! The truth on the hill was slightly different…..

The original plan was to head up the 10km to Glenuiag Lodge and head to the Bealach at Drochaid Mhulich where we would leave the bags, summit Maoile Lunndaidh, head back, get the bags and see how far over the other two Munro’s we could get. We would then wild camp, head to the Bealach Bhearnais and once again lighten the bags. We would then head out over Tharsuinn to Lurg Mhor and back to bags with the final Corbett of Sgurr na Feartaig being bagged on the way home. It all seemed so easy when we discussed it - The best laid schemes o' mice an' men Gang aft a-gley…..etc etc!!

So we left the Central belt full of optimism and although the weather was not perfect (rain forecast but no wind until later in the second day) we were hopefull of achieving our route. We parked up at 15.20 at the Achnashellach Forest car par park and literally as soon as we opened the car door – the rain started. This was not forecast until tomorrow!!! It was to rain for the next 21 hours!!!

heading off in the rain

Although wet, there was little in the way of wind, so we set off towards Glenuaig Lodge, up the range rover track (we saw the range rover twice!). It was about 9km to the Lodge which we did in roughly just over two hours. We then looked for a route up to the Drochaird Mhuilich.

It was raining hard now and time was marching on. There was a stalkers path marked on the map but we failed to find it and this led to the first change of plan! – We decided to head up Maoile Lunndaidh’s north shoulder and directly to the summit with our heavy packs on. I must admit the weight of the pack was giving my shoulder and back a little bit of pain!! We reached the summit in heavy rain around 20.00. It was bloomin cold and I was getting a little concerned about finding a good spot to camp before sunset (21.12 hrs). Descending the west flank we found a nice mossy/grassy spot at around 750m only a short distance from where we thought we may have camped at the Bealach. Although still raining , there was still no wind which was a good sign, so we set up camp on the shoulder and were glad to be in the tent just before dark!! After some hot food, which raised the moral, we settled down knowing tomorrow would be a long day if we were to bag the remaining four Munro’s and two Corbett’s.

What we did not expect was a long night – however that’s exactly what we got – one long cold, wet and extremely windy night. Not long after finishing our food we noticed the wind starting to pick up. By around midnight I was outside trying to fix the pegs which had been ripped out and also fix the guy lines. This was not good – for the next five hours we were both kept awake but the strength of the wind. It was so strong that the tent was literally on top of us at points with the sides regularly caving in on us!! My thoughts were continually towards escaping to the Glenuaig shelter (basically a shed with beds(see video!) – however I knew a descent in the pitch black storm would not be wise so we stuck fast hoping that the tent would not be ripped from underneath us!!

Finally morning arrived - and with it lighter winds. The tent was still upright although looking rather sorry for itself !! On closer inspection, two of the three poles had snapped (luckily the cord had kept them semi upright!! Additionally the top cover had been ripped off at some point during the night – explaining why my sleeping bag seemed to be getting wetter and wetter during the night!! I have never been so glad to see the morning in- that was one wild, cold and sleepless night and also an experience I’d rather not repeat!!
I must admit that during the night my plans had changed – to retreat off the hill ASAP and go home !!! However the morning brought more settled conditions and a large coffee and some hot food raised my mood and we set off to complete the ridge to the west. Lurg Mhor and its neighbours would have to wait for another day!!!

The winds had dropped but there were still a few showers blowing through and the cloud base was around 850m. The pull up to Sgurr a’ Chaorachain was punishing with the heavy packs (made heavier now by a soaked three man tent (really wanted to dump this as it was now ruined – but luckily my conscience stopped me!!) and lack of sleep. We had struck camp around 08.30 and we standing on the misty summit by 10.00. We quickly headed off to Munro number three and less than an hour later were stood on top of Sgurr Choinnich. The drop and re-ascent here was not too bad.

The skies were now starting to clear and the tops were showing themselves. This made the final pull up to the Corbett of Sgurr na Feartaig slightly more enjoyable 

view back to Munros from Corbett

The views were great looking back over the ridge we had crossed. We the followed the stalkers path down to the interesting bridge near Archach!! 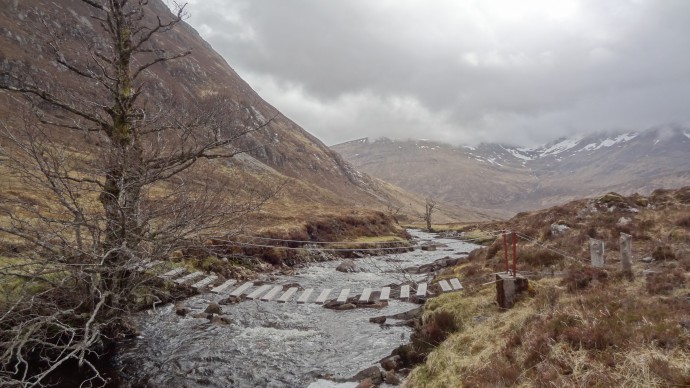 From here it was an easy descent to the car and we got back about 14.30……..
Our plans for two further days in the mountains were gone as we were shattered by our lack of sleep and the exertion from the walk. We decided to head home and get back to our own beds. This was indeed an adventure I’ll not forget soon!!!!!

What did you use for the 3D mapping in your video?

That was a wild night up there, glad the tent stayed with ye, would have being hell walking off there in the dark and wind.

Thanks for posting and great video.

Tomsie wrote:That was a wild night up there, glad the tent stayed with ye, would have being hell walking off there in the dark and wind.

I agree - glad we did not hav to make that decision!

Great read and I totally empathise with your situation.
The nights are very long in those conditions.

It will make those pleasant, warm evenings all the more enjoyable when you're next out.

Quality from start to finish would expect nothing else from you,thanks once again.

kevsbald wrote:Great read and I totally empathise with your situation.
The nights are very long in those conditions.

It will make those pleasant, warm evenings all the more enjoyable when you're next out.

Thanks Kevsbald - all I need now is a new tent (any suggestions anyone?)

Oh - and some good weather

gammy leg walker wrote:Quality from start to finish would expect nothing else from you,thanks once again.

Thanks Gammy much appreciated

Heading to Achnashellach tomorrow for the Braes o Fife burns Supper at invercroft and thinking of doing Sgurr na Feartaig on Sunday, weather permitting. Loved this video, and now I've seen the bridge that has only been described by others I think I'll be OK crossing it

Inspiring stuff and learning material, too. Thanks for going to trouble of video, photo's and report.

heatheronthehills wrote:Heading to Achnashellach tomorrow for the Braes o Fife burns Supper at invercroft and thinking of doing Sgurr na Feartaig on Sunday, weather permitting. Loved this video, and now I've seen the bridge that has only been described by others I think I'll be OK crossing it

Hope you got on ok at weekend - weather looked a bit wild on Sunday!