its been quite a while sinse i done one of these, its also been quite a while sinse i had been out on the hills due to the relentless offshore check ins (the oil has been in the ground for billions of years, why the mad rush i say).
anyway, i had holidays booked last week and myself and a few freinds planned on doing cairn toul, angels peak and breariach after a stay over night at the corrour bothy, long story short, epic fail, relentless weather and too much whisky forced us to turn back after bagging zero munros.
the thursday came and i made the decison that on the friday i would get a mimimum of 1 munro under my belt, even tho i could technically be sent offshore at anytime, i took the gamble and headed for linn of dee car park and was there by 09:30, a usually late start by my standards but with the days being long i could afford the extra 2 hours in bed. i set off from linn of dee at 0940 and within 20minutes i was looking for a place to stash the mountain bike at the foot of creag bad an t-seabhaig, i found a suitable spot and noted it was hidden amongst heather and under a dead tree, very specific in patch of woodlands in the cairngorms.....

i power marched up creag bad an t-seabhaig and the views were stunning, the sun was out and the MOD were playing war games above me, bliss i thought. i had quickly became aware that i wasnt the 25year old whipper snapper i once was and that i was now a panting sweating shambles of a 26 year old, those days sleeping in the tv lounge offshore had cought up with me and this was becoming a struggle. i made my way to carn crom which was a steady gentle-ish walk up a very prominent path, once up on carn crom i had stunning views of derry cairngorm, ben macdui and carn a mhaim. i headed onwards to derry cairngorm rarely stopping to drink from the water i took from the glen derry burn which was making me even more thirsty with every gulp i took!!!

within 2 hours i was on top of derry cairngorm, the forecast wind didnt suffice and only a passing hail shower dampened otherwise perfect weather. i didnt hang around too long and made my way back over the boulders to wards creagen a chroire etchachan which i would bypass round and down towards loch etchachan. on my way down i saw the only soul i would see the whole day, sitting about 500metres from me staring down into the frozen loch. down at the loch, i had a brief lunch of turbo pasta and snickers, a recipe which changes in accordance with what ever i can plunder from my mothers house (i found some green beans in my pocket today in pc world). i then made the calf killing slug up the lung busting SW corner of stob choire etchachan, i was cursing at the this point and arguing with myself that i would become too weak to continue and be at the mercy of the birds of prey and haggis, the thought of being another animals lunch spurred me on to get up and over and onto the barns of beinn mheadhoin, i was absolutely gassed at this point. the walk was now steady and gentle, thank buddha for that.....then the phone rings , please be PPI jerks trying to convince me im due millions, but it wasnt, it was work ''tony, can you come into the office'' ''in a word, no''. i explained i was now a man of the wild and to stick his job as i was a free spirit no longer shackled by the rat race of the western world,well i was going to say that, he took little notice and informed me i was to go offshore on sunday, i can live with that i suppose. haha. but in reality, when my work do phone when im off the first thing they ask is ''are you up a mountain''. the walk was gentle and i reached the giant torrs of beinn mheadhoin, again, stunning views all to myself. i had a little more turbo pasta and built myself up for the slog back to the bike and onwards to the car park. i continued back the way i came to loch etchachan and down the choire towards the hutchison memorial bothy, which i will add is a very nice clean bothy, and then marched down glen derry. when reaching the woodlands of glen derry, i went as the crow flies across the boggy heather, carefull not to step into haggis nests and hopefully end up right where my bike was.....not happening. after 20minutes of looking for ''a dead tree and some heather'', i found my bike and cycled back to the car park, a truly epic day and one that took the bitterness out of my failed munro attempts only days earlier. any love lost for the hills has been dramatically reinstalled in me, even if i did foreget my hip flask. sigh. towards the granite torrs of mheadhoin fine place to dine i say loch etchachan. still in the grips of winter 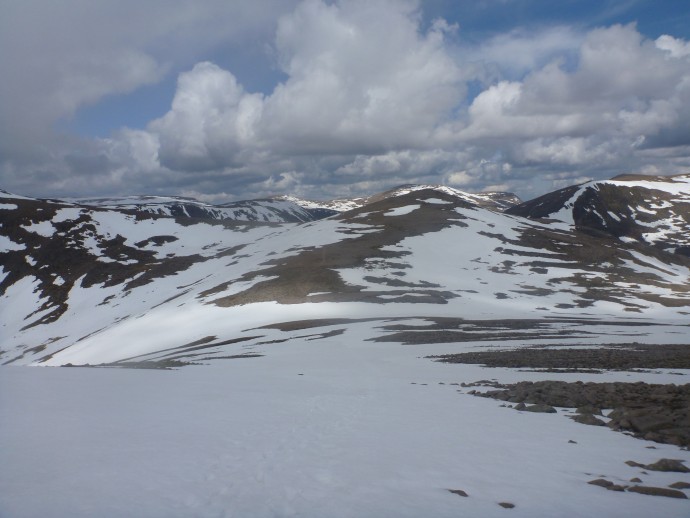 disabled and locked up. not going anywhere fast with this

Great report - I'm guessing you write just the way you speak and I could 'hear' your voice.

Terrible you getting peched at the ripe old age of twenty-nine. Not much hope for the rest of us old folks. Glad you found the bike

Great report and nice pictures done these two last saturday but from the ski car park. A long day,10hrs but the worst was the long haul back up Alt Coire Raibeirt from Loch Avon on tired legs, but the weather, good company and scenery made up for that.