With my thighs fully recovered

and deciding that for now, I'm better solo walking to save holding folk up

( as grass seems to grow faster than I walk), I headed through from Linlithgow to Invervar and parked up at the wee area beside the phone-box.
Booted and suited by 8.30 but found that the entry to the WH described path was blocked due to security railing around the "old smithy"

so had a slight detour around the back and over the fence to get to where I needed to be.
The path up through the woods and out alongside the Invervar burn was pretty soft underfoot, but there are marker posts to show directions to Carn Gorm. Crossed over the wee bridge and followed the fence line of the planted forest to you reach the corner and the open moorland and then upwards over pretty boggy conditions to the plateau of Creag Ghlas. 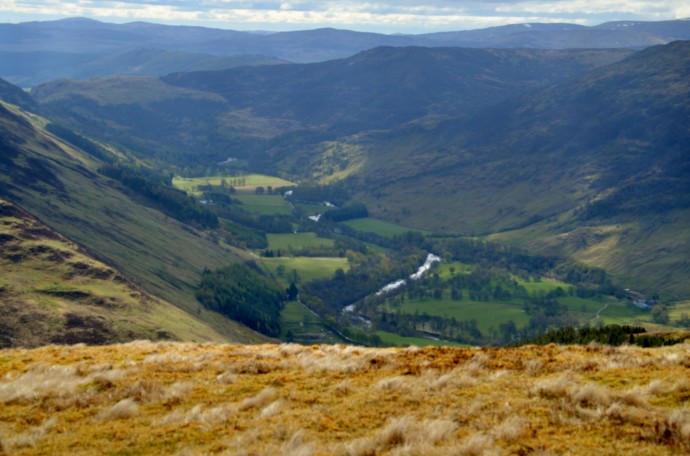 From here it's a steady climb up to the crest and over to the cairn of Carn Gorm. When I set away from the car park, there was still a lot of clag on the peaks but by the time I reached the first summit, was happy that it had all cleared for some more pickys of surrounding views. 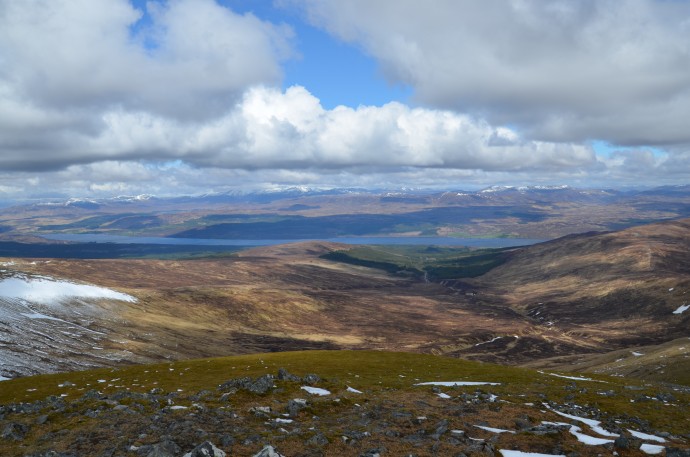 Headed off again, following the path down into the beallach and skirted the side of An Sgorr the along the fence post line up and over the boulder field towards the cairn at Meall Garbh. . Wasn't too bad, but after half the day in relative decent weather, my face was getting a kinda freezing grit-blast

so I was happy to "honker down" and wait for the worst to pass...
Shoogled off again once the snow had abated, but I could see there was more coming so was happy to reach the cairn at Carn Mairg for some more scran and shelter.....was hoping to fire off reams of pickys of Schiehallion but with the snow and the clag all you're getting is one of me at the cairn... Me at Carn Mairg Cairn

Ok, I said I was solo, but actually I had Billy Joel, Crowded House, The Commitments & Fleetwood Mac for company on each of the hills respectively

Of the whole day, I found the descent from Carn Mairg over the boulder field the hardest and was glad to get back onto the soft under-footing of Gleann Pollaidh before the short climb up to Meall na' Aighean. so by the time I reached the car-park, it was, along with my bugle, the colour of the adjacent phone box

much to Mrs. Sparks amusement when I eventually got home

All in all, another fine day out, but this will be the last for a couple of months as I'm away back to work....

Thanks for that...was a slog in the boggy stuff, but worth it for the views

Nice to see the photos, Mark. I missed most of the views when I did these 4 the previous week. It's a good round.

simon-b wrote:Nice to see the photos, Mark. I missed most of the views when I did these 4 the previous week. It's a good round.

I rattled off a few photos of Loch Rannoch and towards Glen Coe but the setting on the camera was wrong, so they didn't do the actual view justice

These hills are on my list for tackling soon. Won't be tackling them as a one'r though, too old for multiple Munro's.
Enjoyed your photos and report well laid out and a good read.
Best regards, Second Chance.

Second chance wrote:These hills are on my list for tackling soon. Won't be tackling them as a one'r though, too old for multiple Munro's.
Enjoyed your photos and report well laid out and a good read.
Best regards, Second Chance.

Ta for that SC....canny say that I'm the fittest of walkers myself

......but I get there eventually......happy at times dawdling along, taking photos so my wife can see what it's like

cracking wee read this, love the pics and the views you got

Some nice pictures there, Mark. Thanks for sharing.