Friday 17th May was one of those days where there was a difference in emphasis between the MWIS and BBC weather forecasts -maybe it would be largely clear but with showers or maybe it would just be sunny but deteriorating later. My reading of those runes was that there would be enough of a good start to the day to make a trip to Cul Mor worth while. I had also missed out on a couple of similarly forecasted north west mornings because of footballing injuries acquired the night before each plus this would be my third attempt in all to get to Cul Mor's summit.

On Thursday the 16th I sat at home watching Nottingham Forrest vs FC Hamburg 1980 European Cup final on ESPN classic and at 11.10pm announced to my long suffering wife that I had finally decided to go hillwalking and would be back next day at around 1pm. I drove as far as Loch Droma south of Ullapool and then slept for an hour. I then drove on to my starting point, arriving at 4.30am, having first made the mistake of stopping and starting walking from a track half a kilometre to the south.

There was plenty of light for the start and I could see a lot of snow on An Teallach to the south and on Ben Mor Assynt to the north. This made me recall how I had been fried in the heat on An Teallach a year earlier.

I followed the path all the way to the top of Meallan Diomhain at 609m rather than contouring because I was undecided as to whether I should go clockwise or anticlockwise. I partly thought of going to Creag na Calmian first for the early morning light but having played football the previous evening my body voted for the slightly less convoluted approach of visiting the main summit first. Previous visits comprised a summer 2005 visit with my wife to a clouded north east ridge and a February 2007 wintry dash for the bealach between Creag na Calmain and Cul Mor, the latter curtailed by my wife getting too cold for comfort.

No weather problems yesterday though and I felt full of energy on arriving at the summit. I'd point out that keeping to the west side of that north east ridge means the summit boulder field is easy going. Maybe it's like that all over though. 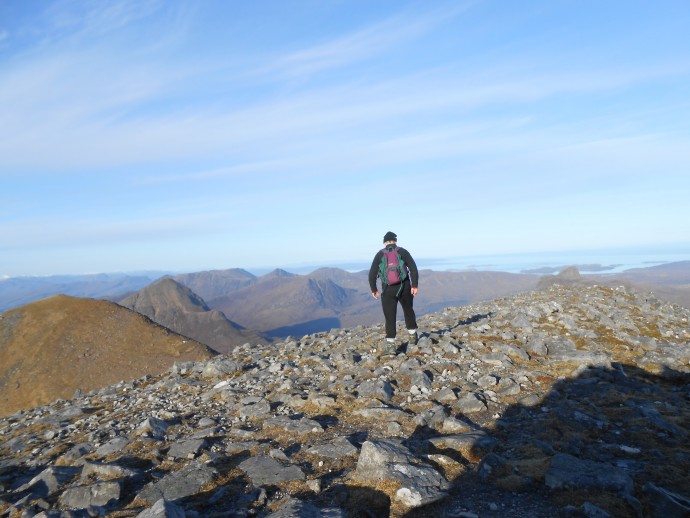 looking south from the summit with Creag na Calmain and Cul Beag middle left, me in the middle and Stac Pollaidh mid right 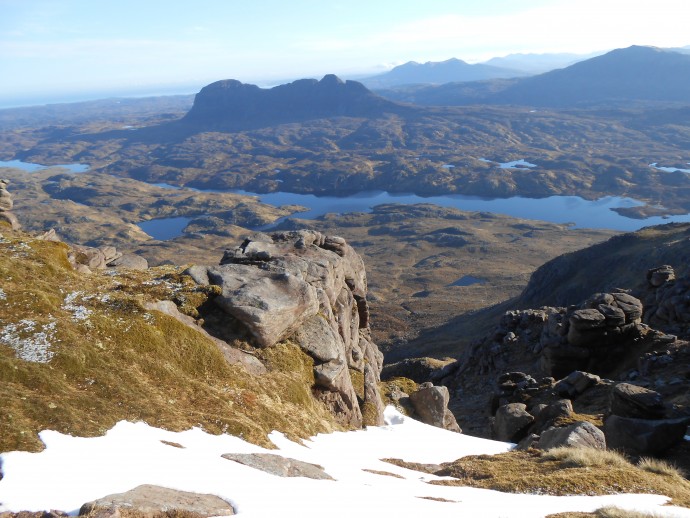 view north from summit to Suilven

There are a couple of impressive gullies and some mini pinnacles just west of the summit and I had a good look around this area before deciding on heading to Creag na Calmain next rather than wandering round the plateau to the west. This was partly because I wanted to photograph the former and partly and relatedly because the weather looked like it might turn as predicted. Not to mention the ETA I'd given m wife.

The short drop of a walk down to the bealach is a very pleasant grassy stroll that brings you to a stunning vista of loch and mountain viewed from the hill's southern flank. I then visited the small promontory that projects south from the bealach before making the visit to Creag na Calmain along its short but exciting north ridge.

My return route was a descent following the north bank of the Allt Lochan Dearg a Chuill Mhoir followed by contouring back to Meallan Diomhain. Got home at 2.30pm, having been slowed by sleeping en route and by there being lots of deer on the road in the morning. Creag na Calmain and the promontory extending south from the bealach 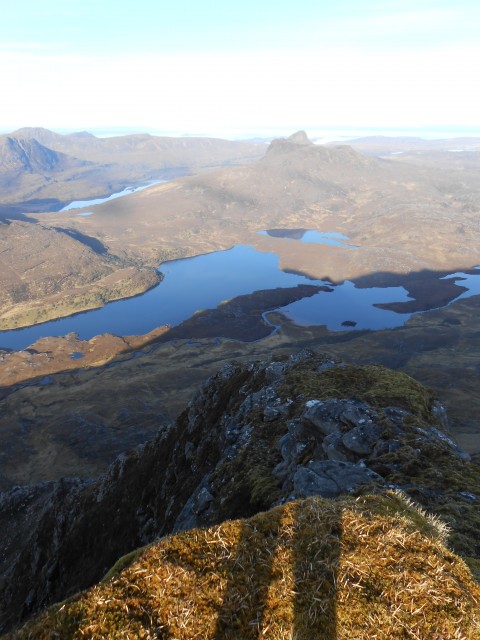 view to Stac Pollaidh from promontory off bealach Love the video. Planning on doing Cul Mor the week after next. Keeping fingers crossed for the weather!

Your video was one that came up when I was deciding where to go and I got the idea stuck in my head for a while though I had made those two aborted attempts previously -gave me enough of a glimpse to inspire a return. Just had a look at your trip report -I see you got some nice photos too.

Avocetboy wrote:Love the video. Planning on doing Cul Mor the week after next. Keeping fingers crossed for the weather!

Fantastic Photo's.
It just goes to show that on a good day it pays to get an early start.