I went Upper Hill, past Dan's Witches and on to Mount Doom

I went Upper Hill, past Dan's Witches and on to Mount Doom

Okay so it's a silly title for the report. But there are three lumps I crossed on the way up Pikethaw Hill - Upper Hill, Dan's Hags, and Frodo's Heights (sorry, Frodaw Heights), that seemed to suggest something other than just a list of hills climbed.

Anyway, I started out in the cold and wind from a handy car park and walked along the track through Linhope farm (the people I saw there didn't seem bothered that I was doing that - there is a house further down the track itself, so it has to be open to through traffic). Once past all the fields full of lambs I headed straight up Dod Hill, the wind getting stronger all the way, but blowing me up the hill which was nice for a change. I was soon at the top and going round the lovely horseshoe of hills topped by Ellson Fell - along with Dod Hill there's Bye Hill, and Carlin Tooth named, but several other little bumps to traverse. There's another Carlin Tooth just over the border in England - Wikipedia informs me a Carlin is possibly from Carl meaning a commoner, but also possibly Carlin meaning Old Woman, or perhaps a Witch. So maybe my title isn't so far off... Ellson Hill horseshoe from the descent of Wisp Hill

The wind was really strong at the moment and showers were threatening and it was cold so I didn't hang around at the top. The little stretch between the top of Ellson Fell and the 494m top to the SW is the most tussocky area of the whole walk and has one or two quite big holes you could disappear into. I decided here to try to take in the little lump of Crude Hill which meant cutting across Glen Reif. I hadn't really looked too closely at the map so hadn't noticed just how steep a slope that meant going down - after a wee stroll I suddenly found myself on something at least as steep as I'd descended and ascended by Inverlochlarig a few weeks ago. I'd recommend descending by the Castlewink spur as at least all the contours have room to be shown on that route. Glen Reif has a spelling oddity - the glen is Glen Reif, the stream is Glenrief Burn. I before E except after C unless you fancy randomly spelling it another way.

Crude Hill is a good viewpoint though and worth taking in. You look straight down the length of Ewes Water towards Langholm. I also had another strange sight. A landrover appeared and tried to drive straight up the hill, failed, and started rolling back, tried again, rolled back again, and then tried to turn to go down the hill while rolling back and then tilted up on two wheels, very nearly rolling over. It didn't, thankfully, and sheepishly descended the right way round never to be seen again. I descended, forwards and on two feet, to the road, crossed the A7, and went straight up Upper Hill, on the left side of the fence, the right side being full of lambies. Then it's a tussocky, heathery slog across the moors along the top of the steep scarps over the A7. Across Dan's Hags, Frodaw Height, to the pink rock cairn on the top of Pikethaw Hill. The weather by now had become lovely and warm and I had a wee doze in the sun. The views go across to the Lake District and the whole of the Eskdalemuir forest to Criffel, the Lowthers, and the high Moffat Hills. I'd considered making a longer route over Rashiegrain Height and Causeway Grain Head before going over Haggis Side to Wisp Hill, but for time reasons and because Merrypath Rig has been planted with new forestry, I descended the northern spur to Ewes Doors before going up the fence to Wisp Hill. There's meant to be a few archaeological features at Ewes Doors - I stood on what it described as a mound, but it didn't look at all archaeologically interesting and I also couldn't spot the other earthworks mentioned on the 1:25000 map. But it's clearly a pass with an old track through it (a drove road? - they've left a gap in the new woods that seems to follow where the path might go) and old fields on the west side of the wonderfully named Wrangway Burn. It's only really on the way up Wisp Hill that you get a decent view of Pikethaw Hill with it's summit in it, the plateau is often hidden behind the scarps. The hills that caught my eye all the way round this walk were Arkleton Hill off to the south and Skelfhill Pen to the north east. Neither have balloons of their own, but they have certainly moved up my 'hills worth climbing' list - there would be several interesting approaches along lots of tops I haven't had to climb to turn the local balloons blue. And any excuse to get back to these fine hills is a good one. Pikethaw Hill from the way up Wisp Hill 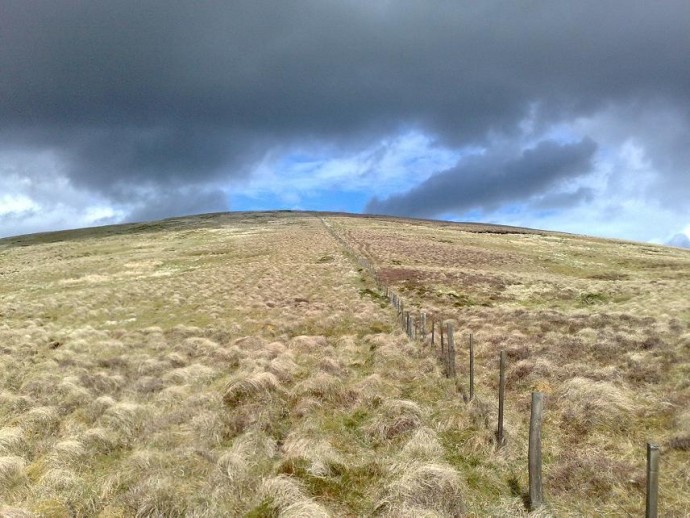 Clouds and sun over Wisp Hill

I waited at the top of Wisp Hill to let a hail shower pass to the north before going down the NNE spur and had to skirt some growing gullies cut into the hillside - they extend much further up the hill than the map suggests, and over the mast-scarred Comb Hill (but I can't complain at the good mobile phone reception). Finally, down by the stream, Comb Sike, to the A7 and back to the car. The weather had become t-shirt and sun cream weather by now. Three hills, three different seasons, and a new excuse for another walk or two. Hail disappearing over Tudhope Hill with a hint of a rainbow

Re: I went Upper Hill, past Dan's Witches and on to Mount Do

A fine looking circuit to take in the three

Re: I went Upper Hill, past Dan's Witches and on to Mount Do

It was. It was more climb over less distance than last week's Munro and Corbett combination in Glen Lyon (and I added an extra, unnecessary loop onto that walk too) and genuinely more interesting. No views over Rannoch Moor from here, but even Eskdalemuir Forest from above is a wonderful sight.