our_route.gpx Open full screen  NB: Walkhighlands is not responsible for the accuracy of gpx files in users posts
Ah, a quiet day in the hills. Broken only by the plaintive plovers, the squelch of the bog, the blast of the icy wind, and the noise of 200 scramble trial bikes.

I'd been chased round the Borders hills by scramble bike tracks, but this time I managed to encounter the real thing - the Scottish Six Day Trial no less, apparently the world famous trial bike equivalent of the Isle of Man TT.

When I drove up the wee road towards Loch an Daimh, I did wonder what all the other cars were parked for. When I set off on the walk, I also wondered what the two blokes in jeans with brollies were doing in Munro territory. When they asked me if I knew where the next stage was I started to wonder properly. And when I was passed by 4 scramblers hurtling down the track I worked it out.

If I'd decided to go straight up Meall Buidhe I'd not have encountered them, but their route down to Loch an Daimh from Rannoch Moor was the reverse of my way up so I got some privileged spectator views. I have to say I quite enjoyed seeing them racing across this landscape. Yes, they left a big track behind them, but certainly no worse than a shepherd's 4*4 track can be and not in the most sensitive of areas. It looked good fun. 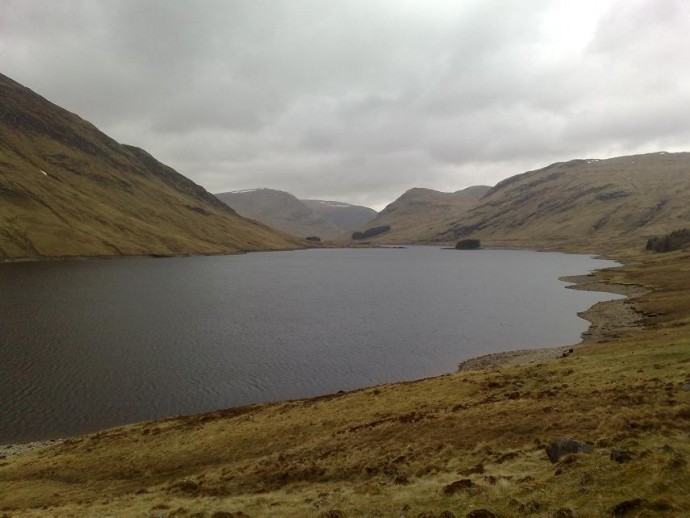 West along Loch an Daimh from near the dam Hurtling down the mud to Loch an Daimh

I walked along the track on the north side of Loch an Daimh to its end and cut across to the prominent unnamed peak at 730 odd metres. If your time was short, this would make a good destination - it has views all round, but especially fine across to Sron a' Choire Chnapanich, Stuchd an Lochan, and the whole length of the loch. It's the south-east spur of Meall Cruinn. There was some strange sinky bits along this ridge - they looked like solid, gravelly bits, but they weren't, they were spongy and gooey. Not deep, just disconcerting. I crossed back over the scramble route to get to the top where I very suddenly got very cold - so several layers were added before continuing over the bog back towards Meall Buidhe. 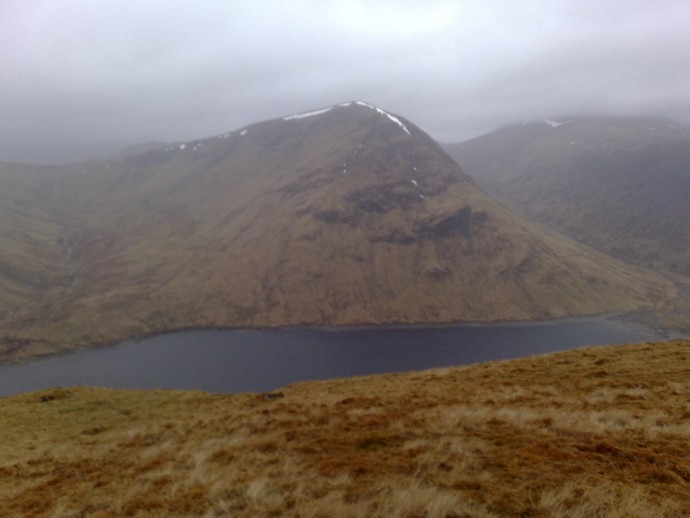 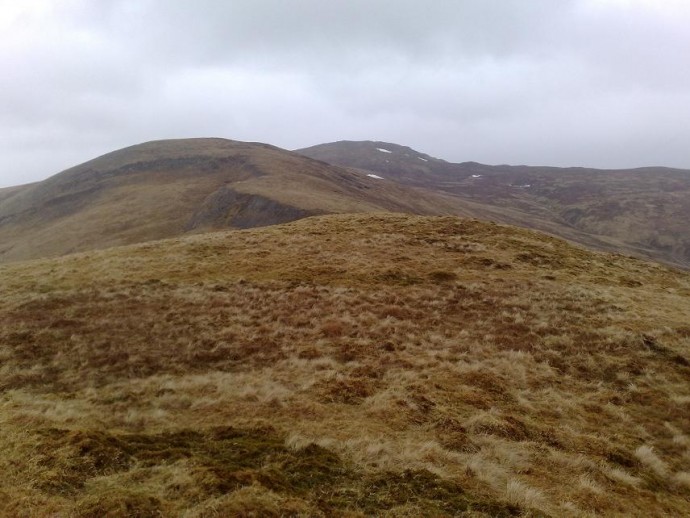 The ridge towards Meall Cruinn 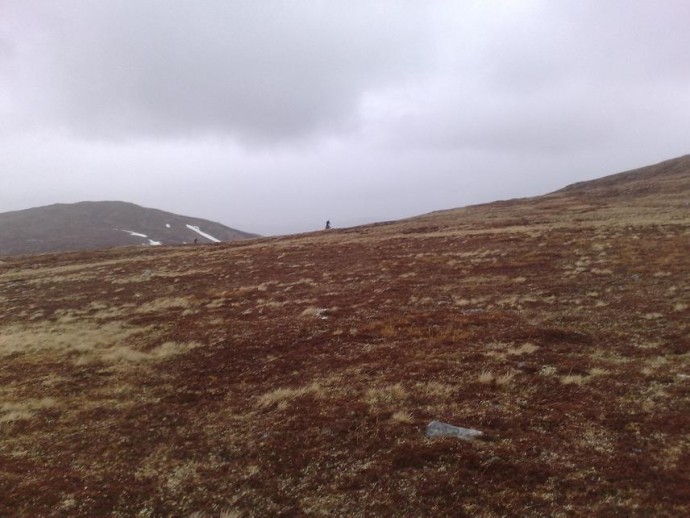 Trial bikes near the summit of Meall Cruinn 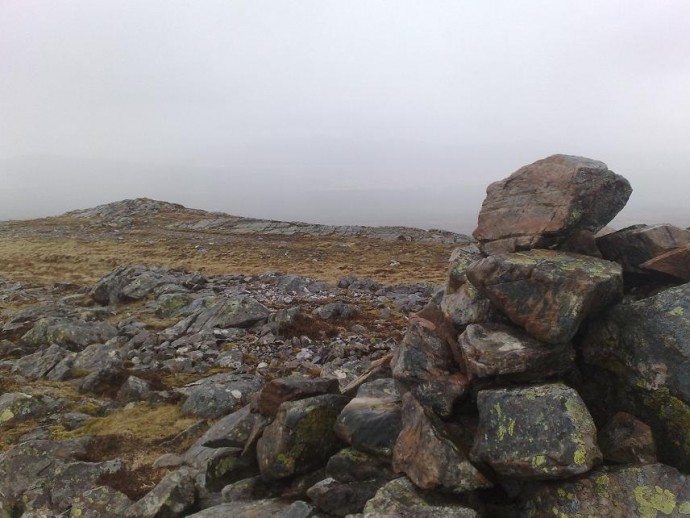 The claggy top of Meall Cruinn

On this walk I passed several cairns, some marked on the 1:25000 map, and some not. Some that were marked weren't there. On the whole I'd recommend navigating by something else as they were unreliable to mark your position throughout the whole length of it. The other thing that was strange about this walk was the generally gentle nature of the slopes. To climb a Munro and a Corbett without any particular steepness (there was more going up the unnamed peak above the loch than anywhere else) seemed odd, but wasn't unwelcome. The following week's walk going over three Sub 2000s between Hawick and Langholm had more climb than this walk in less distance. 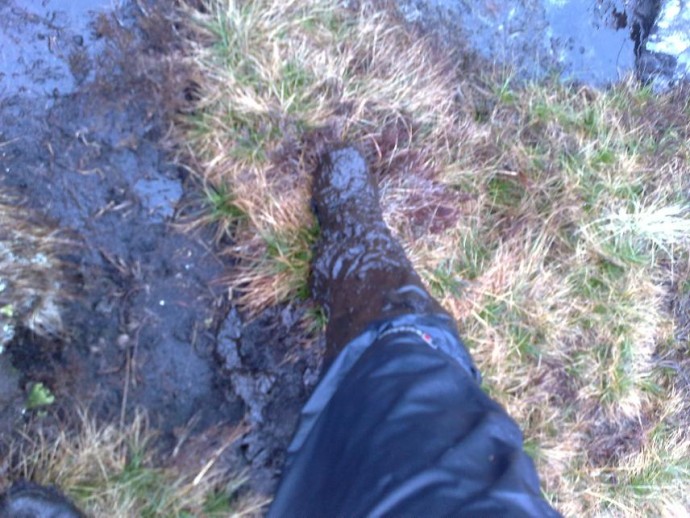 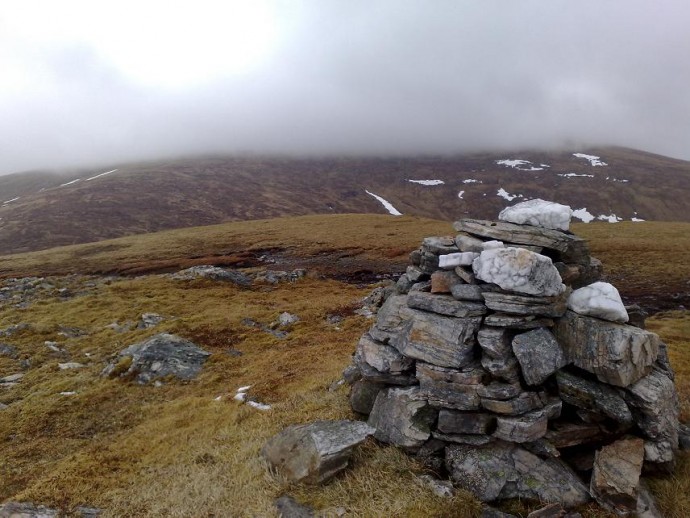 Meall Buidhe in the clouds from the 824m spot height

For some reason I've grown to enjoy boghopping as an activity recently so the stroll up into the clouds on Meall Buidhe was fine - I aimed off to the south from the summit so that I'd know which way to turn when I hit the flat summit ridge. I got good shelter behind the large cairn there. I ditched my rucksack and took in the northern top - Meall Garbh. I actually got a few good views over Rannoch from the bealach between the two tops. The wind picked up on this bit of the walk and I experienced a new sensation - wind blowing up my nose and down my throat even when I had my mouth closed. 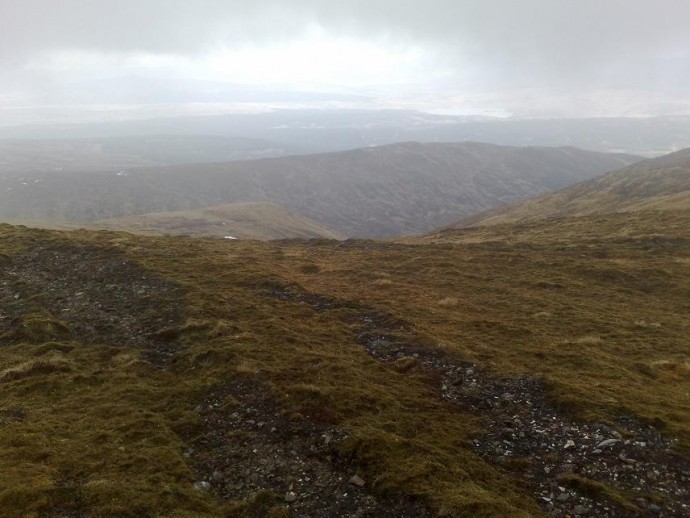 After collecting my rucksack I headed off along the summit ridge towards Meall a' Phuill. In the cloud I didn't notice that I'd walked round the corner of the ridge from heading S to heading W, but before any descent started I'd got the compass out to check I was descending where I wanted to go. I mention this because if you want to descend S back towards Loch an Daimh dam from the ridge you have to cut off the ridge at some point I suspect. Walking off towards Cam Chreag instead accidentally would probably be quite easy in cloud. Having said that, you'd only end up in some extra bogs that you could have avoided - nothing too serious.

The bog going down to Carn Lairig Meachdainn is of a high quality - some proper big, wet puddles to fall in and excellent heathery tussocks. Again, nothing steep or difficult all the way to the top of Cam Chreag. There two hills are pretty easy to combine. It makes far more sense to do Cam Chreag with Meall Buidhe than with the other Glen Lyon Corbett, Beinn Dearg. 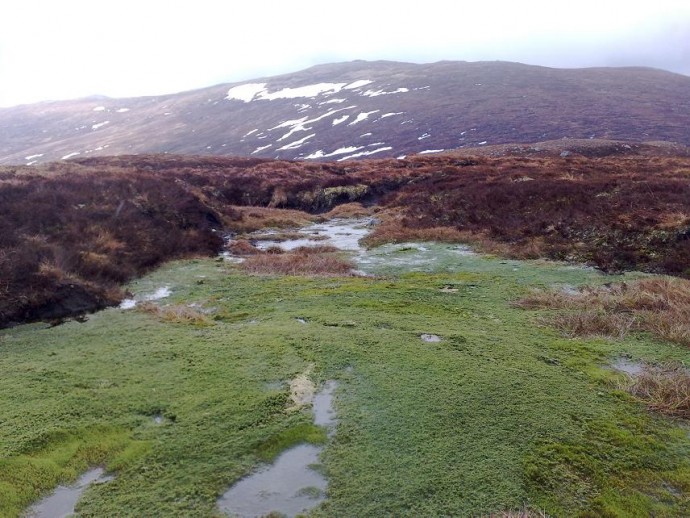 This is what I mean by a quality bog 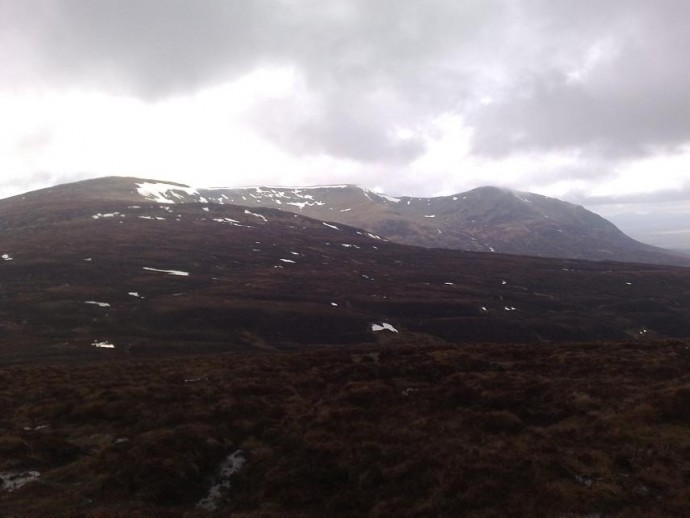 While sheltering behind the Cam Chreag cairn, it actually cleared and I got some views off to the north-east towards the Cairngorms. But I liked most of all the views back over the bog and along Loch an Daimh from the descent back towards the car, a descent peppered with glacial erratics, and through bog-preserved tree stumps. It pretty much rained all day, there was hardly a step on the walk that didn't go squidge, but my spirits were never dampened. 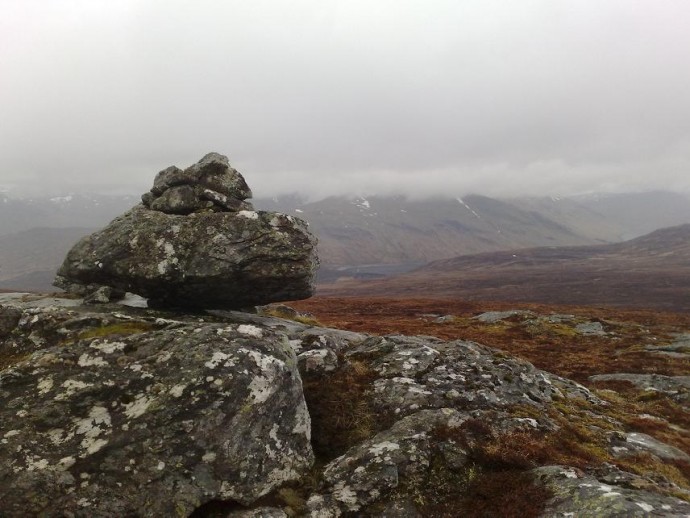 Erratic and cairn over Loch an Daimh Re: Scrambling on Meall Buidhe and Cam Chreag?

That is some very impressive bog! Looks a decent day with the bikes whizzing round too

Re: Scrambling on Meall Buidhe and Cam Chreag?

This was my first and only munro so far and the views are super.