Every year 3 of us, my brother John, mate Leslie and myself head off to the hills for our annual jolly. This year we're in Roybridge staying at the Grey Corries bunkhouse. Yesterday we did the two Munro's south of Loch Treig at Fersit. The weather was all claggy and no views from either summit. Couldn't even see the Loch. Not a good start however we were hopeful for today.
Having read about Creag Meagaidh I wanted to get these done but only if we could get the views.
After eating one of John's great fry up breakfasts we set off to Aberarder. The car park was very quiet but it was Tuesday.
Donned all our gear and with great expectations we set off along the good path, soon passing the Nature Reserve buildings. The walking was easy, the clouds were broken and patches of blue sky shone through. We were planning on following the WH route but didn't see the cairn indicating the branch track though I did see a rough track through heather which I now realise was probably it. We continued on, getting higher on the main path and the plan was to branch off right to climb up the open hillside to just west off Na Cnapanan. After about 2 km I could see, "The Window" far off to the west covered in snow. I knew this was our descent route and wondered if it could be iced up. A wee discussion was had and it was agreed we would continue to walk along the path to the Coire Ardair and check out the "Window". For the next hour we followed the good path as it made its way to the Coire and its Lochan. It was only near the end that the Lochan revealed itself nestling in its wonderful setting. The clouds that had covered the upper cliffs of the Coire had now disappeared. It was beautiful and quiet. It was also warm. Time now for a break and some photo taking. 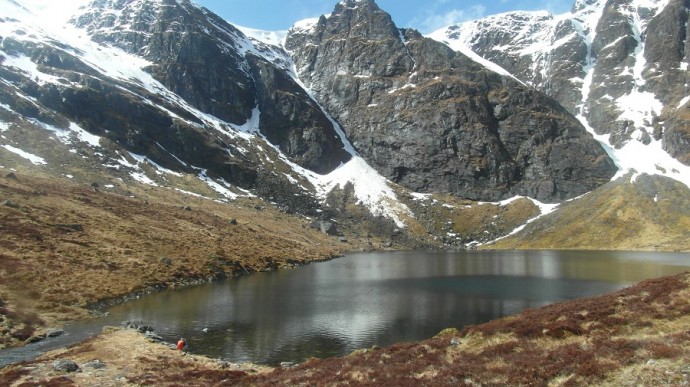 Coire Ardair and its lochan We could have stayed there longer but that " Window" was waiting there inticing us upwards. The snowed up "Window"

The path continued around the lochan before it changed to an earth track climbing up to the gap. At the early stages we could avoid the snow keeping to the eastern side which was stony and grassy. Soon we hit the snowline but luckily there was no ice, a relief to us all and we advanced upwards quite easily.
A lone guy overtook us not saying much as we all said hello. Oh well!! The climb eased off crossing more snow till we hit the Bealach.
Here the path was now snow free.
Turning left a good path zig zagged its way up the hillside to the Creag Meagaidh plateau keeping away from the Coire Ardair cliffs to our left. To our right we could see the whole summit plateau was covered in snow glistening in the afternoon sunshine. Still we had over a km of nice easy walking to take us to the summit cairn passing Mad Megs cairn on the way. After 4 hours of walking we were now at the summit, our first Munro of the day at 1130metres. The guy that passed us earlier was taking photos but wouldn't engage in conversation. Soon he left leaving us to enjoy our lunch in peace. Looking around, the snow covered plateau made quite a contrast to the surrounding hills that were snow free. Rested after our lunch we retraced our steps in the snow heading back to the “Window” and its bealach. Ahead we could see our route along the Stob Poite a’ Choire Ardair flattish ridgeline. An easy descent back to the bealach


Soon we reached the bealach and now we had the climb up to Munro no. 2. An easy ascent on a good track took us to Stob Poite a’ Choire Ardair with its small cairn. No posing here as we walked on enjoying the views all around. After getting no views yesterday on Stob Coire Sgriodain and Chno Dearg at Fersit this was now heaven.
We followed the old rusting fence posts along the flattish ridge always looking back to the impressive Coire Ardair. When you get views like this you don’t want it to end. Snow clung forming cornices to the cliff line. Ahead 2 guys were coming towards us. We chatted as you do and they asked us about “The Window ”. We told them we had no problems in getting up. They were relieved to hear this as they’d seen the snow earlier. They could now enjoy the rest of their hike.
Descending north eastwards around Coire a’ Chriochairein we came to a steepish snow bank dropping to Uinneas Min Choire. No footsteps to follow so we traversed to our left to find a snow free spot. Others had done the same as the grassy bank was broken up. Up to the 963m spot height and now an easy walk to Meall an t-Snaim then descending a bit for the final pull up to Carn Liath .
By this time John was well ahead, I think he had a rendevous with a certain Mr “Tennants” back in Roybridge. Still it gave me a chance to photo him in his quest to summit Carn Liath. John up ahead all alone

We took our time, there was no hurry as we ascended the grassy then stony slopes. The large cairn pulled us towards it and soon we had joined John. At 1006m Carn Liath, Munro no. 3 was conquered. I don’t know how we never photographed it. A coffee break and a bite to eat was enjoyed before the long descent.
Walking back the same way for a while before we turned left to take the easy slopes southeast towards Na Cnapanan. Somehow we all took different lines as we descended quickly. Down to the path with Loch Laggan below

Before Na Cnapanan we cut steeply down westwards on the heathery slopes to the Coire Ardair path.
Once all together all we had was a 2km walk back to the car and maybe we’ll all enjoy a date with Mr Tennents.

Nice one Charlie! What did you do to upset the lone walker?????

Coire Adair and the lochan is certainly a delight, it's a beautiful spot.

Hopefully get out that way in a month or so

Great report and pics Charlie, well done. Another good week had and with our new recruit Gordie hopefully we will see him next year at our annual jolly.