This was the start of what was planned more or less as a mop up exercise - two days spent working my way back from Howtown to Patterdale to Windermere, to leave me with just a kind of two-day Longsleddale round a week later to finish the Far Eastern Fells and finally get me onto High Street, which was the aim of my first ever hillwalk in the Lakes, more than a year ago.

When I'd booked it months before, it seemed fairly likely that April would be spring. Sadly the weather had other ideas and it was pretty wintry - but since it was all booked I went, with my new fleece lined trousers and other warm clothes.

It was the usual start to one of these adventures - train to Windermere, and walk up to the youth hostel in the dark - but there was enough light left to see that Windermere had daffodils out, which was further than Edinburgh had got! Then back to Windermere in the morning to go shopping, and off to Glenridding by bus. I had just enough time before the boat to go and buy grippy things for my feet... not too sure what lay ahead.

From the boat towards Martindale I was still following in the tracks of that first weekend in the hills, up the Howtown zigzags. Of course, having come prepared with all my warm clothes, it was now blazing sunshine and warming up fast, and I had my jacket off as soon as I started climbing. There were signs around of the hard winter - a badger (the first I'd ever seen) lying dead where the roads divide in Martindale, a sheep and lambs piled up in the farmyard at Dale Head, and a dead deer by the path slightly further up.

Having had to wait for the bus and the second boat of the day it was about noon by now, and I stopped for a first lunch just past Dale Head, on the other side of a wall from the sheep.

There was quite a lot of snow still on the hills in Ramps Gill, especially the eastern side, but less in Bannerdale, and almost none, thankfully, on the west side which I was heading up. The path cuts upwards, clinging to the side of the valley - the kind of path where I loved almost every minute of it, and hated a few others! I've decided though that I much prefer climbing up to the head of a valley, where you can see the first destination from the start and then get the views opening up as you come out the top, to starting off up the convex slope of a hill from the start, with the skyline always getting further away. Maybe there would be something to be said for bagging valleys instead of hills... There is a path up here, honest

It was pretty warm for walking, but Angle Tarn obviously didn't agree - there were geese making a lot of noise over the only bit of open water, someone walking about on the ice at the far side, and some very artistic bits nearby. I had my second lunchbreak there! My plan had been to head round the top of Bannerdale, onto Rest Dodd, and then out onto the Nab and back - and I had a go - but there was so much snow lying on the north side of Rest Dodd that there was no way I was going to make it down. If I'd had my waterproof trousers instead of the too-warm warm ones, I might have been able to slide down it in stages, but I hadn't, so I couldn't. This is the second time I've failed to make it onto the Nab! 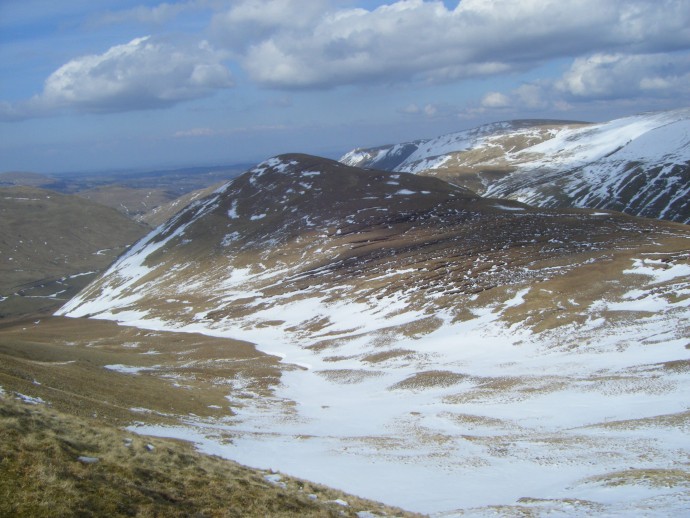 Otherwise the going wasn't bad at all - patches of snow mixed with a lot of grass. I was avoiding the snow where I could - being a wuss - but it was easy to see where other people had crossed it, and it wasn't so much slippery as wet to stick your feet through. There were quite a few people about, too, mostly on the main path up to High Street.

After that disappointment, I headed back onto my planned route, out onto Beda Fell. Quite a nice knobbly sort of hill, but further up to the summit than it needed to be... I had thought of the lakeside path back to Patterdale, since I knew I'd be too late for the last boat, but having been foiled in hill bagging I decided that I was at least going to bag Boredale by climbing out the head - I wasn't sure if I had to go right down the nose of the hill to get there, but finding myself with a clear slope to my left and no walls before the road I decided to go for a shortcut.

Cutting down the slope to Boredale I discovered that something else was heading downhill parallel to me, which turned out to be my second badger of the day, and the first live one I've ever seen - probably the most exciting moment of the day! It didn't seem too bothered by me, either, although it wandered off when I tried to get too close. 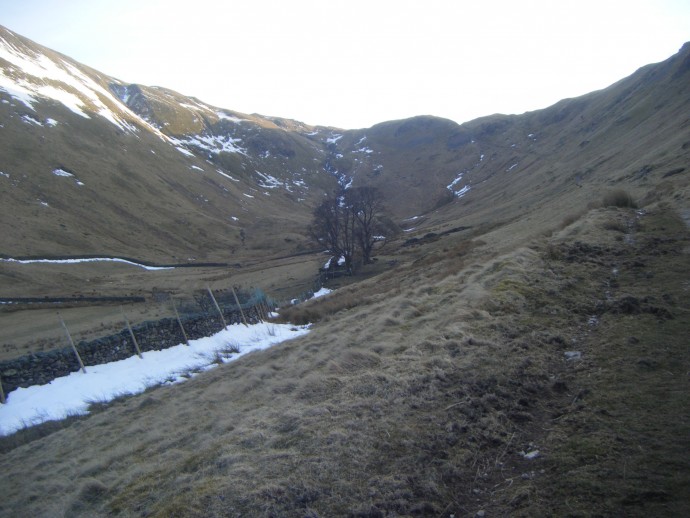 Boredale was another nice valley, with snow piled by the sides of the road - and I saw my third badger of the day, scrambling uphill for a change. Reading about badgers afterwards it seems to have been a bit early for them - before 7, and over an hour before sunset - but they didn't seem to think so.

It felt nice to be using one of the old foot passes as a way home to bed instead of just a way to higher places, but it's a fairly nasty climb out the top, steep and full of stones. 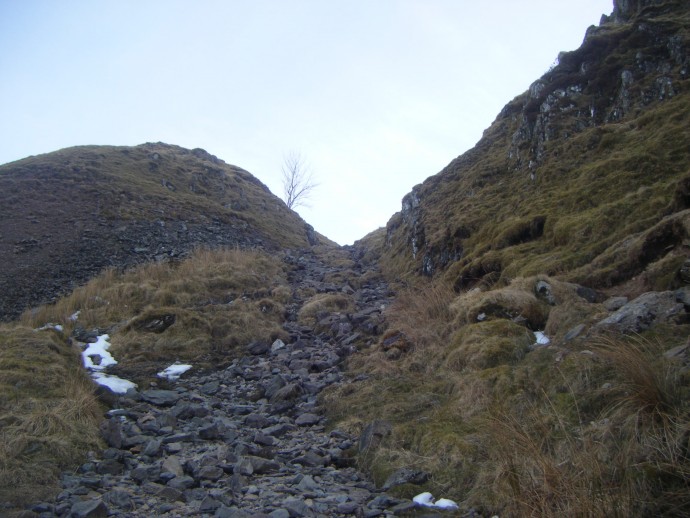 The path down from Boredale Hause was the worst part of the whole journey - trampled snow, which was bad, and slippery mud which was a whole lot worse. And, as usual, I slipped and ended up wet from hip to ankle...

But I reached the bottom at last, and Patterdale and a late dinner in the pub, where I was careful to sit on a wooden seat - but they didn't really seem to mind the mud. I suppose they're used to it