This has got to be one of the best walks ever; vying for top spot with ‘Ringing Stone and Dun Mor Broch’ on Tiree. We planned a leisurely stroll for this route with nothing else pencilled in for that day during a short mid-week break which could and should have been much longer. Coll and Tiree have some of the nicest beaches we have seen which might only be bettered by the Outer Hebrides such as Benbecula and Harris. If you don’t like a beach or there is somebody else on it, just move to the next one. It really is that beautiful, quiet and peaceful.
Our day started with a late rise, hearty breakfast and a supplied packed lunch with a 5 mile cycle ride from Arinagour into the breeze following the B8070 for the most direct route to the start at the parking area. With bikes chained to the fence, we proceed along the track towards Ben Feall for a simple climb following a track for most of the way to the top. The view from the top looking over Feall Bay, Coll, Gunna, Tiree and beyond is superb, considering you are just 70m up. 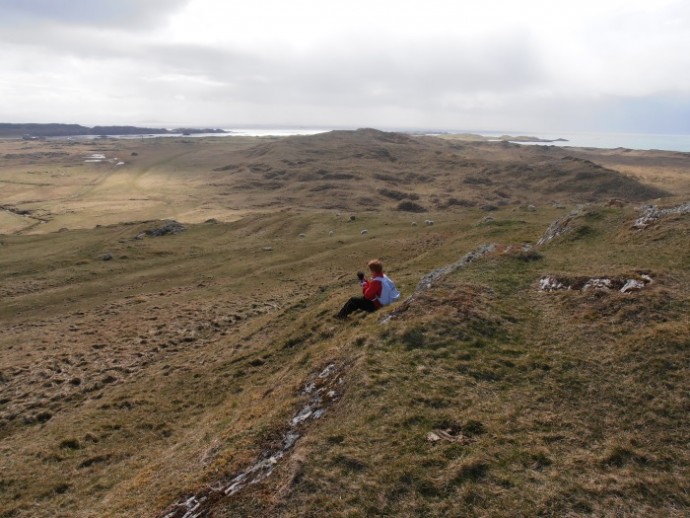 Descending back to the main track, we then walked along the beautiful Feall beach passing a stretch of seaweed to begin with then nothing but sand glorious sand for several hundred metres. Sitting on the beach with not another soul in sight, it is now time for a sandwich and wee swally from the small bottle of wine included in each packed lunch. At the far end, a bold sign “beware of the bulls” is positioned at the gate. Now this might be a ploy by the farmer but it certainly worked for us, so we followed the fence a short bit, swung round the corner post above the rocks, followed the outside of the fence as far as it went then crossed the field farther on. 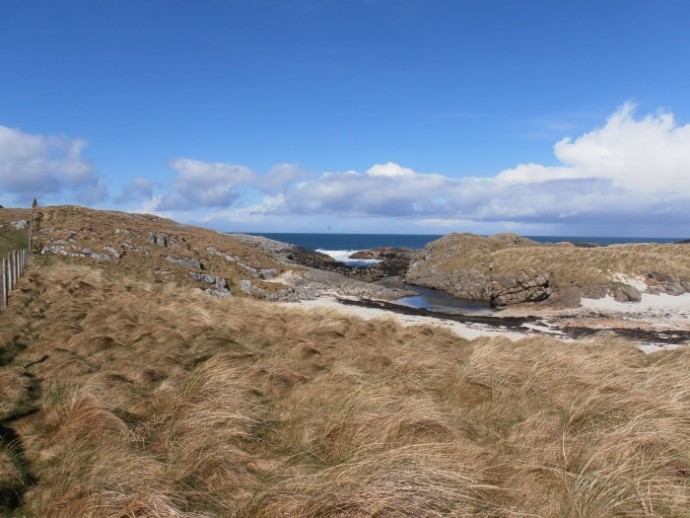 No bull seen but wasn’t prepared to take the chance. We’ve seen them close up on Tiree and they are just solid muscle and bone with plenty of both. It is polite to request permission for this area down to Crossapol Beach, which the hotel owners may arrange for you if you are staying there.
After a short distance, we found a marker post pointing the way to the next markers (anti-clockwise being the best option for this walk) keeping a watchful eye open for those bulls. Thankfully, it was just sheep and curious lambs. Over a stile at NM1218 5348 and on to Halum Bay.
Eventually, we are at Calgary Point trig point and time for the remainder of that delicious packed lunch (with the last of the wine). Well, we weren’t driving and still a long way to go to walk it off. It was a lovely day. From the trig point, the beaches stretch south all the way round the coast which we followed until we came to a sheep track heading north up the east side of the peninsula keeping a fence and the wind turbines on our right. It was a bit wet and soft underneath in places but easy to circumvent. Eventually, we come to a padlocked gate which we climbed over (yes, at the hinge side) and follow the vehicle track through an open field to the farm buildings and on to Crossapol Beach. From here, another leisurely stroll along yet another wonderful beach at Crossapol Bay almost to the end where a track leads up from the beach and back to the start. The mausoleum is visible on the right.
Unfortunately, we still had a 5 mile cycle back to Arinagour, by which time some black clouds had drifted over and dropped a load of hailstones on us, blowing from the north. This might not seem too bad, but being our second day on the island and already with faces burned and dry from the previous day’s excursion, the hail was extremely sore on the face so we had to stop and face downwind for the typical 5 minutes. If only we had been 10 minutes quicker, we could have got inside before the hail started. Never mind. Another addition to our experiences. Who holidays in Scotland for the weather anyway but where else will you find such beautiful scenery? All-in-all, a great day and another great walk by walkhighlands.co.uk.