A warm and sunny ramble up Largo Law

A warm and sunny ramble up Largo Law


As my usual walking companion, captainslow, had gone away for the weekend, I decided to seize the opportunity to test my independent hiking skills. Largo Law is the most conveniently located sub-2000 from St Andrews, so one 25 minute bus ride later I was looking up at the hill and revelling in a rare day of glorious sunshine (as I'm sure many others were too!) Near the beginning of the route up to Largo Law.

The beginning of the route was very clearly signposted and I ambled along the grassy track quite happily, without having to turn to the map. The wild flowers were looking quite beautiful and I also had the chance to see some house martins diving backwards and forwards in the air above a small pool to the left of the path. As I passed by Chesterstone farm and began to climb slightly, I could see that a fair few other people had had the same idea as me, judging by the string of coloured dots further up the slope.

Where the main steep section of ascent started I met some people who had decided to call it a day before attempting the hill, and they kindly offered to look after my pack for me. Explaining that I was in training (sort of), I thanked them and continued on to tackle the slope. As the walk plan had suggested, it was indeed very steep, and there was barely a path at all, but by sticking to the grassy clumps it wasn't too difficult. I was just glad that it was so dry, because muddy conditions would have required much more caution (and I still have a hole in my left boot). 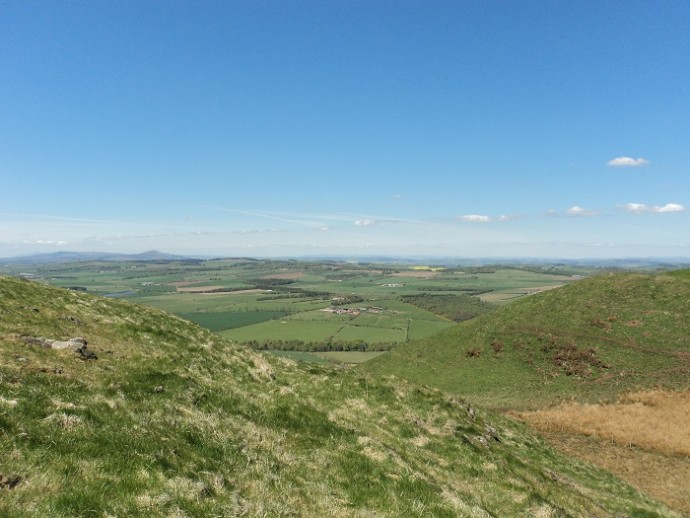 From the dip before the summit.

After that it really was simply a matter of steadily climbing and pausing frequently to admire the amazing views. Once I got to the summit I could see all over Fife and further afield to some snow-capped mountains in the distance. The sea looked particularly beautiful- was almost tempted to go for a swim when I got home! Snow in the distance, from the summit.

So, in summary, a lovely short hike in perfect weather conditions: a great way to spend a Saturday afternoon. Re: A warm and sunny ramble up Largo Law

One day I will venture out that way

Re: A warm and sunny ramble up Largo Law

Thanks for posting this I had thought of heading up here on Friday but we ended up somewhere else instead, will definitely need to visit this one as what lovely Fife views you get.