Ben Lomond via the Ptarmigan ridge

Ben Lomond via the Ptarmigan ridge


Hi, during my week in Scotland 2 weeks ago, I climbed Stac Pollaidh under a nice sunshine, I failed to complete Cùl Mor and I did Ben Lomond via the Ptarmigan ridge.

Having done Suilven last year I was pretty "confident" about the most southerly Munro. So I set off at 7am from Rowardenann under some high clouds: I passed the war memorial: No fancy picture, just the one nearly everyone gets but I still like it! At some point I saw a sign telling I went too far. Obviously I wasn't the first. It kindly advised me to turn back and start climbing near the river: This was a very good tip indeed. Height is gained fairly quickly and the Loch starts to show as well as the Cobbler: The Cobbler, pretty scary in his coat of clouds.

The views to the loch opening up. On the left poles can be seen if your are fit enough don't hesitate to pick one up and help the Rangers rebuild the fence. I didn't go very very far with mine but "Every little helps" (at least that's what my Ego told me): Still quite a lot of walking to do with someone who overtook me with a pole (when I dropped mine five minutes ago) ... I really do need to exercise! At last the Ben starts to show... I think that calls for a wee break: At some point patches of snow start to show, I hope I haven't been over-confident I haven't got pictures of the scrambling part, I was too busy trying not to take off. It wasn't too technical but it did look steep and gusts of wind took my balance off guard on several occasions which got my heart pumping a little faster... Once I got to the cairn I could safely say that I really enjoyed the walk, some views from the top (with the impressive north face): 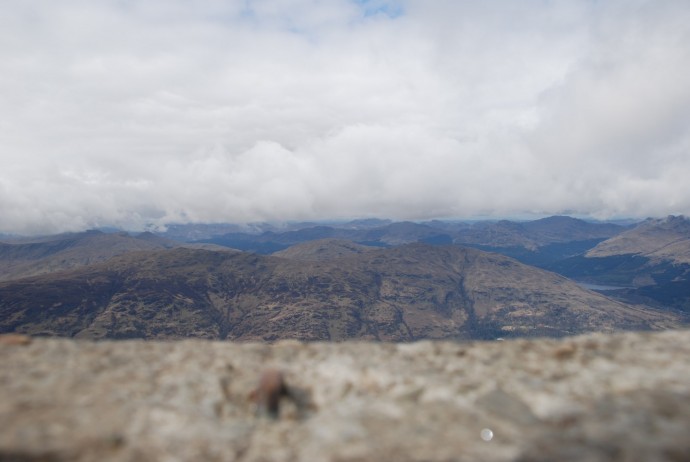 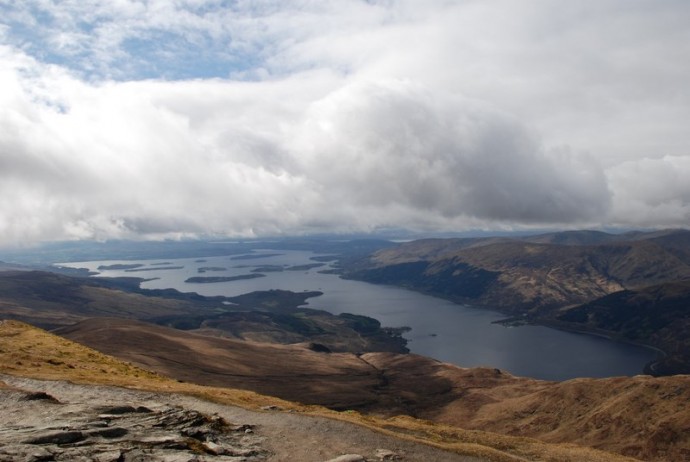 Ah, and to redeem myself from not taking pictures of the scramble I made a small video. Sorry for the music, on second thought it doesn't seem to fit quite right.

To conclude, I guess I now understand why people say that Suilven isn't as difficult as it looks because Ben Lomond didn't look scary but my heart got pumping definitely faster than on Suilven. But that's no real surprise in the end, you should never underestimate any hill.