No Going Bhac - A Hard Won Pair Up Glen Ey

No Going Bhac - A Hard Won Pair Up Glen Ey

There was an early start, a three hour drive, and five miles or so up Glen Ey on the bike: then the hard work began. 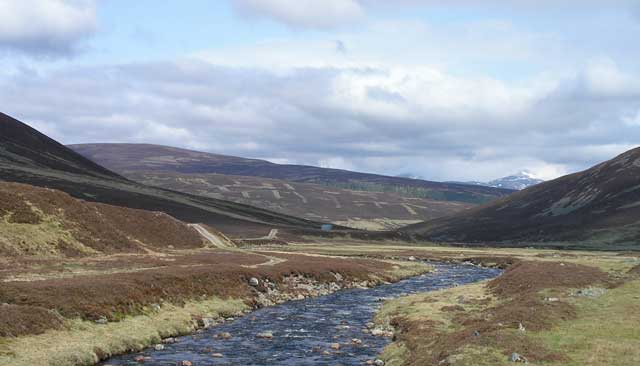 Snaking up Glen Ey - it's a long way! Beyond the ruined lodge, I mistakenly followed the clear tracks that led up to the shooting butts on the slopes of Carn Bhac: Land Rover tracks for lunchtime hampers, chilled champagne, and transport for the feathered casualties of the day. Unfortunately, there was no such clarity or consistency with regard to anything leading up the Allt Beinn Iutharn where I should have gone.

I planned to enjoy the ridge between Beinn Iutharn Beag and Mam nan Carn before approaching Iutharn Mhor itself from the south. It took me a while to realise my naive assumption that one stretch of vague track would link to the next – or even another – as I worked my way up and down the peaty troughs and back to my intended route.

As I moved round between the slopes of An Sochach and the north-eastern spur of Beinn Iutharn Mor I scanned the skyline, seeking the links between Beinn Iutharn Beag, Mam Nan Carn and Beinn Iutharn Mor. However, they had tucked themselves away, giving the impression of a steepling roller coaster with far deeper drops in between than the map hinted. Maybe a shorter, if briefly strenuous, and more direct approach to the Munro would be up the nose to my right.

But, ever the glutton for punishment, the prospect of a good horseshoe spurred me on; the legacy of a lifetime of Lakeland jaunts. Beinn Iutharn Mhor from Beag - somewhere in there

A bit of lung and leg bursting later this spell of hard work was behind me, and once at the cairn on Bein Iutharn Beag the way revealed itself. Gentler slopes than I had previously feared stretched ahead.

The day had started grey; the occasional encounter with “bright” on the approach up Glen Ey. By the time I’d left the copse and crumbled lodge at Altanour, Beinn Iutharn Mor was capped with cloud: the MWIS prediction of 50% cloud-free was threatening to come true. With Mam nan Carn now in cloud I suspected that I knew which 50% I was going to be in.

A pimple on the horizon - the cairn on Beinn Iutharn Mhor

Despite my pessimism (another word for cynicism tinged with experience and reality) a stiffening breeze began to prove me wrong. On reaching the summit cairn of Beinn Iutharn Mhor the top cleared. To say there was a view would exaggerate. Immediate neighbours were clear but only splashes of white in the distant haze hinted at where corries and cornices on the Cairngorm plateau clung on to the vestige of winter snow. How were we to know that just a couple of days later another foot or more would get dumped. After the curving walk round to the north east top, guides warn of a steep descent from Beinn Iutharn Mhor before crossing to Carn Bhac. That was the least of the challenge.

Call it the slough of despond, the pit of despair, or just a downright trough of gloom; the way to Carn Bhac lived up to its name as the “hill of peat banks.” Tracks amidst the peat hags were as rare as the onset of summer. Naiveté was again thrashed out of me as I attempted to maintain a straight course towards the skyline.

In, out; up, down; round, back and occasionally forward. "an undulating ridge of eroded peat bags" - across to Carn Bhac

The rounded hump that rose above the surrounding swamps was finally reached with a sense of relief and a vow never to return. The usual SMC route suggested 20km to claim this Munro, but my GPS told me that I’d so far added at least 2.5km to that by the tortuous route between the two.

Another pimple on the horizon - Carn Bhac this time One of the clearest tracks of the day finally appeared on leaving the top of Carn Bhac. Snaking down past the grouse shooting butts, the way back to Altanour stood out like a chalk line.

Appreciating the easy descent, I was down at the copse by Altanour within the hour and even more grateful that I didn’t need to face the lengthy walk out. Half an hour later I was back at Inverey loading the bike into the back of the car and heading for sustenance in Braemar.

You’ve got to eat a peck of dirt before you die, or so it’s said. Well, apart from the high level walk between Beinn Iutharm Beag and Mhor, this felt like an absolute mouthful.

Re: No Going Bhac - A Hard Won Pair Up Glen Ey

That's them done now Nigel,you'll be glad they're out the way,also vowed never to return to Carn Bhac.We walked the whole way,actually quite enjoyed the walk in and out and Beinn Iutharn Mhor would be better climbed from the other side maybe with Carn An Righ but those peat hags and Carn Bhac ....na