Arrived at Ben More Farm around 0845. We could see Ben More and it looked pretty steep and there was still some snow further up. We started our walk at 0900 and the weather was fair. We made our way up the winding path then onto the start of the first mountain. It was very steep and soon our legs were being tested. We were soon joined by another couple with a dog and they set a faster pace than us so we let them go ahead .

After around 90 mins it started to get cold and misty and it was hard to belive it was May !

A young lad joined us then stormed ahead and was soon out of sight.Every time we came to what we thought was the top there was always another summit ahead.Eventually we reached a cold, and very misty summit where we stopped for some lunch.

Then it started to snow ! We couldn't really see our next challenge as the fog was quite heavy but we got a glimpse of her and she looked awesome

After our wee break we headed down towards Stob Binnein and passed some walkers from Europe who had come up on the other side of Ben More. We made our way down into the dip and passed the huge boulder on our right. Then we were at the foot of Stob and we just wanted to get to the top as quick as possible due to being rather wet and probably felt a bit sorry for ourselves too

We were soon making good progress and bumped into the young lad on his way down then 10 minutes later the couple with the dog and they said it was about a half hour to the summit and we wished them well and carried on in our different directions. I wished I was going down with them but knew I had to get to the top. The path winded it's way up and there was plenty snow near the top and we had to take care as it was slippy in parts and we never had crampons

We also saw a couple of Ptarmigans near the top and they were quite comical walking in the snow just ahead of us. Finally we made the summit and sadly it was too foggy for any decent pictures but we were so happy to have made it. We didn't hang around though and were soon hurrying down. We got to the bottom of Stob and were looking for a path down near the big boulder.

We found a path to head down near the boulder and it was very slippy in parts and I had one cracking fall and landed face first in a bog ! Happy Days

. It took quite some time to get to the bottom and onto a proper track. We headed along the old road for what seemed like an eternity and came accross a reasonably fresh landslide which could only have happened a week or so earlier. We eventually arrived back at the car dripping wet and very tired, but so happy to have done it. Another two conquered . 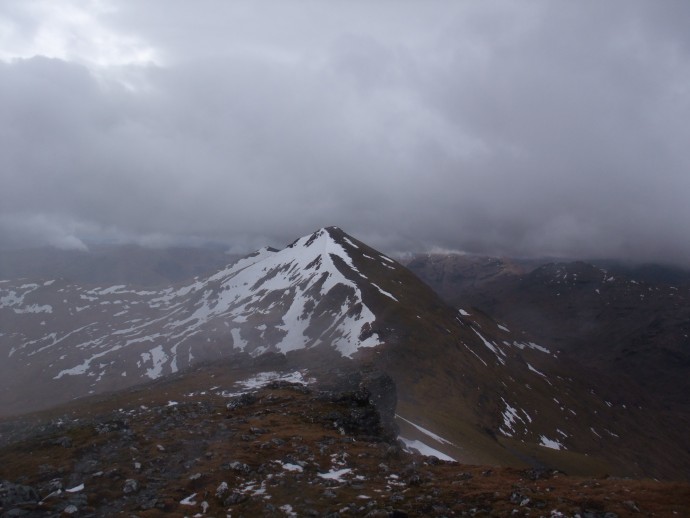 Thinking about doing these 2 on Saturday as a solo outing,,,hoping June brings better weather lol

have had some fantastic views OF Ben More & SB, but also didnt really get a view FROM either!

GillC wrote:Thinking about doing these 2 on Saturday as a solo outing,,,hoping June brings better weather lol

I hope you managed them on Saturday and the weather was great too for you.

riverlodge wrote:have had some fantastic views OF Ben More & SB, but also didnt really get a view FROM either!

Think you must have gone same day as me !!