February and March 2013 were a dead loss for me in hillwalking terms, due to a combination of crap weather and a busy time at work

. By the beginning of April I was itching to get some sort of walk in despite the snow

. My old school friend Rowena, now resident in London, texted me to say that she was going to be up in Hawick with her family for a week at Easter, and she was wondering whether I fancied a walk on the 1st April, to give her a bit of fresh air and a break from the kids. Sounded like a plan

!
However, there was still a lot of unseasonal spring snow around. We considered several options, including White Coomb or other options around Moffat, but we eventually settled on the nearest hill of any note to Hawick, the Graham Cauldcleuch Head. This has the distinction (?

) of being the nearest hill over 2000 feet to England, although it’s otherwise a fairly undistinguished rounded lump of a thing (as ever, I can empathise

). Nevertheless, there are several good walk reports on the website, including a very nice one from nxmjm

, tackled from the south, that makes it look much more scenic than might be expected.
As I was driving down from Glasgow, we weren’t going to get the earliest start, so we went for the quickest way up, which is from the north via Priesthaugh Farm. The wee unclassified road off to the left of the A7 heading south from Hawick that leads to Priesthaugh was thankfully clear of snow

. I had been a bit worried about where we could get parked without making a nuisance of ourselves, but in fact there was plenty of grass-verge parking to the right of the road just northeast of the farm where we hopefully wouldn’t be in anyone’s way. 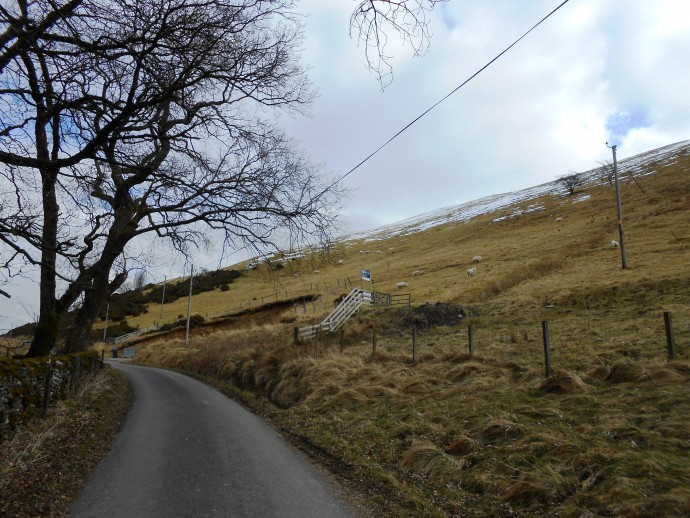 Just about twenty metres up the road, a farm track leads off to the right heading for the higher Priesthaugh-Hill Farm, and it is this track that provides easy access to Cauldcleuch Head. This gave an easy and scenic stoat, and we made pretty quick progress initially, discussing the difficulties of getting kids interested in hillwalking (I despair of my three, frankly

), until eventually our objective came into view. It looked more impressive than I’d expected, with the long sweep of Skelfhill Fell, forested on its southeastern flanks, leading up to the high snow-covered dome of Cauldcleuch Head on the left. 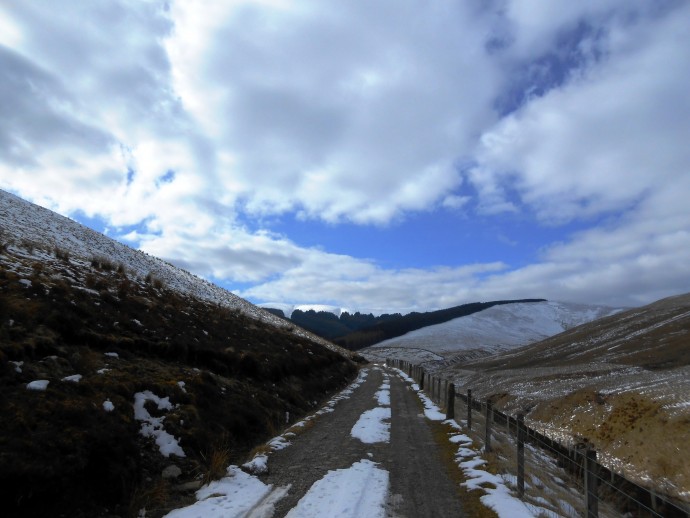 Where the track forked, we took the right-hand branch leading down across the Priesthaugh Burn to Priesthaugh-Hill Farm. 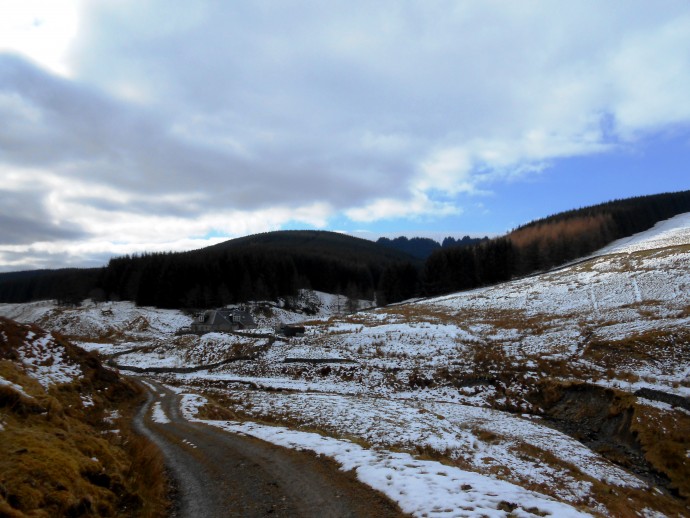 Next came a bit of limbo-dancing under an electric fence: probably not a very edifying sight 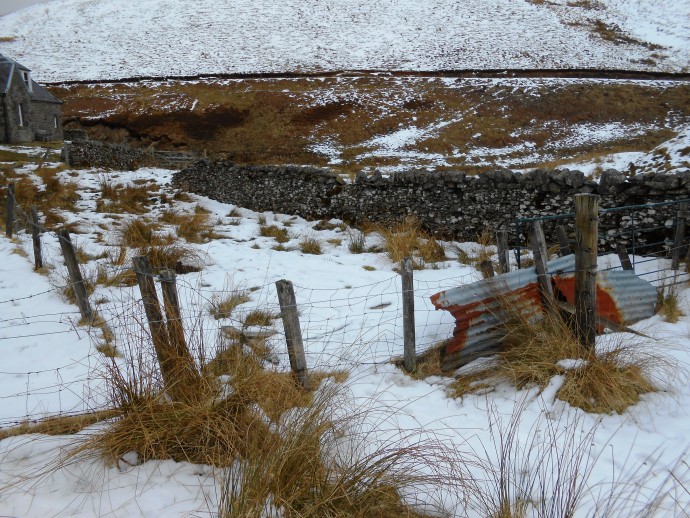 From here on, although the way up was very obvious (just following our noses up, right against the forest fence, thinking of Good King Wenceslas), it was also fairly slow going, as the snow lay all about, deep and crisp but not particularly even on the tussocky grass. 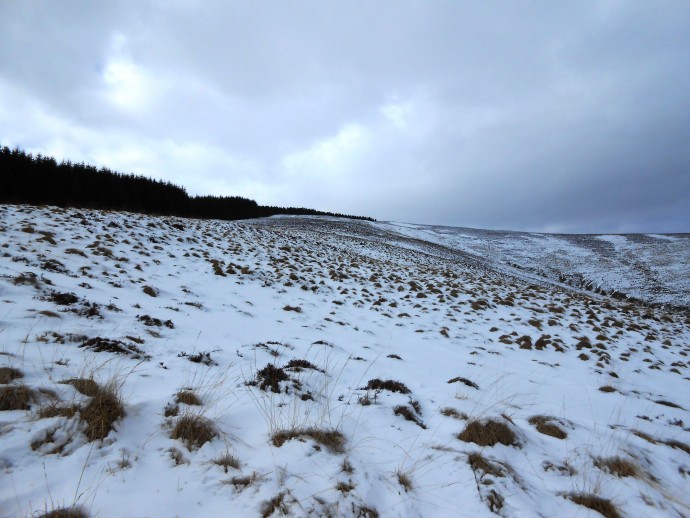 As we gained height, there were some fine views out north over Holywell Rig, back towards Hawick, with (I think) the Moffat hills visible away in the distance: 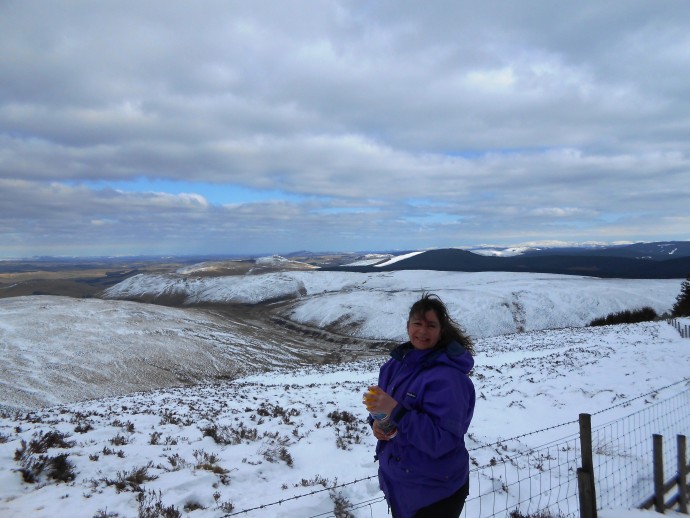 Eventually we got to the top of the forestry, and from here it looked a straightforward Snow Plod over Skelfhill Fell, then round Cauldcleuch Head’s heavily forested northeastern corries to reach the rounded summit. 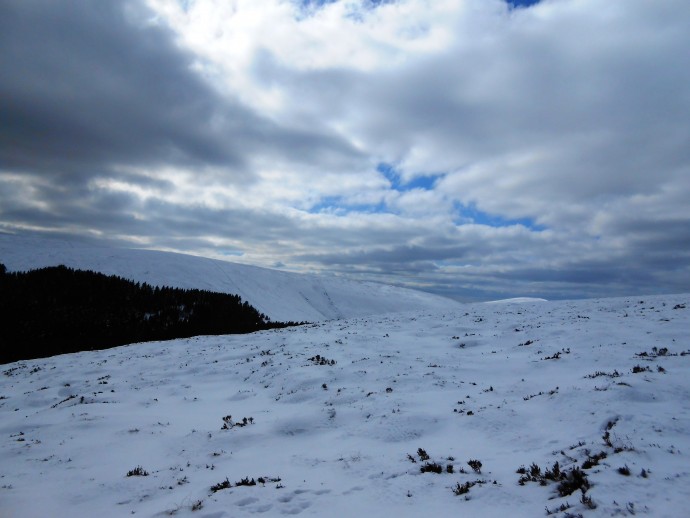 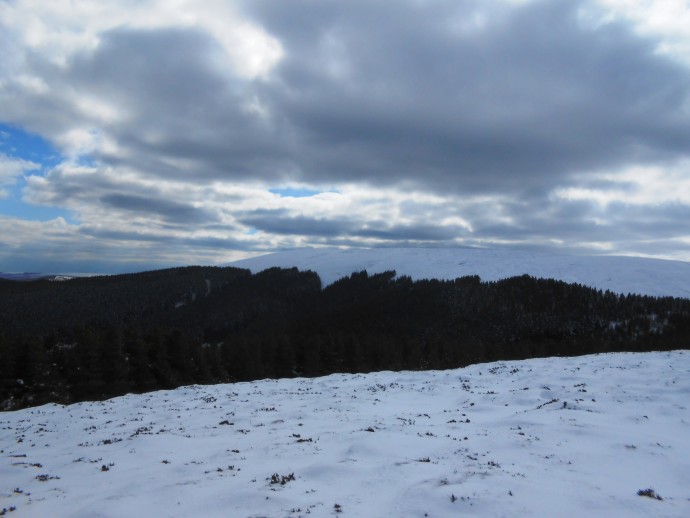 All that snow continued to slow us down quite a bit, though

, and it was a relief to finally get right round the top of the forestry to where a line of fencing led on in the direction of Cauldcleuch Head. More nice views on the way up, over Langtae Hill and Millstone Edge to the west: 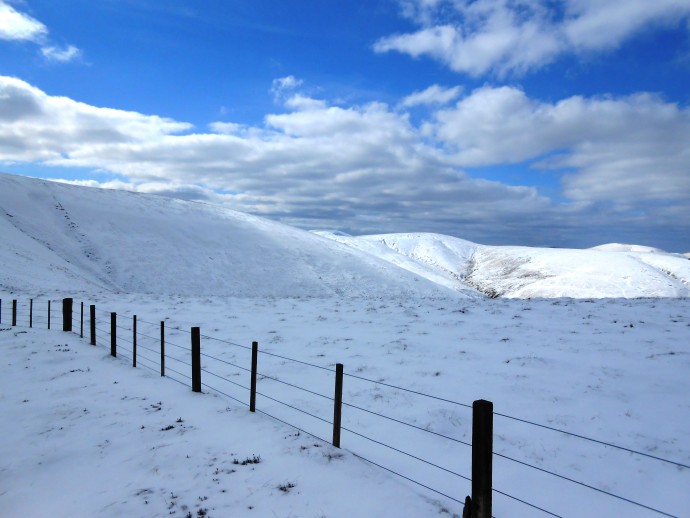 We joined another line of fencing, which led up right towards the main rounded summit of Cauldcleuch Head at last. Again the best views were to the north. The rather pleasing wee well-defined conical hill in the foreground is Skelfhill Pen, a different hill from Skelfhill Fell and surprisingly not even qualifying as a Sub2K Marilyn, although it does have a trig point. The Moffat Corbetts were still visible as big snow-covered lumps in the far distance. And so, at the summit at last

, which lies at the meeting point of three fences, where a slanted iron pole serves as a marker or sorts, just behind a gate. 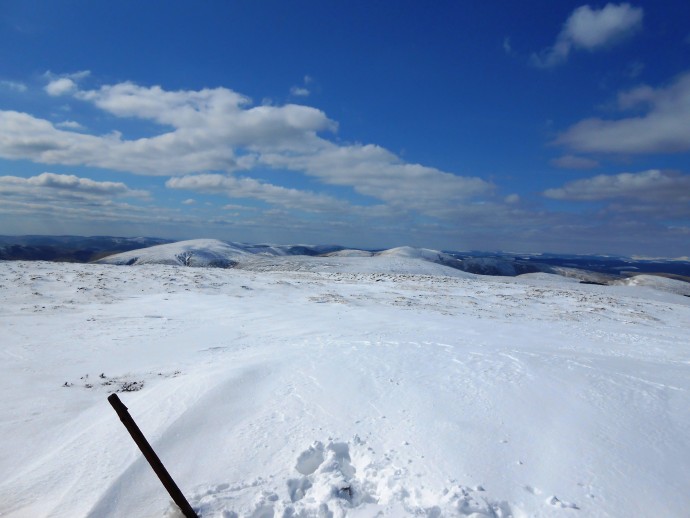 Time for the inevitable Silly Photo! 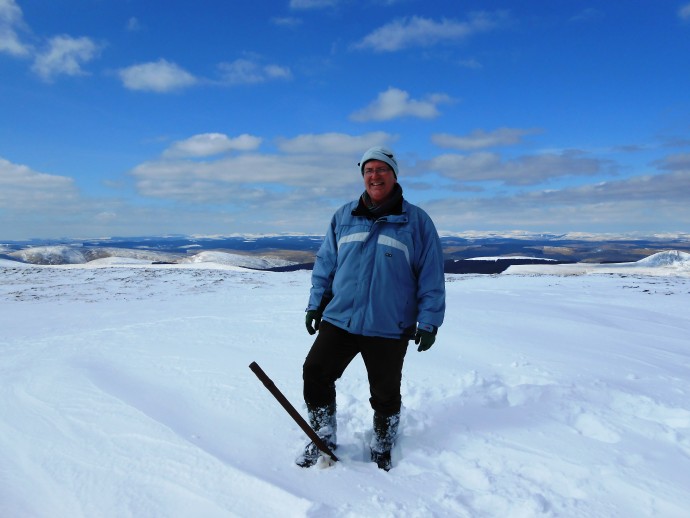 Now, how do you work the auto-timer thingey on this camera? No, not like that 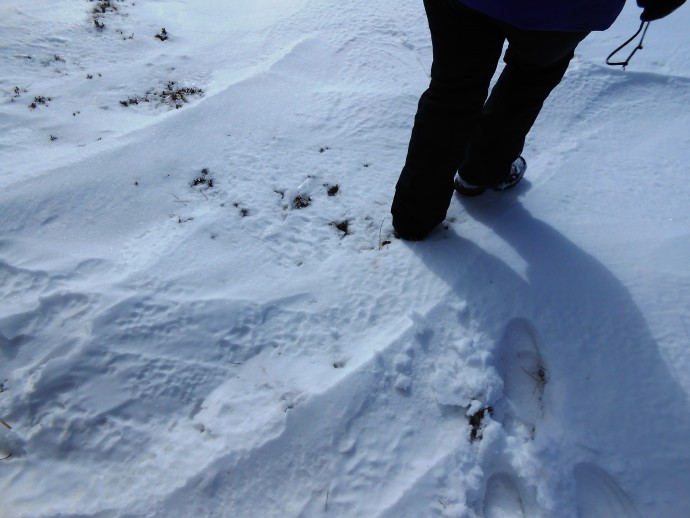 Ah, got it now 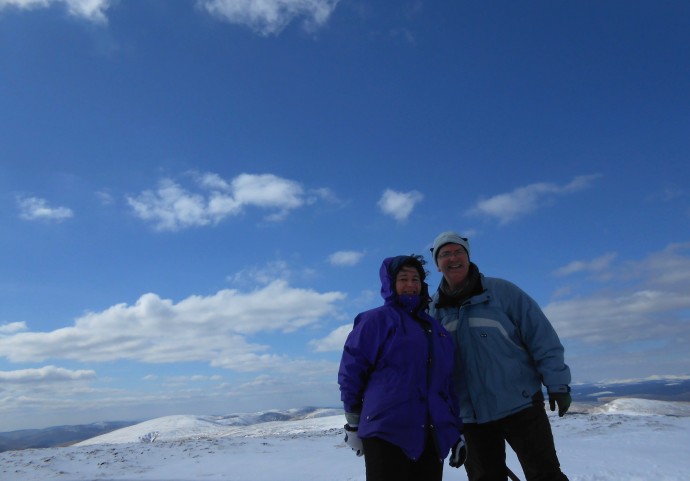 And so it was time to start plodding back downhill. The snow hadn’t got any shallower

, and it took us longer than we expected, although there were still some good views for distraction. Another shot of Skelfhill Pen: And a nice sweeping vista back down Skelfhill Fell towards Priesthaugh-Hill Farm: 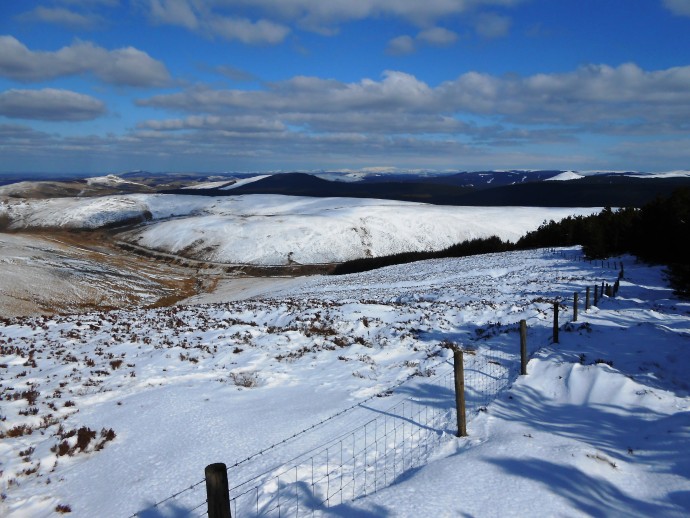 All those Christmas Trees were looking very pretty in the snow, continuing the Good King Wenceslas theme: difficult to believe that it was April 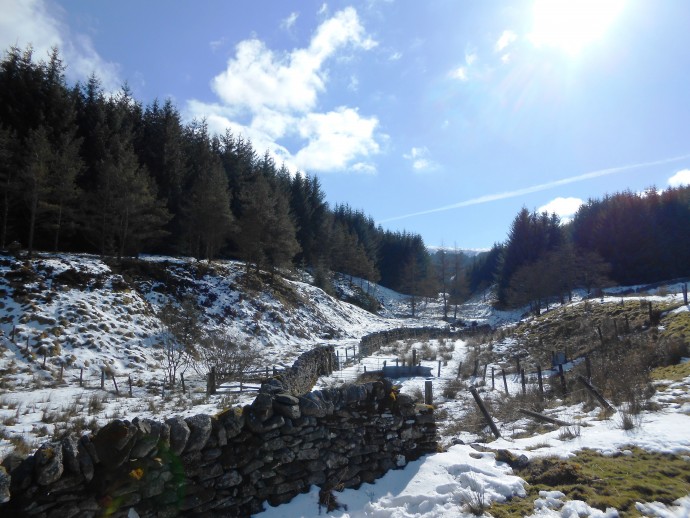 And a final fond look back: 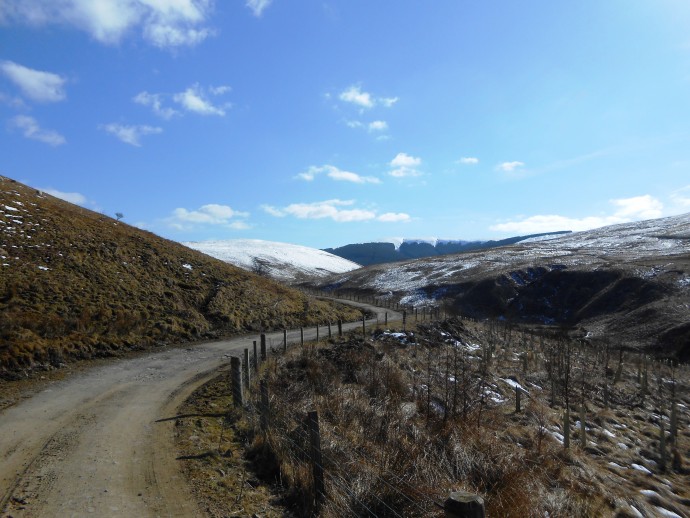 It took us a mildly embarrassing five hours to complete this: I blame the snow

. All the same, there’s no question that the White Stuff managed its usual trick of turning a relatively undistinguished hill into an unexpectedly scenic and enjoyable stravaig