Another beautiful day in the Lakes, and two contrasting short routes to mop up the Far Eastern Hewitts.

hartsop.gpx Open full screen  NB: Walkhighlands is not responsible for the accuracy of gpx files in users posts
From the pretty namesake village at its foot, it’s a fierce and relentless climb up the north ridge of Hartsop Dodd – a zigzag, sometimes-steeped path makes the best of it but it’s still very tough, and probably better avoided in descent. The views, down the valley to Ullswater and over Dovedale to the eastern Fairfield fells, are stunning though – good to look over to those struggling steeply up Hartsop above How and know that what you’re doing probably looks even more daunting to them… Contrastingly easy walking up the broad grassy ridge to Stony Cove Pike from there: probably the wrong name, but it’s a far more flattering one for a high mountain than ‘Caudale Moor’ so I’m sticking with it! 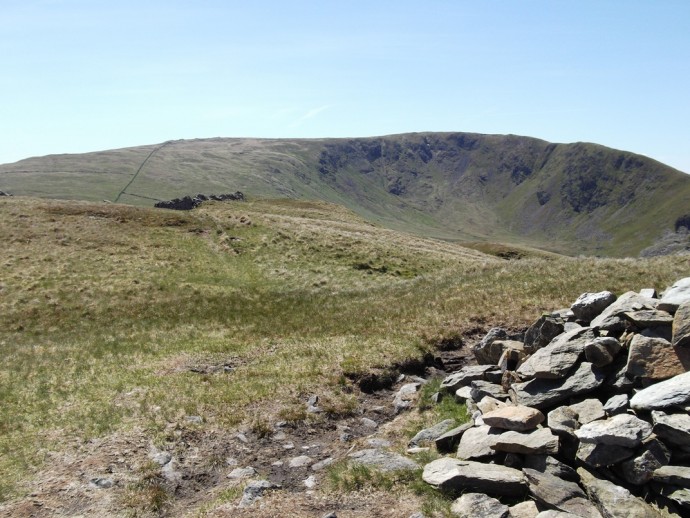 Fairfield etc over Hartsop above How It’s an interesting descent from the summit into Thresthwaite Mouth and then down the gap into the Pasture Beck valley, steep and long (impossible to take quickly) but with plenty of little rock steps to half-scramble down and then a well-made step-path. Gently home from there to finish a pretty testing 5 miles. Past Raven Crag to Threshthwaite Mouth

It might only be 7 or 8 direct miles to Sadgill from there, but it takes a long while in the car – beautiful as Longsleddale is, it’s not a drive you’d want to repeat too often. Sleddale Fell isn’t probably top of many people’s ‘walks to do in the Lakes’ list – for a couple of hours on a perfect summer’s day there wasn’t a soul to be seen – but it’s proof that even the lesser walks in this area beat most things elsewhere: beautiful views, a challenging little route on decent-enough paths, and some fine summits to target.

sleddale.gpx Open full screen  NB: Walkhighlands is not responsible for the accuracy of gpx files in users posts
For the second time in the day, the initial ascent up fields and a stony gully was breath-shorteningly hard work, but it’s easy enough for the rest of the way on generally well-trodden tracks (there may have been ‘no paths’ around here in AW’s day, but that was before he set the routes for thousands to follow…). With a bit of good weather recently, this wasn’t nearly as boggy as anticipated: given some concentrated hopping in the hollow between Grey and Tarn Crags you can just about get around with dry feet. Worth the short detour to the outlier Harrop Pike for good views and a nice little rocky summit (for the sake of a few feet, it’s a bit of a surprise that this isn’t the ‘Wainwright’ ahead of Grey Crag), and the other tops are improved by the well-preserved surveyors’ pillars. Finally, the last couple of miles back down Longsleddale are delightful, Dales-like walking; in the sunshine, this route was far better than ever imagined. 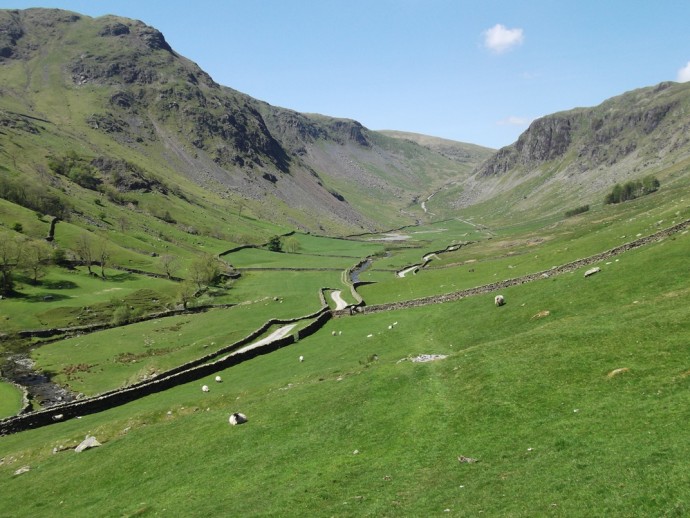 Grey Crag from near Great Howe Good memories of doing most of these last August. Looks like you got much less haze than I did though

A couple of great little walks there Poppie, great pics as well

Jealous - I tried to do those on two different weekends in April and first snow and then wind chased me off the hills!

Definitely looks like you had a good day for it.

Yep I remember taking my Mrs up that way some years ago.

She was not impressed on my choice of route not that there is many other options!

Nice walk tho once on the ridge

Two good walks and great pics.I did Grey crag and Tarn Crag along with Branstree and Selside Pike a couple of Sunday's ago in the mist.
I never really saw much of Longsleddale or the summits which is a pity as the mist never really cleared until I got to Selside Pike on the way back to Mardale.