We specifically chose this route to camp high, in the hope of getting a nice sunset and the loch. The 2 Munros looked easy enough, and there looked to be plenty of spots to camp up high along the route. Our plan was simple, instead of lugging around a full pack over 2 Munros, we would instead start off around lunch time, climb up the ridge and pitch tent on the ridge of Stob Coire Sgriodain. This meant we would only have a couple of hours of carrying a full pack. We would then continue on to climb the 2 Munros after pitching the tent, and dumping our gear.simples...as they say! As I had to catch a flight the next morning it would also be a quick walk back in the morning to the car park.

The route started at Fersit, which is basically a small collection of houses. One track leads down to the Loch Treig, which is fenced off. The car park is a decent size, and can get quite popular with fishermen. After parking up, we followed the road over the river and railway bridge. After passing a house, a delapitated carivan was parked beside a gate to the entrance to the wood. We decided to take this route through the woods. The SMC route looked like it could be a bit boggy. 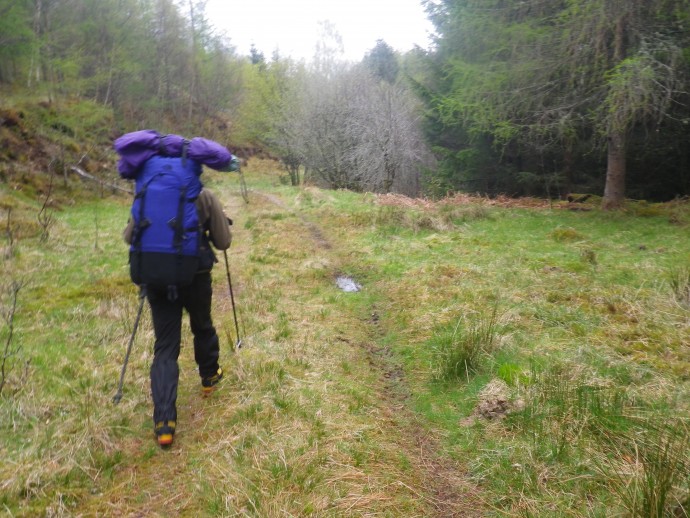 After 15 mins of following a peaceful path through the woods it arrived at a stile. Crossing over it began the slow easy climb up always heading in a southerly direction. Easy ascent - our route ahead

The climb was easy, but the weather got hotter and the temp was meant to be around 22C and no wind, it certainly made you sweat with the full pack! Slow ascent with hills in the background

The ridge up to the top of Sron Garbh-bheinne looked a bit craggy up top, so we kept climbing slowly to the east of the ridge, next to Allt Chaorach Beag. We followed the river most of the way

Walking up the ridge

Taking this route the going was pretty easy. We saw a gully that looked to go exactly were we wanted to pitch our tents on the ridge at 751355. After climbing up this it was pretty flat and there were several good areas to pitch up. We followed the gully on the east side, where the snow is. It was an easy route up with a pack

Time was on our side, sunset around 9:30pm, so after pitching we carried on up to the top of Stob Coire Sgriodain. Here we got great views of the loch, and the surronding hills.

We wanted to get back to the tents for sunset, to capture what sunset we could. we could see the easy slope of Chno Dearg in the distance, and had nearly wished we had our running shoes, as it was a wide broad ridge. Coming off Stob Coire Sgriodain there was another cairn, and in bad visibility care should be taken not to go too east as there were crags, but to continue SE. We made it to the top of Chno Dearg 1hr later, which was relatively easy walking. There's something quite liberating about being in the hill in the evening when you know you dont have to rush off it. It was one of those days, sun, no wind, peace and quite. Good ground on col between the 2 hills A small stream allowed us to fill up flasks for dinner on our way back to the tents. Getting water for dinner from small stream on col below snow

We got back to our tents around 8.30pm. Although we didnt get the idylic sunset we hoped, it was still a great way to climb a couple of Munros.

Last of the light Of course, sunrise was a different matter all together. We woke up at 4:30am to the good old normal scottish pea soup and minimal visibility! With no photo opportunities, we packed up, and followed our route back again back to the car for 7am. We celebrated with a swig of cider, and yes i got back to the airport in plenty of time for my flight! A great way to start the day!