It's funny in life how people we meet can influence us in our decisions. It's all to easy to be put off doing something if some dour faced over cautious git on the tinterweb forums says your not experienced enough, it's dangerous, it'd be wreckless of you, blah blah blah.

It's also easy to say no too often. Recently I've been of a mind to say yes. Luckily for me Tom, the yorkshire chap I met up Meall a' Ghiubhias last Sunday was not one of these nay sayers. He was a quiet chap who listened attentively as I blethered on about all the mountains I had planned for the week. He even listened about how my old man would be fishing as I was walking the hills and all my usual bumph about my local hills and how these rocky ones were a new experience for me. That possibly I'd try some scrambling When I left him at the summit I simply said perhaps we'll meet again in the hills sometime. He smiled and nodded wisely.

The days passed. Monday I climbed Slioch, Tuesday (my easy day off) I dragged my poor Mum around Loch Kernsary at a fair speed, Wednesday I was up Beinn Airigh Charr. My week was going well although it was no epic adventure. After getting back into Poolewe from my Wednesday walk I was passing the shop and bumped into Tom who was carrying a lump of a backpack. We exchanged stories of our walks, he'd been out staying in Shenevall and had just walked back. That's miles away I thought! The quiet unassuming chap was actually quite the seasoned mountain man. After asking me what my plans for Thursday were he urged me to change them and do An Teallach. Yes, i thought. If Tom says I can do it then I will! Like I said, it's funny how the people we meet can influence us, it's good to say yes.

Thursday morning started with the sun shining bright through the curtains and a sore head. The beer I'd bought at the shop.

My old man was up already and had made bacon rolls.

They seemed to sort me out and it wasn't long before I was dropped off by dundonnel house. I set off up through the bushes and followed the burn up the hill. Cloud was shrouding the tops. The sun will burn it off, oh wait there was a wee glimpse. Christ look at those teeth! I'm not sure if it was the beer or seeing what I'd let myself in for but suddenly my bowels turned to water and I felt a bit peely wally.

I continued along my route and shortly I was feeling better. An eagle soared high above, the burn became a small stream and I was almost up glas meall liath. Teasing wee peeks at the peaks.

The summit of bidein a ghlas thuill was not far away and as I got to the trig point the cloud was all around me but not above. The sun beat down and I was roasting. A nice spot for some food and a wee drink of juice to celebrate number 10. I took a couple of pics as the patchy mist would allow and set off for sgurr fiona. It wasn't long before I was repeating the trick. Photos, food and juice on my eleventh. It was only then when the cloud cleared and I could fully see what lay ahead. 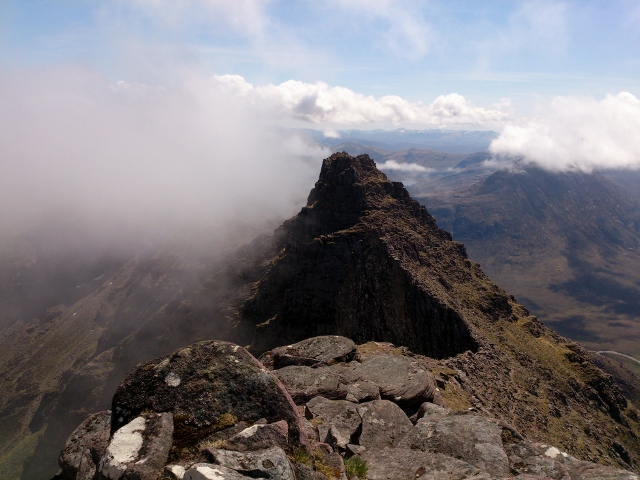 Ahead from Sgurr Fiona. Eek!

I've only done eleven I thought. I was shaking on sharp edge. But it was wet, I managed the cobbler. I've put it on bloody facebook! I'll have to do it!!!

So off I went. Up to lord berkleys seat. Feet dangling, no pipe, no mars bar but fruit pastilles did the job.

Then up corrag bhuidhe. This isn't too bad, I am doing it. Then I couldn't see an obvious way down. Oh ****. Suddenly my heart was in my mouth and I felt rough again.

I don't know if it was right, clever or even remotely like anything anyone has ever attempted but somehow I shimmy/slid/chimeny/bumped and jumped my way down. Phew. Bugger the rest I thought. I'll take the bypass path. Then when walking along it I met the first folk I seen. They were walking along the top, a party of 15 or from Ireland, and my pride stepped in. Back onto the ridge. It's fine, I like the climbing up bit. I'm doing it again.

I'm going for it. Oh wait, another down bit.

Not fun anymore. Back pressed against the rock and down another wee crack, bag bumping off the wall, feet wedged in cracks and hands clinging on. Before long it was over. A flash of sweaty palms and sick feeling mixed with elation and a gratitude for simply being alive. I was on cadha goblach and not a broken heap by loch toll an lochain. The rest of the way wasn't much fun but it wasn't any scary so that suited me fine. The boulders coming down sail laith were murder on the legs and the 4x4 track wasn't much better but I had just come off An Teallach with all of my mental and physical faculties intact. I was a very happy man!

For some daft reason I want to do it again.
So thats me, gonna be a yes man from now on! Cheers for the gentle encouragement Tom.

Well done yourself for taking on An Teallach, I have yet to go there , I was viewing it from Sgurr Mor on Saturday and it looked fantastic,

Yip thats it, sometimes you just have to go for it and find out for yourself what it's like rather than listening to the feardies

Good stuff meangarry, were you up that way for the week then?

and all my usual bumph about my local hills and how these rocky ones were a new experience for me.

Thats the same chat I have just now too

gmr82 wrote:Good stuff meangarry, were you up that way for the week then?

Yeah man, with the rents. Recently single and they took pity on me I think. Fantastic week and weather.

Cheers LS, JC and DM too. It's given me confidence and a renewed thirst for getting out there! (not that it was waning like!)

Well done Garry, this time it's you inspiring a Yorkshireman! I'll be in the area soon, hoping to climb An Teallach if conditions are good.

Pne I could climb again and again in circumstances are right