Set off from the Blughasary car park at 2.20am with the aim of getting some sunrise photos from high up on the hill. I had reckoned on my tried and trusted 2+ mph getting me to the mid point between Loch a Chiaiginn and its more westerly neighbour Loch Eadar dha Bheinn within an hour. That objective was easily attained with the help of the track that leads there and by the occasional glimpses through mist that I got of BMC's east top.

I then headed directly north across a half kilometre of relatively easy but tussocky, boggy and grassy ground and thereafter up some steeper ground that ends on a sort of escarpment or plateau that slopes gently upwards from east to west. The view west of BMC that should have opened up then was instead obscured by a swathe of low cloud. I headed through this, at the same time hitting the large, boulder strewn sandstone plinths at the east of the BMC ridge that extend over a couple of square kilometres. This made for very easy walking. Then, looming out of the mist, a sudden and striking view of BMC's eastern prow, Speicein Coinnich, with a procession of siblings lining the northward horizon.

It soon became clear that there was an inversion over Loch Broom with An Teallach, Ben Dearg and co. just now visible. This served to spur me on to get as high up the hillside before dawn as I could. In fact I probably got to about the 600m mark as the first brightening and reddening of sky appeared. From that height it was plain that the inversion in fact extended all along the visible seaboard -from Quinag in the north to Fisherfield in the south but probably mainly starting about five miles inland.

The east ridge has a good path that zig-zags its way up the tapering slope. The setting is quite spectacular -great views all around to Suilven, Cul Mor, Cul Beag, Loch Broom, An Teallach...
The ridge joins onto a large summit plateau and I included a detour to a couple of the north facing cliffs that give good views of Stac Pollaidh.

The central plateau of BMC is about three quarters of a kilometre wide at its widest and a kilometre east to west. Once I reached the west end of the plateau I could see the west top, Garbh Choireachan, and its east ridge. This looked a fair way off, perhaps because the sun was up now and I was feeling warm. It would only have been about 6.30am though.

There is some nice easy scrambling on the continuation west and I included a bit of this before doubling back. 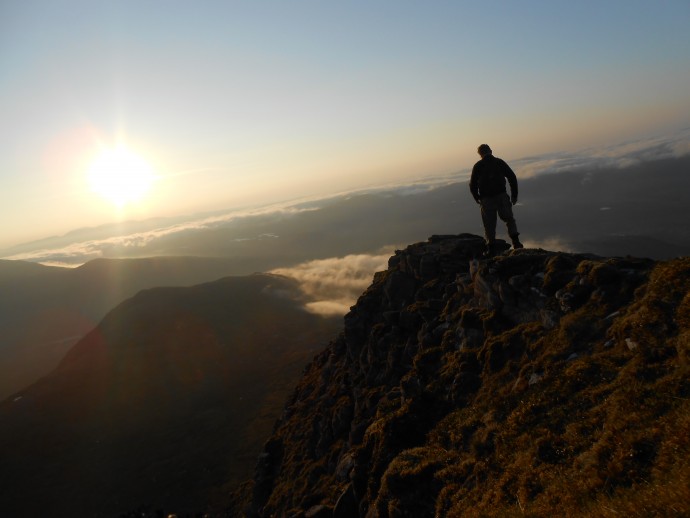 squinting at the sun from the top of Speicein Coinnich the east from the west end of the west end

Cracking inversion, and worth the early start. We witnessed some incredible sea fog inversions (if that's the correct term) up there a couple of weeks ago.

Avocetboy wrote:Cracking inversion, and worth the early start. We witnessed some incredible sea fog inversions (if that's the correct term) up there a couple of weeks ago.

It was a pleasant surprise. The mwis forecast wasn't predicting any inversion for that day as far as I recall (though it had for the day before) or maybe they hadn't got round to putting in their usual "some summits above cloud" hint to that effect. I was also pleasantly surprised by my timing. Been up there a few times and all have been memorable -a great hill.

Thank you. That was my fifth visit I think, different every time but always a great one for the camera.