Yet again I’m late with my report

Still I can think of worse things to do on a wet miserable Saturday than sitting in my lounge looking back at my walking last weekend.

Glen Affric, thought by many to be amongst the most beautiful Glens in Scotland, was to be my destination

This had been a long time coming, so I was pretty excited to say the least

I’d been on the inter-web to source a suitable campsite and walkhighlands had pointed me in the direction of Cannich Camping and Caravan Park.

Just a word about the campsite. Superb

£7 per person a night, well maintained, cracking woodland setting and the full breakfast at the Bog Cotton Café

What more could you ask. I will be back

Anyhoo, let’s get back to walking

Arriving late Friday afternoon and it was wall to wall sun and the promise of more to come over the weekend. I had toyed with the idea of a quick walk up a local Corbett (Sgurr na Diollaid), but decided on a few beers instead

In retrospect a good call

And not because of the beers

The next good call was made early doors on Saturday morning. Clear skies had been replaced with clag and although it was almost certain to clear I’d heard rumours of the risk of isolated thunderstorms later in the afternoon. Had the forecast been perfect I’d have gone for a long day, doing the middle three Glen Affric Munros of Mam Sodhail, Carn Eige and Beinn Fhionnlaidh. If I still had any feet left I’d then add on Tom a’Choinnich and Toll Creagach. The thunderstorm threat was enough to revise plans and just do the less testing easterly two of Tom a’Choinnich and Toll Creagach.

Initially, with the clag persisting (my Met office app suggested I should be bathed in full sun at this point, whereas my eyes confirmed I wasn’t) I was a bit downhearted as I started off along the stalkers path from Chisholme Bridge. A great path, although I imagine it could be a considerable bog-fest in wetter conditions. The one up-side to this stage of the walk was a super waterfall flowing off the Abhainn Gleann nam Fiadh. Took the short detour and stopped there for a few moments 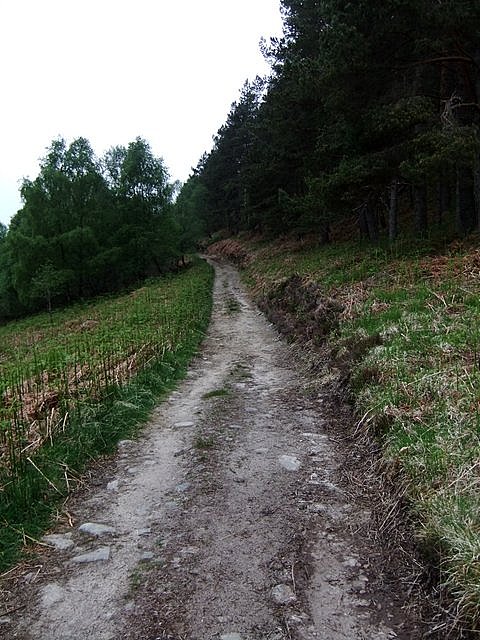 Start of the path from Chisholme Bridge 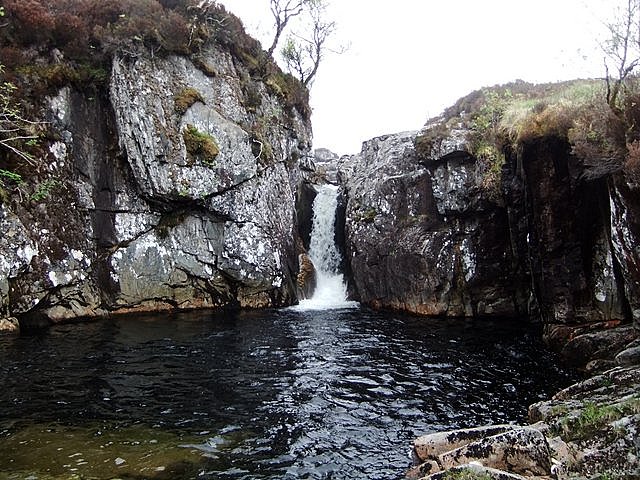 Stunning little waterfall on the walk in

Eventually the sun looked like it might finally win through, but initially the clag was winning the day. Then, as I was almost at the junction where my path would head off to the right up* beside the Allt Toll Easa and on to the Bealach Toll Easa it was as if someone had flicked a switch. Within what seemed like a matter of minutes the clag around me simply dissolved and the views that had so far been lacking were there in all their glory 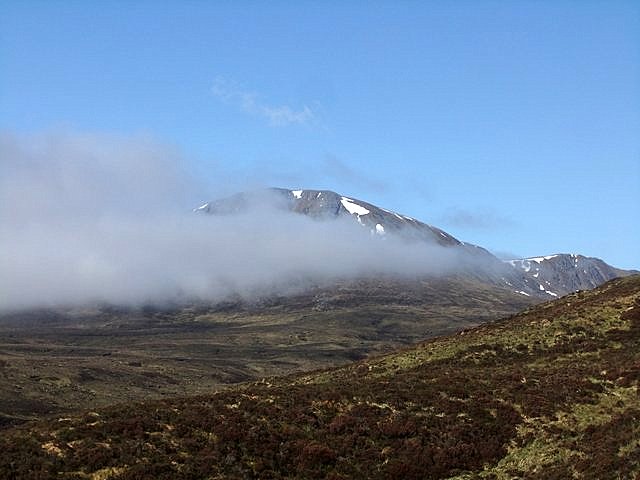 And to be fair it wasn’t necessarily that evident in amongst the heather. We had a good chat as we both headed up beside the burn. It was to be a brief encounter though as he was planning to do the hills anti-clockwise and I was planning to enjoy the delights of Tom a’Choinnich’s curving west ridge up on to Creag na h-Inghinn and then on to the summit 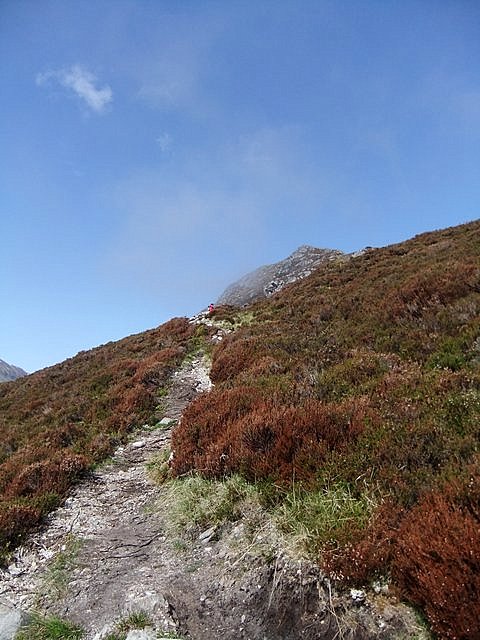 The path up onto the Bealach Toll Easa 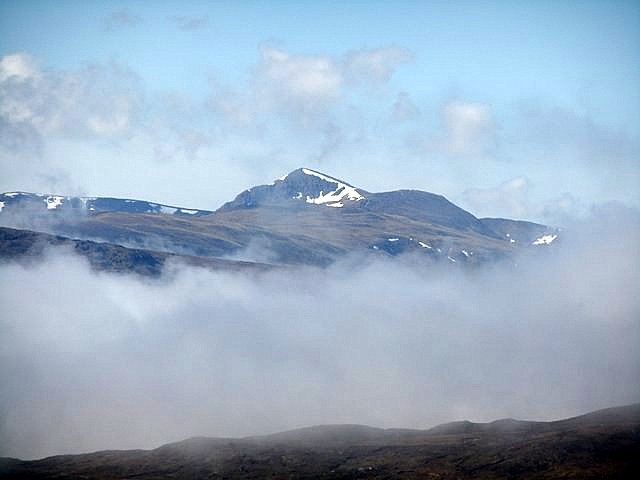 This was when I first realised how the early morning clag had done me a huge favour. From below the ridge had somehow managed to look both relatively straightforward and appreciably steep at the same time. And both suggestions turned out to be true. It is steep(ish), but never overly so. And it is straightforward, with a great path easing the way all the way up 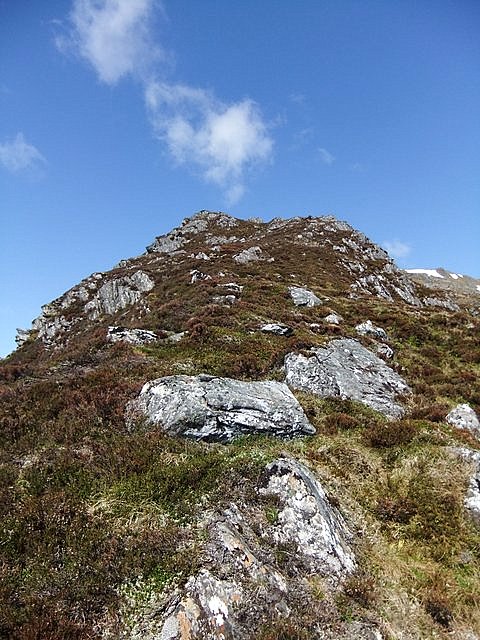 The west ridge route up onto Tom a'Choinich

Great views all round, with the non-Munro-Sgorr-na-Lapaich, Mam Sodhail and others opening up nicely

The view back down the Glen toward the car weren’t shabby either. The ridge was looking impressive and continued to be so to

Eventually, as height was gained I was treated to a sneaky peak toward the north Mullardoch Munros 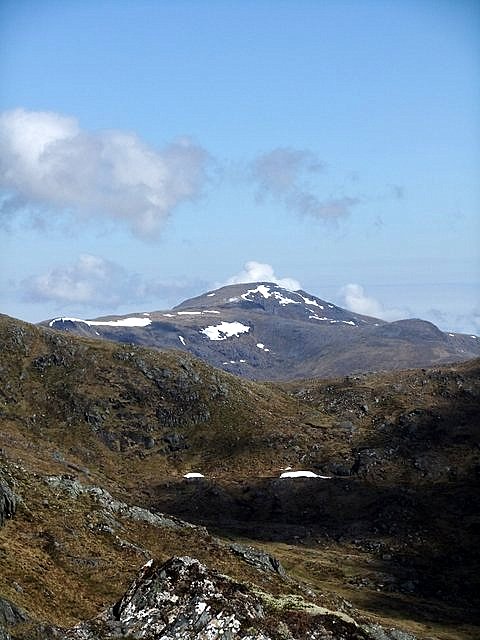 After the initial climb most of the height is gained. It’s then an easy, gentle stroll to the summit. I chose to stick with the path that hugs the cliff edge, with views across to Toll Creagach. Although probably considered to be the least interesting of the hills in the area I still didn’t think it was a bad view all the same. 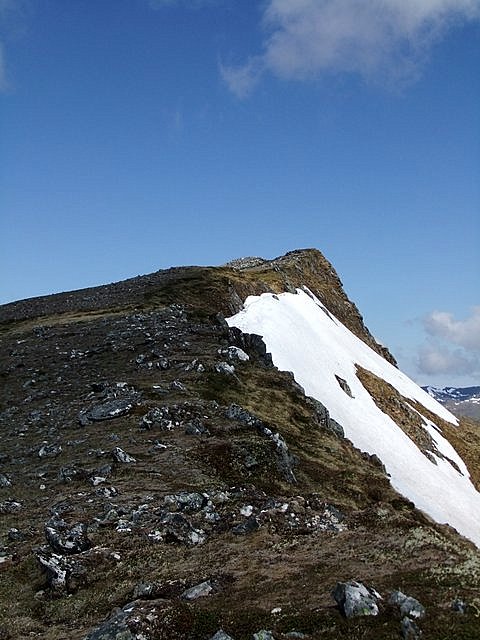 The more gentle part of the ridge up to the summit 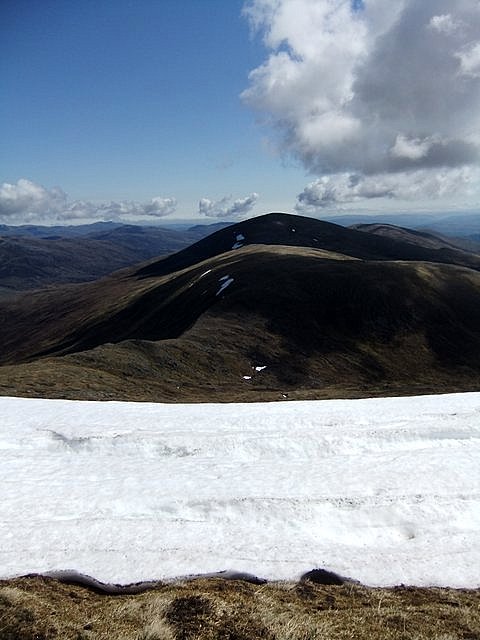 Munro #2 of the day had to be ignored though, when compared to the delights to me left

There were great views across to the other Affric Munros of Mam Sodhail, Carn Eige and Beinn Fhionnlaidh, as well as beyond. Mullach Fraoch-choire in Kintail looked impressive too 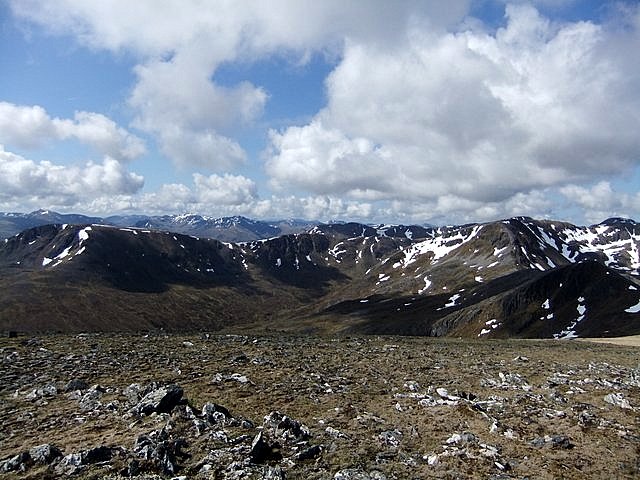 View west down the Affric Munros

Oh yeah, then there was the north Mullardoch Munros as well as Strathfarrar 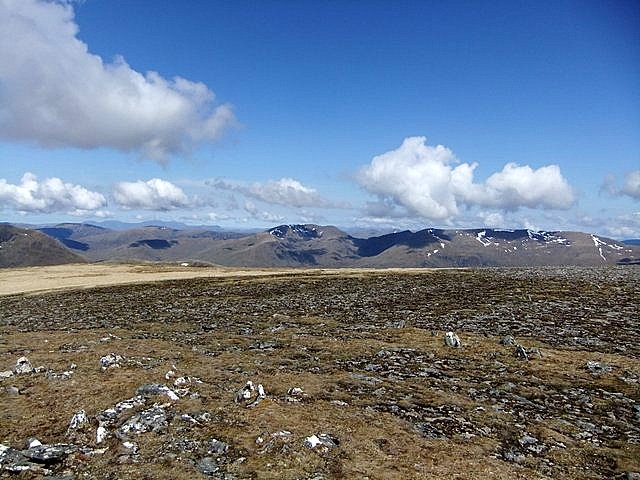 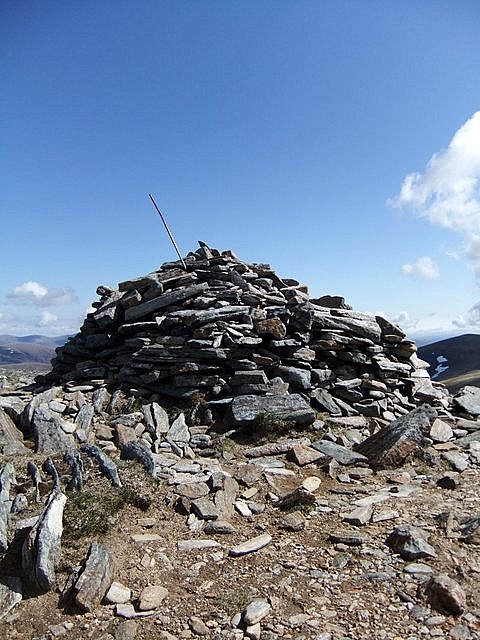 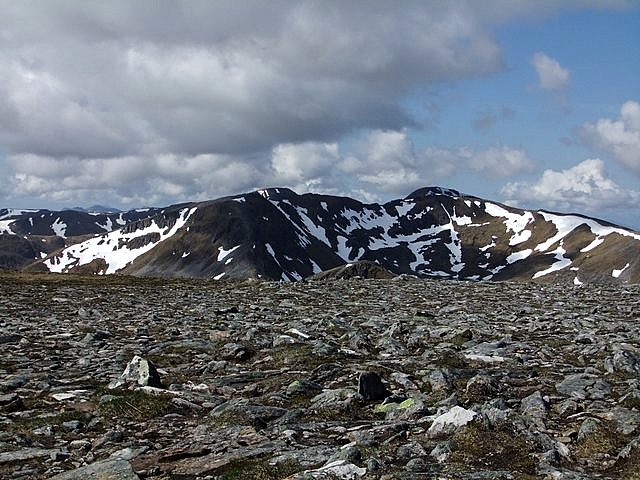 View toward Carn Eige and Kintail 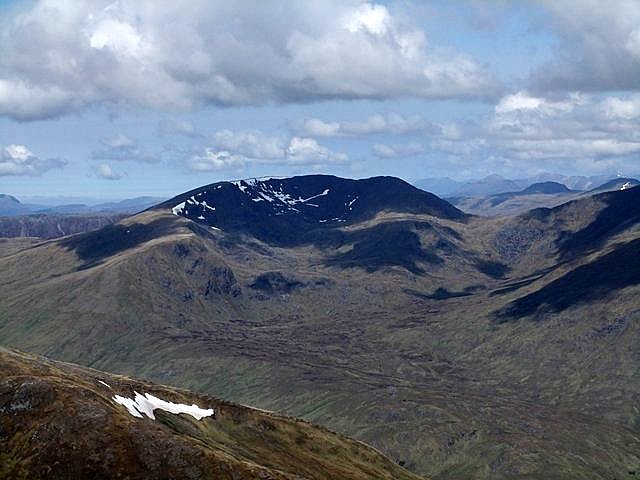 And I had this all to myself

Although happy to be doing just the two Munros now I could see why the full circuit of all 12 Munros around Mullardoch is so highly prized by many. Especially in weather like this. It really is a place where you just want to sit and soak it all in for as long as possible

Eventually I was joined on the summit by another chap who had taken the same route as me. After a brief chat I left him at the summit to enjoy the same solitude as I had.

The descent off Tom a’Choinnich was excellent fun

Hands were needed in places, but it was never difficult. There’s even a by-pass path for the worst of it, but that would just be missing the point 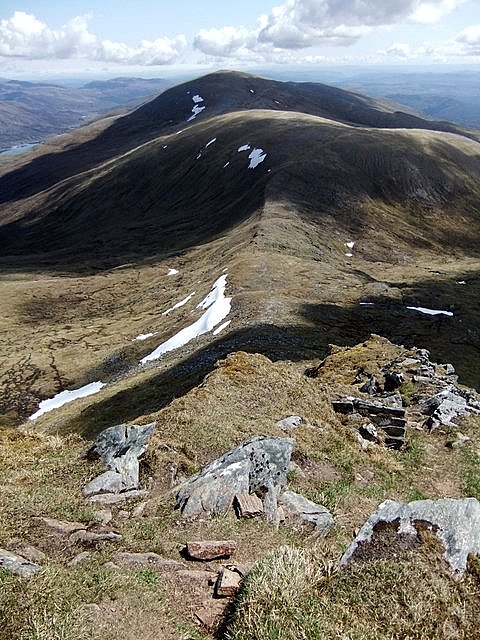 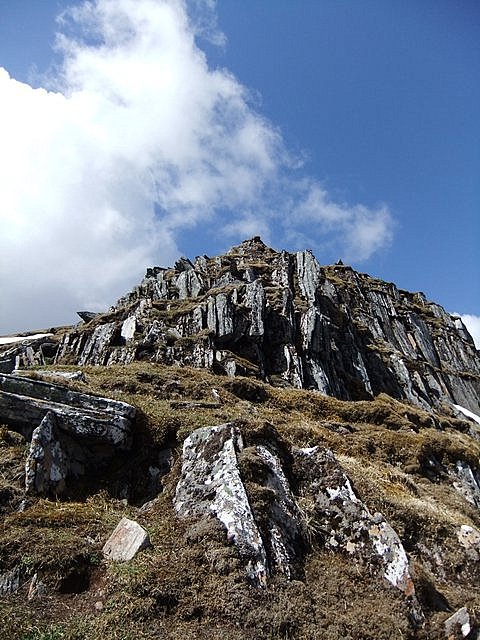 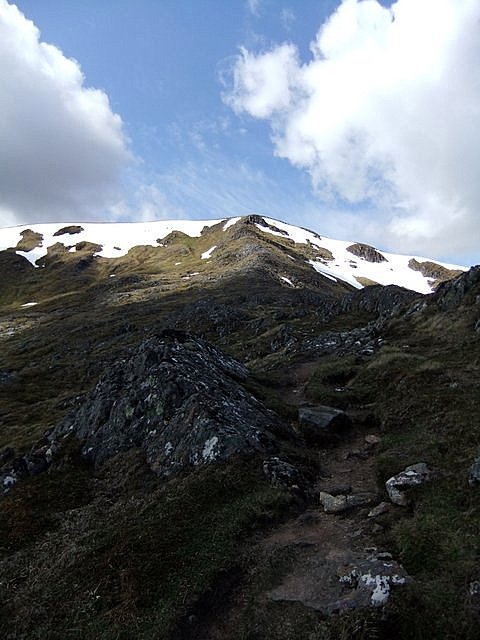 View back to Tom a'Choinich 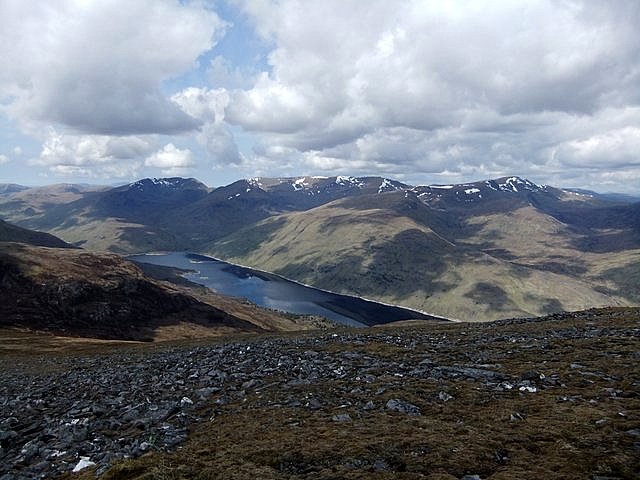 He suggested I take a faint path to the left of the lump that is point 951 in order to avoid some boggy ground. I duly obliged. All easy walking over short grass and then the final pull on to Toll Creagach’s summit.

Ok, so not the most exciting hill, but it surely can’t be argued that the views are still superb. Nice view back to Tom a’Choinnich, as well as down Loch Mullardoch

Further afield the Ben was in view, as well as the hills of the Grey Corries, Easains and others.

North-west and Beinn Eighe and Liathach were also visible in the haze.

But the prize for me, albeit hazy, was the beast that is An Teallach 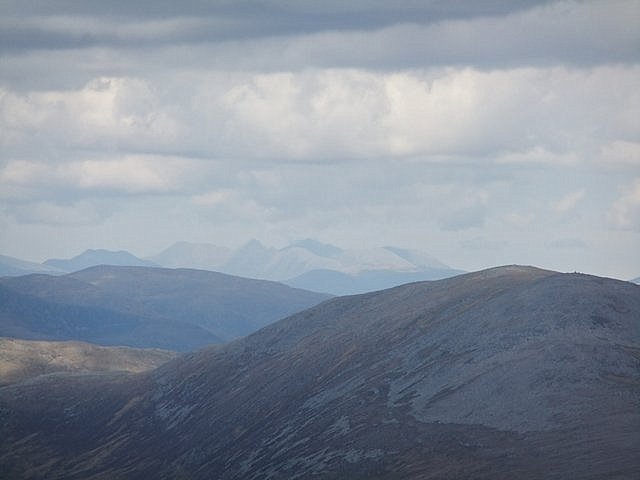 A hazy An Teallach 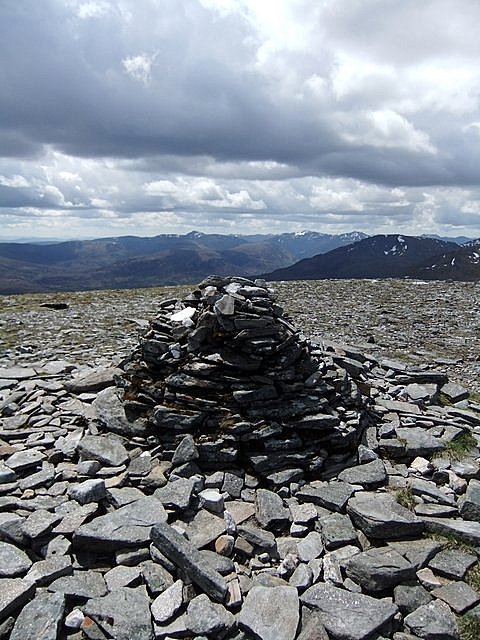 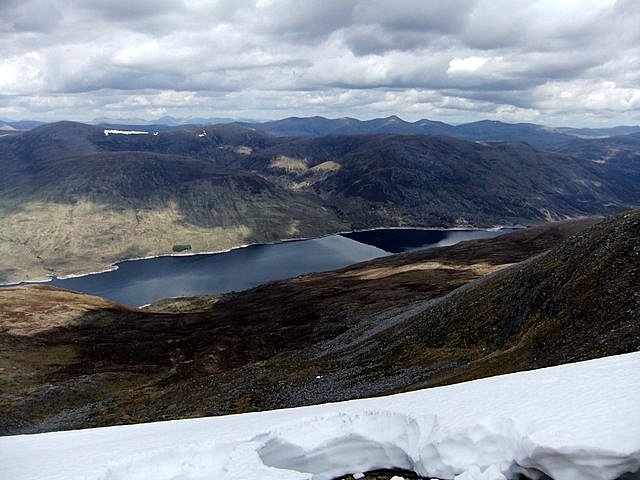 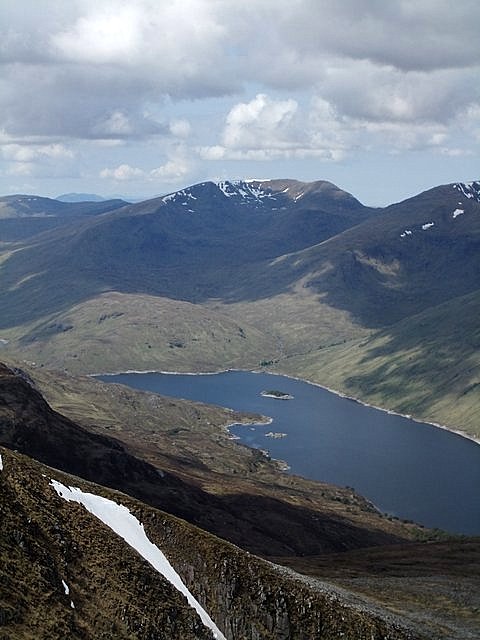 Rather than simply drop straight off the hill and pick up the stalkers path from the route in I decided to mix things up a little. From the summit the view toward Mullardoch dam and Loch Sealbhanach were pretty special so, after a quick review of the map, I decided to head down the north east ridge a short distance to get a better look. 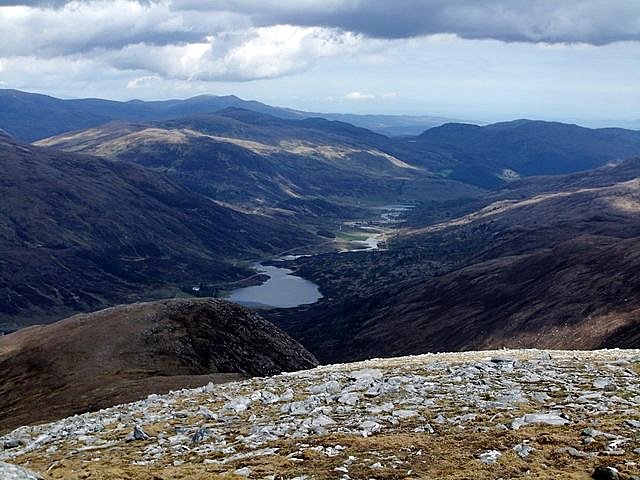 Loch Sealbhanach and into Glen Cannich

I then swung back round and dropped down a gentle slope in the general direction of point 789. 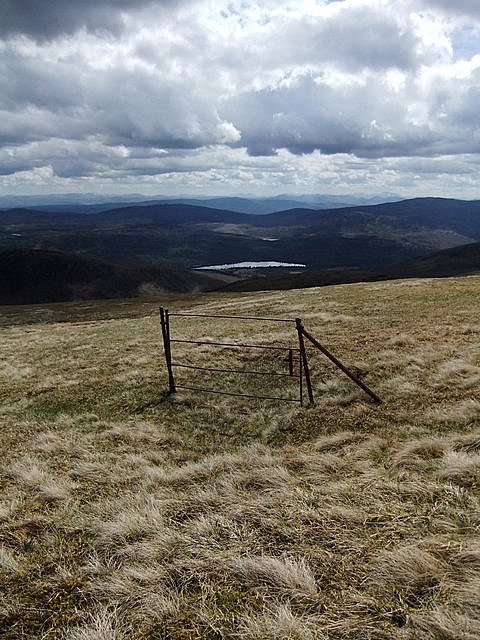 Don't forget to shut the gate!

At the saddle between that and Toll Creagach I took a line close to the Allt Coire an t-Sneachda basically straight toward Beinn a’Mheadhoin. This would then drop me near a landrover track that connected back with the main stalkers path back to the car. Some nice landowner had erected a deer fence around the lower reaches of the Allt, which necessitated a slight detour before picking up the landrover track. Once back on the stalkers path it was an easy walk back to the car for the short journey back to the campsite, this time with the views (now behind me) of Tom a’Choinich I had missed earlier in the day. So, that was my first venture into Glen Affric. A simply stunning place to visit

All in all I was happy to only have done just the two Munros, as the west ridge of Tom a’Choinich would have been missed otherwise. Now I can’t wait to return to pick off those middle three

Nice one Pete, love the vibes on the vid

Frigate wrote:Nice one Pete, love the vibes on the vid

Cheers Frigate. It was certainly a great weekend to be out on the hills last weekend

And Glen Affric is certainly a stunning area too

Wow Peter what a report!

Without being cheeky, have you started using a different camera because your photos are definitely getting better and better!!!!

Without being cheeky, have you started using a different camera because your photos are definitely getting better and better!!!!

Thanks polly. Glen Affric is a cracking area

Not sure why it took me so long to visit

The camera is my same old point and click device. Served me well for two or three years now, although it's showing signs of wear and tear. I must just be getting better at taking photos

Oh, and a bit of jiggery-pokery via Picasa helps perhaps

(well sharpening them up slightly, that's all)

You seem to have been lucky with the weather recently, Pete.
Enjoyed the report and looking at those wonderful views

We're staying in Glen Affric at the beginning of October; so looking forward to it

SusieThePensioner wrote:You seem to have been lucky with the weather recently, Pete.
Enjoyed the report and looking at those wonderful views

We're staying in Glen Affric at the beginning of October; so looking forward to it

Thanks Susie. Very lucky with the weather

Especially this weekend, which was a real bonus. I hope you get some great weather when you are up too. October can be a great month in my experience, so I'll have everything crossed for you.

Still got these two to do so good to see there's a bit of fun to be had on them. Good day you got.

Johnny Corbett wrote:Still got these two to do so good to see there's a bit of fun to be had on them. Good day you got.

Thanks JC. I certainly enjoyed this walk. They're definitely a good couple of hills, for the supposedly two least interesting of the hills in the area.