Well, apparently the views from the top of this marshy, peaty lump are worth the climb.

Sadly, an early start on Saturday couldn't get me on the hill early enough to find out. With a faint series of paths up the shoulder meaning I was off track from almost the start of the ascent - the suggested cairn to indicate where the climbers' path diverges from the farmer's track was overgrown and easily missed - by the time I hit the cloud base at around 600m I was already contouring around the ridge in an attempt to find the path that I was convinced I must have overshot.

Indeed I had overshot it, but to be honest it didn't make much difference. The hillside was so boggy that the track regularly disappeared and was waterlogged almost all the way to the summit when it could be found.

Working on bearings I deviated slightly to the north of the true ridge and had to scramble up between some of the rocky faces, but these were fairly simple. As the wind picked up and rain began falling out came the waterproofs and the mantra "tea at the top" started working through my brain.

By the time I hit the summit the wind was bringing the rain down at 45 degrees, and the welcome sight of what is, to be fair, one of the better constructed summit shelters gave me chance to take my only two pictures of the day.

The return descent was fast due to the profile of the ridge, although again the sheer thickness of the clag and faintness of the path meant I deviated slightly, but not enough to cause serious problems.

Soaked through but satisfied I hit the road, glad that I over think my preparation and always have a dry set of clothes waiting at the car! 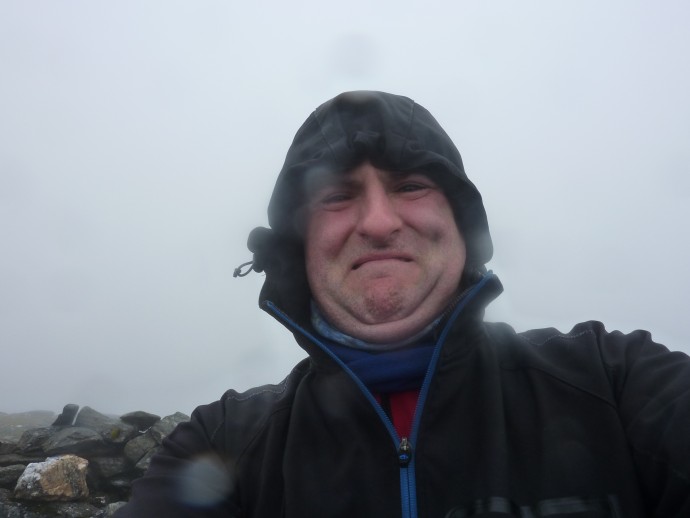