Okay there were no barnacles on this walk, but there WERE two nice fat blisters on each of my heels (courtesy of a triple Munro bag and new boots combo from a few days earlier) but as the pesky blisters were both encased in the loving embrace of Mr Compeed (Boots' cheaper version) all was reasonably well.

This was the last day in the Highlands for a couple of months and so we wanted to go out on a good one. Sun was shining, dry underfoot, car parked at the surprisingly full Glen Feshie car park, loads more cars than last time (but it was the weekend and no doubt lots of people keen to make the most of the day).

We've walked Glen Feshie before in the Winter, so great to see it in Spring but the cherry on the cake was that the new path that was in the process of being constructed last time we walked here was now complete. A really good path and helped to put a jaunty spring in our step as we strode out for Mullach Clach a Bhlair. The new path, looking back towards Achean

The left turn opposite Feshie Lodge was the start of a very long climb with no respite and the path always stretching away clearly ahead of us. Hubs on the never ending path

As with all climbs though, the views got better and better as we gained altitude and stopping to take in the views of Glen Feshie was a good excuse for a little breather every now and then. The view (just below the snow line) down into Coire Garbhlach was the bomb and we spent a few minutes here taking in the dramatic coire. Looking down into Coire Garbhlach Once at the (patchy) snow line it was fairly straightforward to reach the summit cairn, which was in all honesty a little pathetic....but you don't climb mountains to gaze at the summit cairns and the views in all directions were far reaching, fabulous and well worth every painful step of my blistered heels. Posed for the mandatory piccies and then scooted off down the north east side for some rocky shelter as the wind had picked up somewhat and we wanted to eat our lunch without having to battle with the wind. We're fussy like that The (not so mighty) summit cairn, Mullach Clach a Bhlair. Pointy peak of Sgor Gaoith to the left of me Good views of the distinctive pointy peak of Sgor Gaoith and we did not extend the walk to include that peak as we'd bagged it previously, so we continued with our lunch feeling slightly smug.

Descended via the Druim nam Bo ridge (the Hubs' idea). Very pleasant wide ridge, slightly rocky underfoot which didn't help with my blisters which were by now giving me a bit of gyp. Skirted around the edge of Lochan nam Bo and followed the rather indistinct path into the increasingly boggy lower slopes. The descent into Glen Feshie 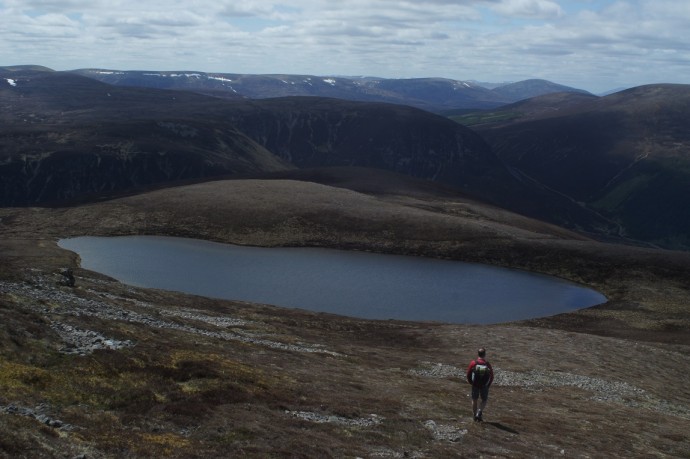 Given that my footing and balance were a bit out of kilter (with the painful blisters) I somehow managed to end up knee deep in a very boggy bog. My left leg took the brunt of it, my right leg only went ankle deep.
This made me grumpy.

My grumpiness took a turn for the worse when I slipped in a stream lower down (still, it washed a bit of the bog off my boots).

We reached the point where we'd taken the left fork upwards earlier on in the day and found a stack of timber right next to the sad remains of the old Feshie Bridge, so it looks hopeful that by our next visit (which shouldn't be too long) a new spanky bridge will be in place. Rested on the timber, patched up my hooves and posed on the very rickety old bridge before returning back along the nice path and eventually reaching the car. Another good walk an definitely a good one to end our break on. Grimacing on the final trek back to the car. The blisters (in a delightful bog water marinade) were PRETTY painful at this stage Fording the final stream. I wasn't so light on my fett.

That looks like a good walk, nice and easy on that path, great views.
Shame about the blisters

Enjoyed that, I`m very fond of this area. Nice photos! Still to do this one - my last Munro in the main Cairngorm Massif.
Hope your feet have recovered!

Thanks both, yup the feet look less Hobbit-like now and the blisters are all but gone. Iain, I think it'll be a fair few years before we can say that we're on our last Cairngorm (Massif). Way to go you

. Hope Mullach Clach a Bhlair is a good one to go out on