Grahams included on this walk: Beinn a' Chaolais, Beinn Shiantaidh


Anyone that's been to Jura will tell you that it's not the easiest place to get to. Two ferries and a lot of driving before you can unpack the rucsac means you need to be prepared to spend some time travelling if you want to achieve your goal. The thing about this round is there are three things I believe are essential before you start. Determination, hill fitness and some luck with the weather.

Our trip began in Fife with a stop off in Balloch to pick me up in the van. We then drove to Kennacraig to catch the 1330 ferry to Islay, where we suffered a temporary panic when the ferryman told us we hadn't booked and maybe wouldn't get home on Saturday. (Reminder to book the ferries next time). However, panic over, as they could fit us in on Saturday afternoon and we continued on our journey. The ferry takes two hours and it was very pleasant but the weather still looked iffy. We knew the weekend looked grim weather wise however we were convinced that Friday would bring us a good day. On the way, contemplating the days ahead

Landing at Port Askaig we were incredibly lucky when the ferryman waved us onto the Feolin ferry, closed the gate behind us and took off to Jura where we were deposited about ten minutes later. From here it is a slow drive, eight mile to Craighouse where exiting the van we were overcome by whiskey fumes from the fabulous Jura distillery. We decided that we would park the van at the end of the south pier as there are some very handy toilets and it wasn't too far from the campsite where one of us would be sleeping. (note the campsite is closed until later this year due to the toilets out of action but you can still camp there free of charge). We pitched the one tent we were using and then headed for the Jura Hotel where we enjoyed the food, at good prices and the beer of course, at equally good prices, before heading back to the van for a nightcap or two. It was here we were joined by a local cat that thought it would be good to keep us company. We named it Balvenie, not in keeping with the local whiskey's, but it was what we were drinking at the time. The next morning we were delighted to have that slice of luck as the weather was as expected. So we packed our gear and headed for the start of the walk. Our start was the three arch bridge over the Corran river where there is plenty of parking space. The walk up to Loch an t-Siob is fine if you stay high. There is a path and as it had been so dry the path wasn't too boggy. However, if it had been raining I guess the path would be awful. When we got to the loch we crossed the obvious stepping stones and headed up the SE ridge of Beinn Shiantaidh. It's pretty steep and a bit of a slog over granite blocks and scree but we were soon standing on the summit delighted with the all round panorama. Heading down the west ridge is slow due to the granite blocks and unclear paths but when at the beallach the route up the Corbett is simple. There is a gradual grassy ramp all the way up the east face to the ridge of Beinn an Oir, and turning back on yourself and walking SW you are soon at the highest of the three Paps. The views from here are extensive but the most noticeable thing is the fearsome face of the third Pap. We couldn't imagine how it was going to be possible to climb that face. We pondered it for a while before deciding on our route. On top of the Corbett facing the third Pap

After lunch we headed down the south ridge, very carefully as its steep and loose. It took us a lot longer than expected to descend to the next beallach. I think it would be treacherous and extremely dangerous to do this in wet conditions. And good route finding is essential as there are some very tricky sections on loose rock and scree. At the bottom however the path up Beinn a Chaolais was obvious. It looked very steep but was well defined. We started up and after much puffing and panting along with the inevitable one step forward two steps back, we were at the summit much easier and quicker than expected. This was where we had the best of the day. Fabulous views and lovely warm sun. We truly were rewarded for our efforts. We could see Islay, Colonsay, Mull and Arran. Not to mention the tip of Northern Ireland. Numbers one and two from three 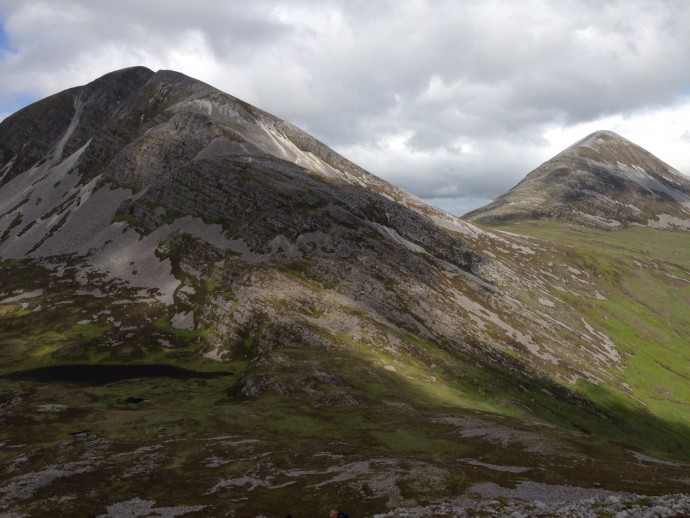 Numbers one and two from the route up three

The route down was a reverse of the ascent until reaching the beallach after which we took a direct line for the head of Loch an t-Siob. It was on the way to the loch we had a rare treat when a male Hen Harrier flew up from the grass and soared above us. The route to the loch was hummocky and boggy but it saved a bit of time and we were able to pick up a path on the south side of the loch taking us back to the van. At this point our thoughts of a refreshing dip in the Corran River were quickly dispersed by the attack of the midges. So we headed back to the pier and the handy toilet for a wash. We were then back at the Jura Hotel toasting our success and an unforgettable day out.

Next day, once organised it was back to the Feolin ferry and to Islay where we visited some of the sights. In particular the sleepy Port Charlotte which now seems to be a community of holiday cottages, and Bowmore where we had some lunch and visited the distillery. Back on the ferry we were sad to leave Islay, but as expected the weather had turned, so we were looking forward to getting home to a bath and putting our feet up.

This was as good a day out as you will get, filled with some of the most beautiful scenery in Scotland. It really is a must for those looking to experience a real classic. There is no doubt you need some luck with the weather though and take your time as if you don't live on Jura, I imagine you won't visit here very often.

One last thought, for a place called Deer Island, we didn't see many deer.

Re: The Paps of Jura

That was grand and a window in the weather

Re: The Paps of Jura