We had spotted Beinn Bheula from the top of Beinn an Lochain the previous weekend and thought we’d give it a go. We parked in Lettermay (NS187001) and went through the nearby gate onto a farm track which soon petered out. We followed the edge of the forest until we came to the Lettermay Burn where another gate allowed us into the trees. This section would be very boggy if the ground was not frozen. We soon came upon a forestry track which we followed until it turned sharp left. Here we plunged into trees, trying to stick as close to the banks of the burn as possible. It was hard going, pushing through low branches and climbing over fallen trees. There was a path beside the burn but fallen trees meant that we had to keep going deeper into the forest to get round them. After what seemed like ages we finally broke out of the woods – at a road with a wooden bridge across the burn which wasn’t shown on our map as we don’t have the most up to date version. A small plaque on the bridge announced that this was part of the Cowal Way. So you won’t have to bushwhack through the trees like we did, you can just walk up the Cowal Way from Lettermay (see route on this very website). and up to the bealach between Beinn Bheula and Beinn Lochain. Here we branched off and climbed the ridge up past small crags to a snow filled corrie. It became quite icy higher up and I felt the need for crampons for a short stretch. we carried on along the ridge to Creag Sgoilte. We had great views of the Arrochar hills for most of the day as well as seeing deer and a fox, quite close to the summit. From there we made for Cnoc na Tricriche, passing the remains of a crashed plane along the way. It is listed on http://www.aircrashsites-scotland.co.uk" rel="nofollow as a Grumman Martlet that went down in 1940. At this point there is the possibility of a descent to Lochain nan Cnaimh 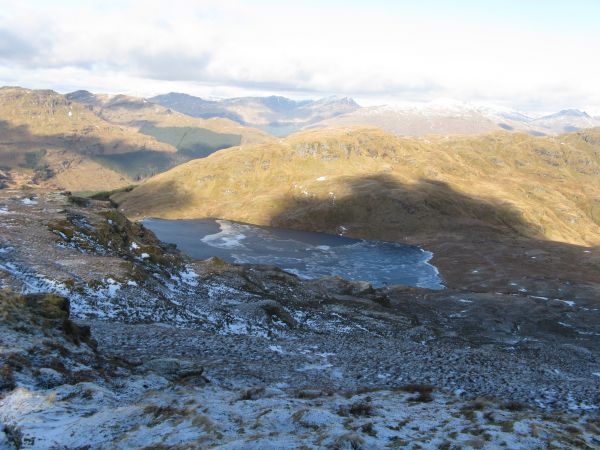 but it was still quite early so we carried on. The ridge descended in waves to meet a track at NS186963. Lower down we could see Carrick Castle on the lochside. We dropped down to a lower track and then to the road at Guilimuich. It was quite a pleasant walk back along the road back to the start and an opportunity for a bit of birdwatching with sightings of oystercatchers, a heron and a curlew.

There is a bus which runs from Carrick Castle to Helensburgh so you can take that if you don’t fancy the walk along the road.
This is a map of our route.

Wow the climb out of the corrie looks a bit scary on ice! Looks a good walk tho...

The Corrie was well and truly iced up on Wed 10 th Feb and needed crampons and axe from bottom of it.