An Ample Sting in Stuc a Chroin's Tail

An Ample Sting in Stuc a Chroin's Tail


I’m a bit out of synch with this one, having done it over three weeks ago.

My daughter was up for the weekend and it was time for another Dad and daughter summit photo, preferably one with a better view than the previous one on The Merrick where the promised panoramas stretched all of five yards from the cairn – in all directions.

Stuc a Chroin remained unticked - an omission since doing Ben Vorlich a few years ago and deciding against extending the day – and the Corbett Beinn Each seemed a good pairing for what we hoped would be a straightforward and relatively short trip. We had to “do” Edinburgh the next day so needed to be tourist-fit for that as well. 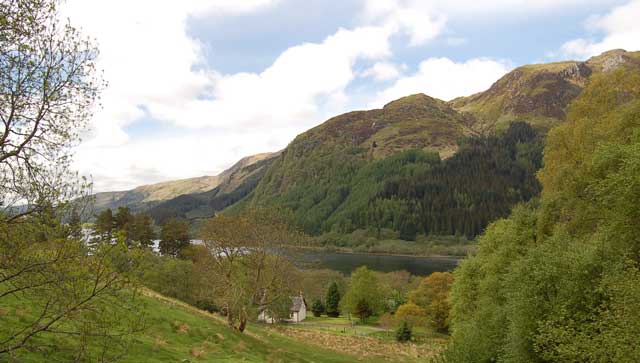 As the woodland track rose steeply and wended its way through the trees to the wider track above, Loch Lubnaig and the layby at Ardchullarie were soon left behind. We emerged from the trees and shortly arrived at the finger post indicating the way up to Beinn Each. 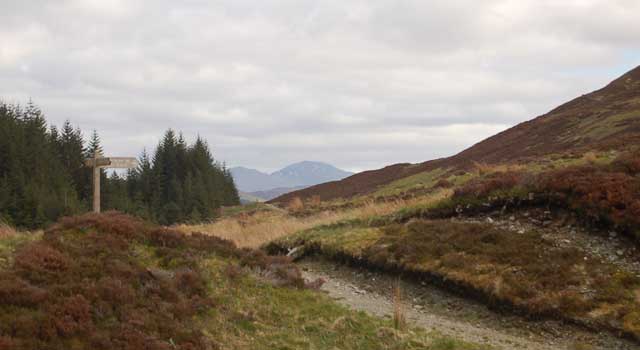 Simple - "this way up" - with Ben Lawers in the distance 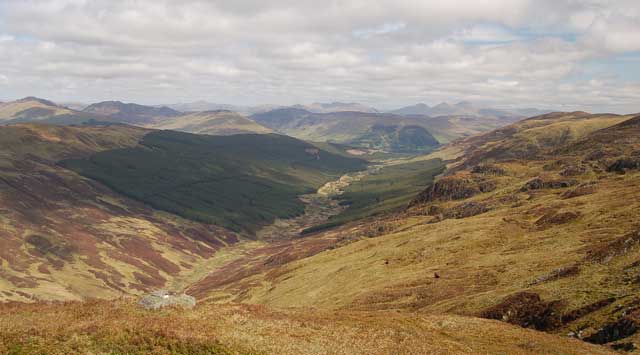 Down Glen Ample from the slopes of Beinn Each

Looking at the map beforehand, I’d hoped for one of those tops you’d be able to see from a distance, to be fully aware of what lay ahead and what was to be achieved. I didn’t really want us to maintain an optimistic hope that the next skyline would give blessed relief, only to be disappointed with each successive false summit.

Instead, the cairn on Beinn Each resolutely hid behind the receding horizon above until the very last moment.

We were, however, given a glimpse of the next objective, Stuc a Chroin, well before the Corbett revealed itself.

What did greet us on top was the debris of a previous visitation: piles of plastic water bottles and polythene wrappers scattered around. Marker canes, many with red and white tape still flapping in the breeze, had lead us up the final hundred metres or so, and detracted from any sense of achievement at reaching the top. The left-overs of a race or endurance event? No clue. But sun-faded labels on the bottles made us doubt their freshness for slaking our thirst. 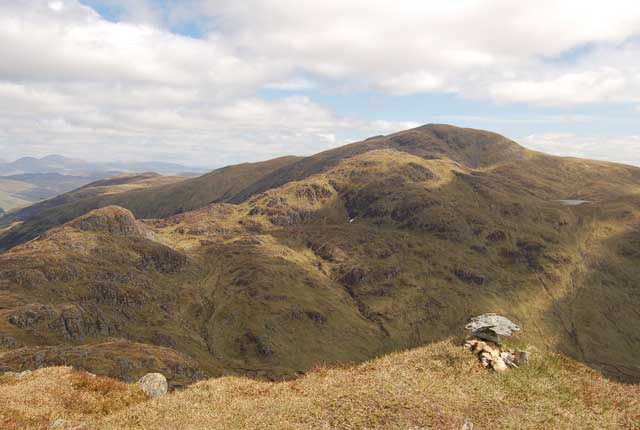 Once our backs had been turned on the litter, the extent of the view could be enjoyed. It gradually became clear that we could see from one side to the country to the other. To the south east the pencil-sized Wallace Monument pierced the landscape, and beyond, the upper reaches of the Firth of Forth caught the sun. Meanwhile, in the north west, the last of the snows still clung to the Ben. 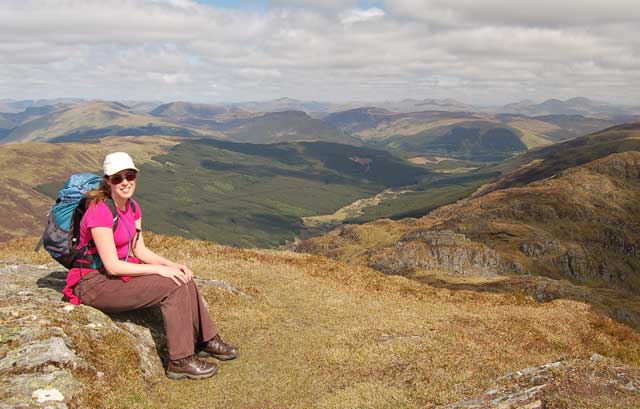 One down: one to go - Glen Ample and the north west from Beinn Each

Then it was time for the twists, turns and rollercoaster connection between Beinn Each and Stuc a Chroin. Wending our way across Creag Chroisg, a cairn on the summit ahead remained in view for quite some time, as did the fence posts we followed through the ins and outs of the route. 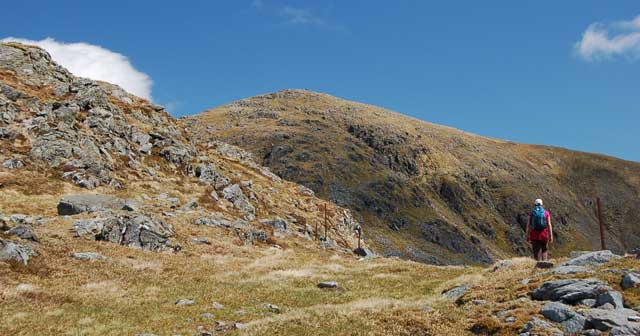 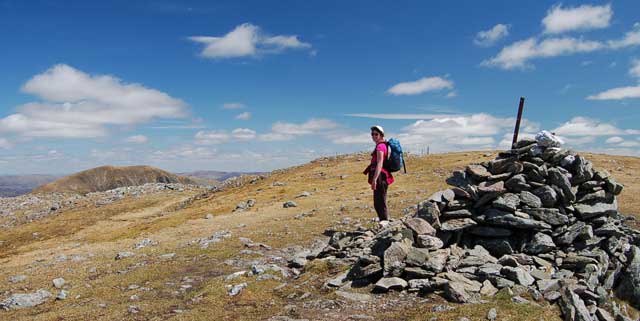 Stuc a Chroin was like Beinn Each, but better, with the added value of the view to Ben Vorlich across the gulf between. In addition, the spectacular scope of shore to shore views was emphasised further. Now, we were sure that Goat Fell on Arran could be seen in the haze to the south west.

Despite an MWIS prediction of 30% for the West Highlands that day, we could see them all.

Not having had to share Beinn Each with anyone else, by contrast we were now witness to the continuous stream passing between Ben Vorlich and Stuc a Chroin. Matchstick figures bristled along the crest of the Munro beyond and continued like an ant trail between the two. 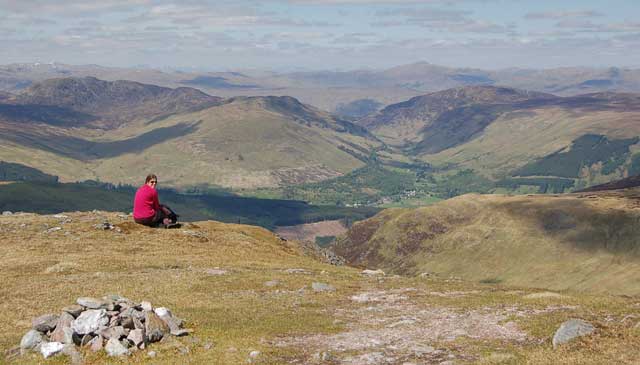 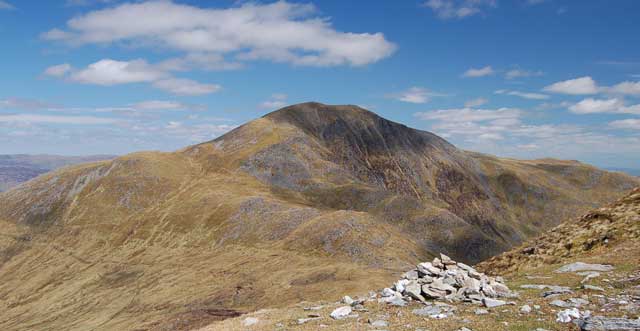 Avoiding the crowds, and needing to head back towards Loch Lubnaig rather heading off to Ben Vorlich, we followed the broad shoulder north west towards Craig Dbubh, then struck south west into the bowl of Coire Chroisg.

Once in the bowl and by the burn, but with the forestry blocking the direct route down, we countoured round above the trees, on a sketchy trail just a few yards above the deer fence. It came, it went, it disappeared and reappeared and once the trees had been left behind, out of frustration we just dropped directly to the track in Glen Ample that would lead back to Ardchullarie.

And therein lay the sting of the day.

Legs tiring, and with water running out, we faced the pull up to the watershed before being able to enjoy gravity helping us down hill to the car. It wasn’t that it was steep, but neither was the gradient shallow enough to make it an amply easy amble up the Ample. It was just that extra handful of kilometres at the end of the day that we could have done without: a longer day than I’d expected.

The last dispiriting slog - the upper reaches of Glen Ample

In the end, we both knew that the feeling of aching legs and sore feet would pass. The memory of the views would linger far longer, a fact borne out as I write this trip report and pore over the photographs more than three weeks later.

I’m glad we didn’t extend the day and push on to Ben Vorlich: that would have made it a day endured rather than enjoyed. I can say that from the satisfied position of having finally seen off a stubborn omission in Stuc a Chroin. Whether my daughter will feel the same in years to come as she ticks off her own list of Munros and sees Ben Vorlich unvisited, remains to be seen.

And I’m sure we could see Stuc a Chroin as a smudge on the horizon from the top of the Scott Monument the next day.

The left-overs of a race or endurance event?

This, most likely: http://www.scottishhillracing.co.uk/RaceDetails.aspx?RaceID=RA-0033
A poor show for not clearing up after themselves, though.

It does surprise me that there is no path off Stuc a' Chroin back to the Glen Ample track: I would have thought this round is fairly popular, judging by the number of cars usually parked at the start!
An alternative to your route is to back-track to the Bealach Ghlas and descend from there, but it is quite steep and heathery.

I didn't follow the deer fence all the way around, before the point where the fence climbs higher, there is the remains of ruined gate in the fence beside a burn, I took this route through the trees to eventually reach the track in Glen Ample. http://www.gpsies.com/map.do;jsessionid=E6F256BE0BBF8C008957E947C7E7B473?fileId=ollxjqzuhovfowos.

... and those bottles of water are still on the top of Beinn each