The Tolmount - and then some

The Tolmount - and then some


I made a late start on this walk - later than I'd recommend for the distance - due to waiting to see what the conditions were like and spending much of the morning in Braemar. I wasn't due in Aberdeen until the evening and, from the map and description, expected to make good progress, so decided to aim for the Tolmount and Tom Buide, with the option of adding more hills on the return if things went well.

I'd altered my plans from camping the previous night to checking into a B&B in Braemar. That turned out to be the right decision, since I slept through the rain that would otherwise have kept me awake (and taken the shine off an early start). The skies were still grey in the morning, but the mountain forecast looked mildly optimistic. There was a high chance of a shower or two, but with the cloud base high enough for some clear hilltops.

I toyed with the idea of some outlying Cairngorm Corbetts, but Glen Callater seemed ideal. That offered a relatively-sheltered walk-in along Jock's Road, then "popping up" to include a couple of low Munros that ought to be beneath the cloud level. That ought to be more sheltered and less prone to cloud than Glas Maol, as well as avoiding the Cairnwell approach.

I had an early lunch, then parked up at Auchallater to set off shortly before 12:30. There's a parking charge (a couple of pounds) and information board, though I though it best not to delay any longer than I had! I passed some bundles of stakes and other evidence of work going on to set out on the track. This runs alongside the Callater Burn, providing easy walking and climbing gently up the glen. Hills rose to either side, becoming more impressive as I headed southwards. I passed several walkers in the first mile or so before the track crosses a substantial bridge. Another track leaves to the right, but I followed the main route south then southeast, eventually reaching several buildings at the foot of Loch Callater.

Another group were resting near there, so I paused for a chat and a bite. They were going to be heading back down the glen - as it turned out, I had the hills to myself for the rest of the afternoon. There were a few glimpses of blue sky through the clouds, but also enough grey to warn that showers were likely. I soon continued, following Jock's Road (a path) around the eastern shore rather than the track that crosses to the western side.

The ground was a little wet after the last night's rain, but not bad going at this stage. The path becomes faint at points and didn't seem so heavily-trodden as I'd expected. But it was straightforward to follow the Loch's northeastern side, aiming for the crags of Corrie Kander and Tolmount much further along the glen. Rougher slopes and crags on each side reminded me that there was a steeper stretch to come. The ground grows boggier and rougher as Loch Callater is left behind. Small burns flow down across what path there is and there were some muddy stretches, though nothing hungry enough to gulp down boots or walkers. I'd only had a few faint sprinkles, but that grew to a steady shower as the glen closed in and path grew steeper. I resorted to water-proofs, making the climb near Allt an Droighhnean slow going. I rejoined a clearer stretch of path higher up as the shower eased off, giving more views of the Tolmount. The Tolmount from Glen Callater

This is much more impressive from the head of Glen Callater than most other angles, looking quite formidable. The clouds parted, giving some scenic blue and brightening the open hill as I followed Jock's Road around a stretch of peat hags. The Tolmount was a mere half-mile away, but I opted to stay with the path for a few minutes more, visiting the top of Crow Craigies first. This proved a good viewpoint for the White Mounth hills as far as Lochnagar (which was cloud-free at that point, though soon hidden. I told myself that was better saved for another time and the conditions to appreciate it properly). That also confirmed my impression from maps, photos and reports, that there would be minimal ascent between those Munros - but, also, they would be better enjoyed and navigated in clear conditions. Mayar and Driesh also caught my attention, though there was only a tantalising glimpse of the top of Glen Doll. After the brief break for views, photos, a snack and water, I left the path and turned west for Tolmount. The walk in had taken 3 hours, so there should be enough time for at least the 2 Munros, maybe another hill or two along the return. There's a short boggy stretch in the gentle bealach, then a brief slightly stony climb, but minimal effort to the cairn of Tolmount and the walk's first Munro. Tom Buide and Glen Doll from the Tolmount

After another pause, I followed a more trodden path southwest from the top. I took a short-cut across the boggy dip before Tom Buide, rejoining a path to climb its gentle western side (not that it's a steep hill in any direction!) The clouds swept by, though the breeze was fresh rather than cold or blustery, offering bright patches further east. 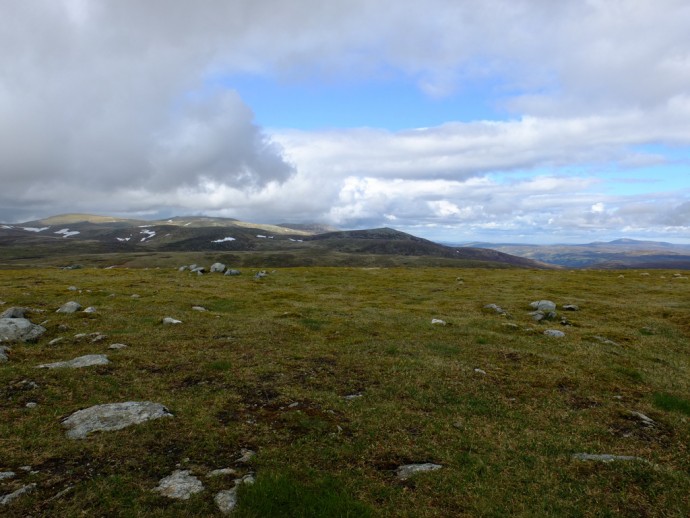 My route took the opposite direction, but there was time and I had the legs to take the high route back, starting out by aiming across Ca Whims towards Cairn of Claise. After crossing the slight rise of Ca Whims, I crossed a damper stretch (though without too much in the way of bogs and peat hags even after recent rain). A vehicle track winds its way up the east slope, though that's at a gentle angle so I cut across a couple of the zigs and zags. I left this track to turn right onto a rocky stretch, then followed a fence-line beneath a ceiling of low clouds. Some of the scattered rocks have been put to use to create not only cairns but a stone wall, which heads off towards Glas Maol. I opted not to follow it, having reached the 4.5 hour mark. The weather looked worse from the southwest, with greyer clouds and showers now evident, but it seemed a shame to miss out Carn an Tuirc when it was so close to the natural route north. In hindsight, I should perhaps have sought out the path again and followed that, but instead I cut across the (slightly boggy) slopes north then north-west. This felt like a longer descent, then climb up the rocky flank of Carn an Tuirc, than the map suggests. A shower arrived during my ascent, but I persevered and reached the higher western cairn to shelter for a couple of minutes until the weather eased. After my usual snack-break at the summit, I headed north - again, crossing some slightly rougher and rockier stretches than I might have met following the track further east. But the going was reasonable and the weather improving as I descended to a bealach before Carn Dubh. I made my own way around its heathery eastern side, trying to save the energy (and time) to squeeze in a final hill, though afternoon was turning into evening.

Moine Bhealaich Bhuide is, as the name suggests, a green and boggy expanse. I joined a vehicle track descending Carn Dubh, following that to a cross-roads then taking the northwestern turning. This climbs around a shoulder of Creag nan Gabhar, then fades into a path. A short peaty stretch led to a rocky ascent, though that wasn't troublesome even at this stage of the walk.

Now that the weather had settled, I was tempted to stay longer and take in the views, but time was drawing on. Lochnagar and the central Cairngorms were still cloud-topped, but Glas Maol and the Cairnwell group were clear and even caught some sun. I followed a path for most of my descent, heading north along the broad ridge across Sron nan Gabhar. This grows to a landrover track, turning right to descend into Glen Callater. I did opt to take a short cut for that stretch, making my way east down a heathery and rocky stretch rather than doubling back southwards, but soon picked up the main path alongside Callater Burn. That kept me company for the final mile, to find my car the last one in the carpark. 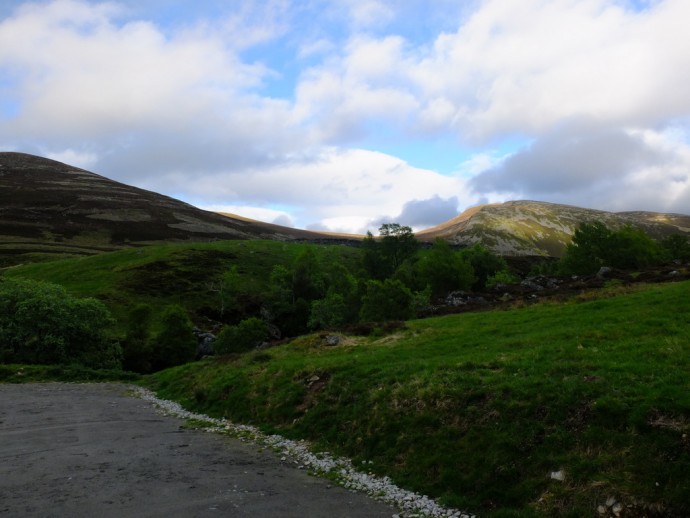 This route involves a lot of extra distance (even for just four Munros) compared to walking the group from the Ski Centre side, but I thoroughly recommend Glen Callater as a walk-in. I can't be as enthusiastic about the Glenshee direction, having taken that approach for the Cairnwell Three last year. This has left me with Glas Maol and Creag Leachach to visit, but I already have plans for these from Glen Isla, if ever I get round to it.

(Edited when I spotted that the date was a day out.)