Munros included on this walk: A' Mhaighdean, Ruadh Stac Mor


It was obvious that a timetable for climbing the Fisherfield Munros did not fit with B and B or hotel meal times, other than for a good hill runner. So it was a great piece of luck to find a self-catering apartment at Drumchork, near Aultbea on Loch Ewe, available at a reasonable price during the longest days of the year. After putting a question on WH about routes, all the replies I received encouraged me to tackle the two western Munros from Poolewe, and the three eastern ones another day, from Kinlochewe. So the morning after the longest distance I'd ever driven in a day, from Wakefield to Drumchork, I dragged myself out of bed, and realised the weather forecast was too good to miss the chance of walking the furthest I'd ever done in a day. By 6:45 am I set off walking, having parked in a layby next to the sea at Poolewe.


poolewewff.gpx Open full screen  NB: Walkhighlands is not responsible for the accuracy of gpx files in users posts

The views I'd heard about began to unfold as I walked along the north side of Loch Kernsary. 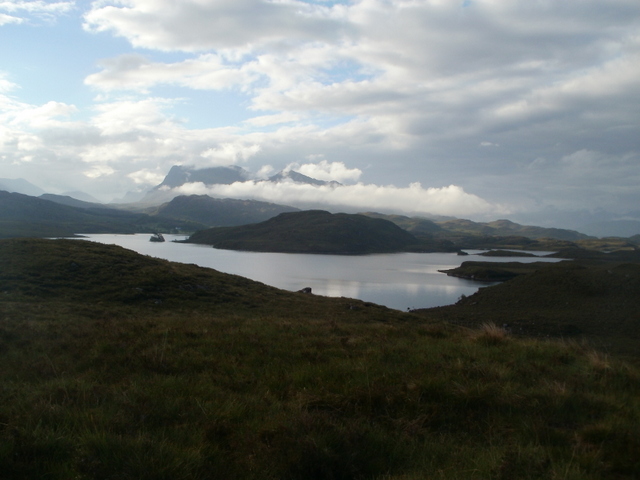 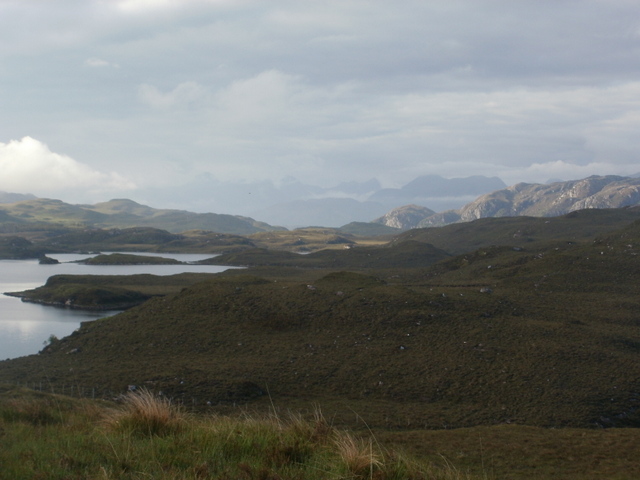 After the loch, I passed through Kernsary Forest, where I noticed two bikes had been left. The cyclists must have come via the longer route south of the loch; the path I'd taken would have been too rough. I emerged from the forest, and continued SE along the track. 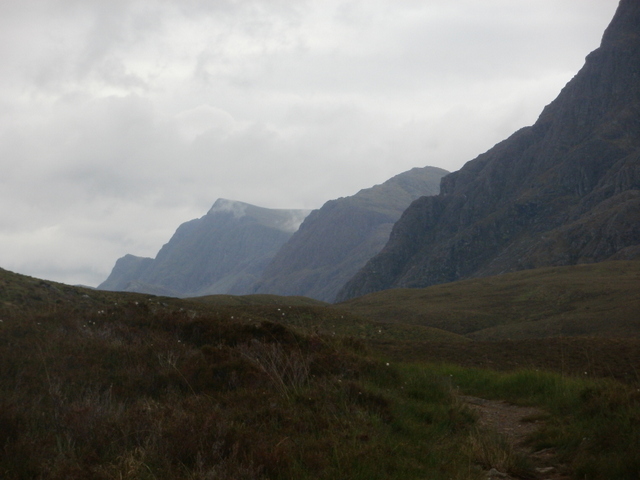 Despite the long distance, the gradients were easy, the path good to walk on, and the weather was fine, so this was a very enjoyable walk in, with superb scenery. At last I approached Fionn Loch. I could see the causeway with Dubh Loch beyond, and behind them was A' Mhaighdean, with a cap of cloud. 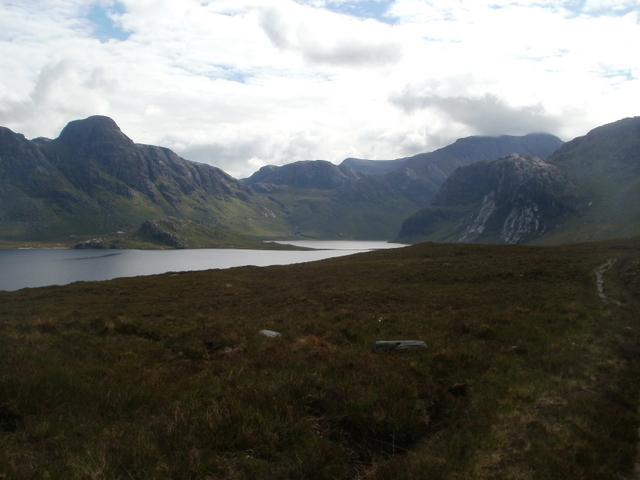 After crossing the lochs via the causeway, I passed by Carnmore. 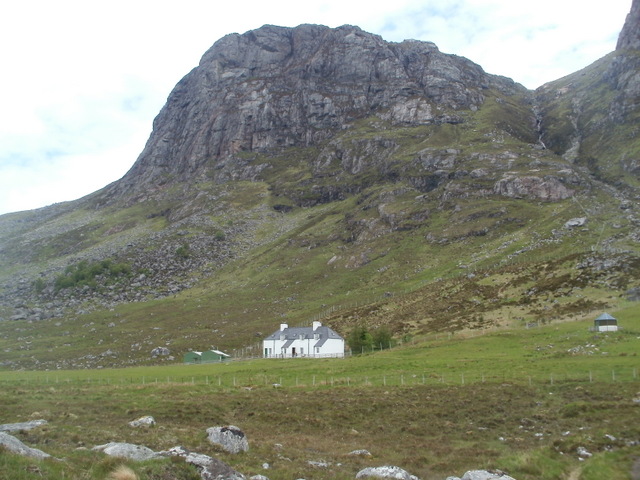 Looking across Dubh Loch, I saw that the maiden had shaken off her clouds. 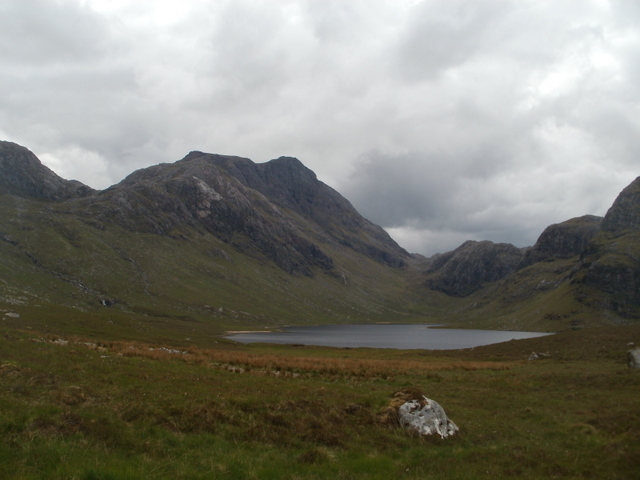 Soon the first real bit of ascent began. I had decided to make my move on A' Mhaighdean via the NW ridge. First I had to cross the Allt Bruthach an Easain. The burn ran in a deep ravine which barred a straight-line route to the ridge. I continued up the path and found a place to cross the burn at NG 9960 7680. Then I doubled back south, keeping below some crags, and reached the start of the ridge near Fuar Loch Beag. Ascending the ridge, there were some excellent views, including across the Fuar Lochs to An Teallach. 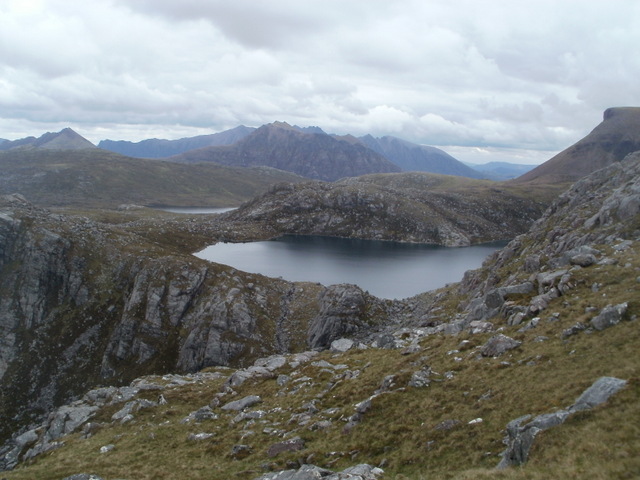 In time I moved towards the ridge's pinnacles. 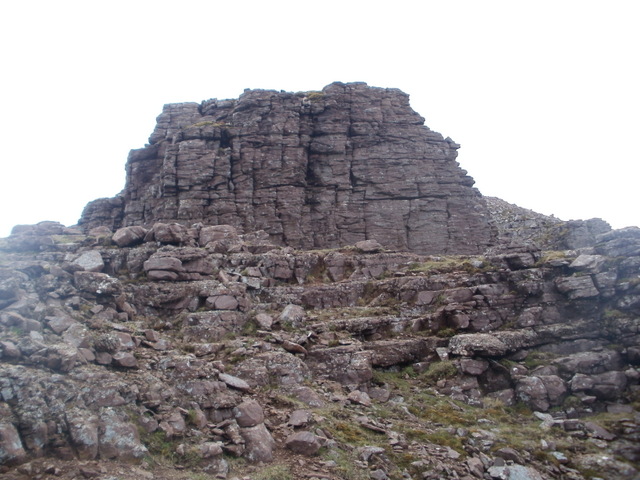 I'd read that all difficulties could be bypassed here. Maybe technical difficulties were avoidable, but there were one or two more brown trouser moments than on some graded scrambles I've done. This was probably because I came upon a couple of quite hairy situations I wasn't expecting. The gaps between the pinnacles are notches when viewed from the side, but when I arrived at the edge of one, it felt like coming to a great abyss with vertical walls that severed the ridge. However, there were great views down gulleys to either side, which made this route exhilarating. 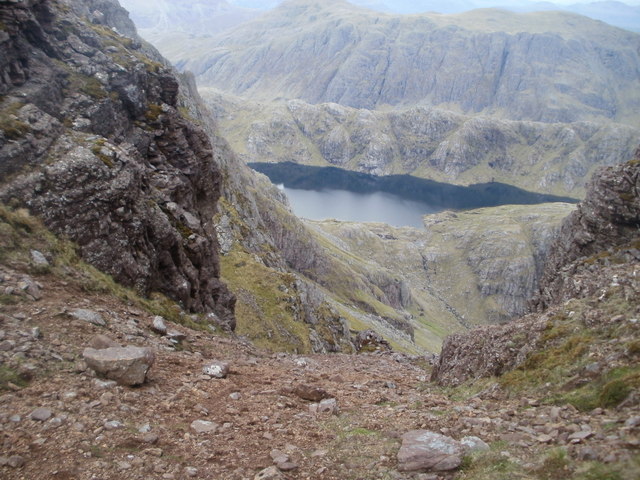 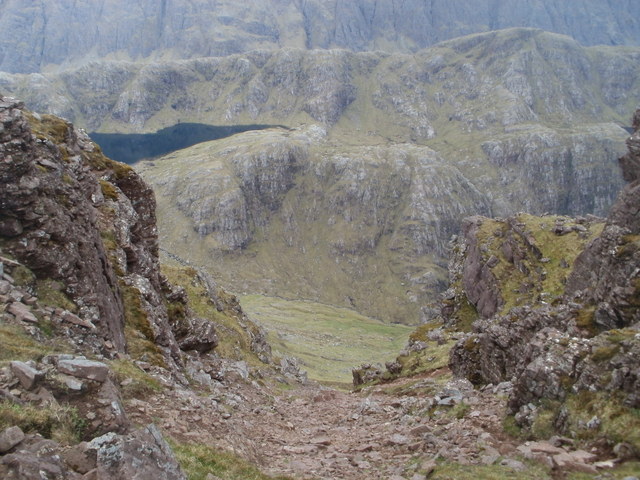 The first of the gaps I reached was crossed by a narrow but easy neck of grassy ground. I came to a second gap which looked completely impassable. Then, to the left, I noticed a path descending a steep gully. This also looked to be heading for a sheer drop, off the side of the ridge. But I had faith in the path and followed it down. Soon, as I had been hoping, it turned right, climbing up a little, non-difficult chimney, and led me through to easier ground along the ridge. The path moved over to the right hand side of the ridge, where it was eroded, traversing fairly steep ground, but not difficult. There was then a bit of a climb back up left on loose terrain, but again manageable. At last I came to the end of the ridge on easy ground, and I looked back at the pinnacles. 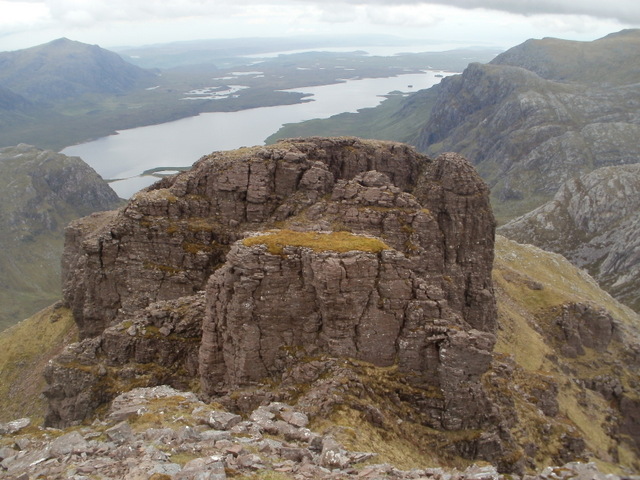 After passing over the 948 metre north top, I moved onto the summit of A' Mhaighdean. The weather had been kind, and I got that magnificent, hard-earned view. There is something quite magical about the panorama from this summit. Conditions were just right. There was good visibility, but a covering of high cloud stopped the sun form causing fatigue and dehydration. I could see the three eastern Fisherfield Munros: 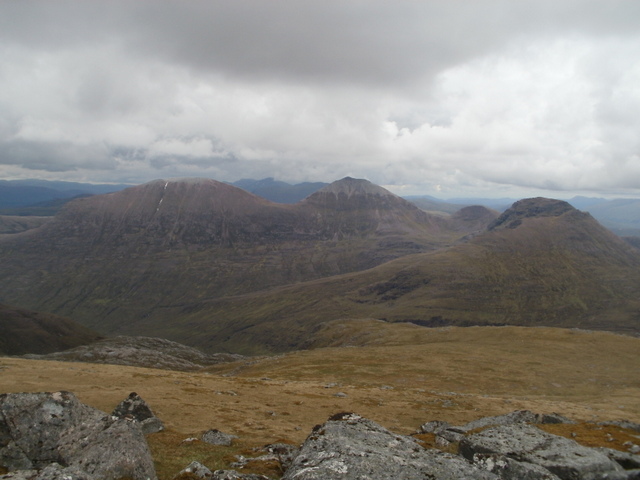 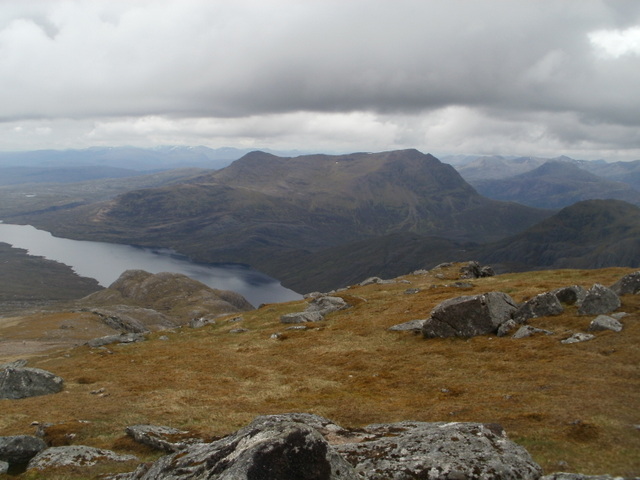 and a Torridon skyline: 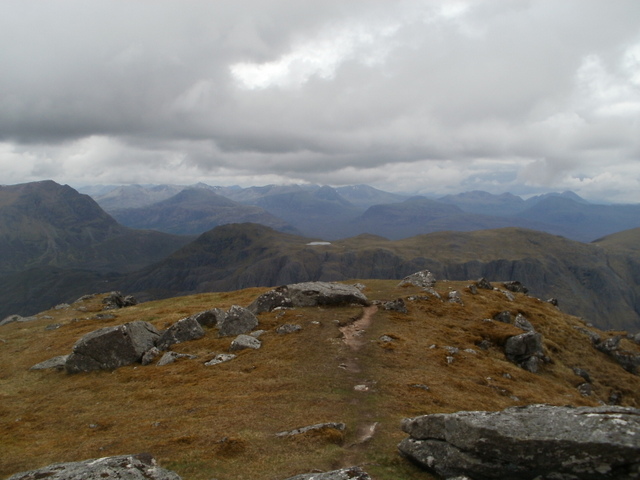 It was a great experience to be alone in this wilderness with such wonderful scenery. It would also have been nice to share it with some-one, and right on cue, another walker approached from the north. He was one of the two people who'd left their bikes in Kernsary Forest, and he'd climbed Ruadh Stac Mor first. His friend had come over the NW ridge to A' Mhaighdean as I had done, and would by this time be somewhere near the other Munro. The walker I met was Mike, originally from Norwich, but now living in Germany. He took his holidays in Scotland to climb the Munros; his conquest of these two gave him nineteen left to compleat. It also meant he could take my "I was on the most remote Munro of them all!" picture. 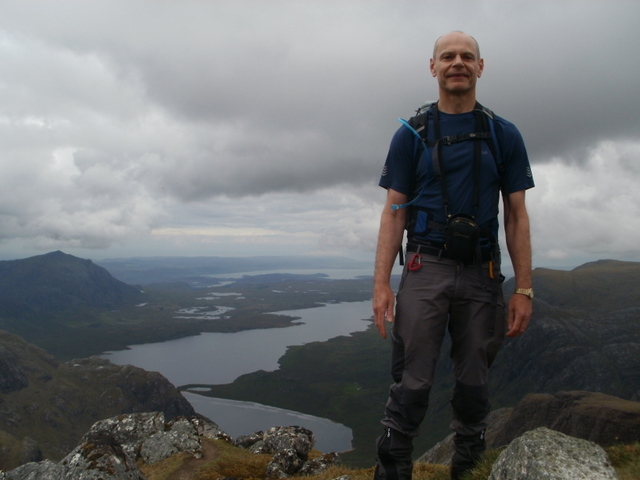 Next it was time to forge ahead to Ruadh Stac Mor. 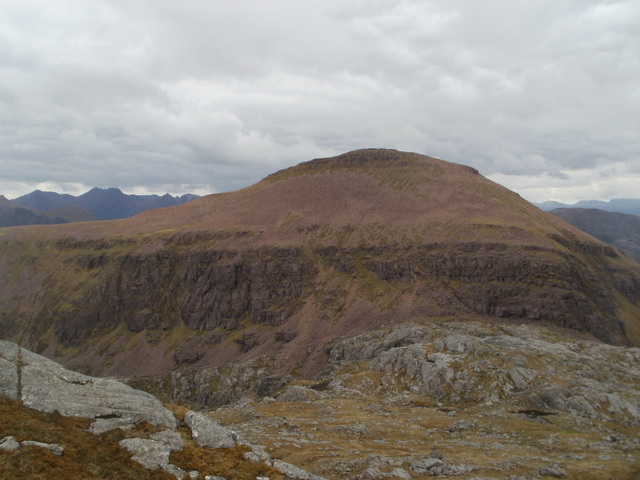 Mike also descended to the beallach, ready to make his return to his bike and Poolewe. We reached Poll Eadar dha Stac, where he sat down for a rest as I headed on up the Big Red Stack. 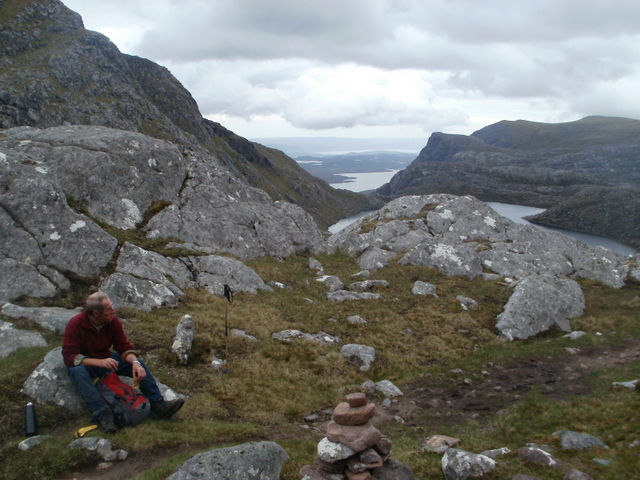 First there was a bit of mild scrambling up a rocky rake, then a climb over quite a tiring boulder field. Before too long I was on the second Munro of a very long day. This summit also has a superb view, especially of Beinn Dearg Bheag, Beinn Dearg Mor and An Teallach: 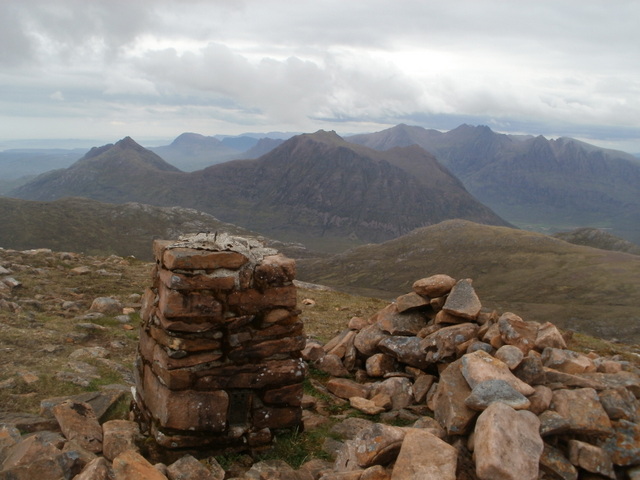 and of Fuar Loch Mor: 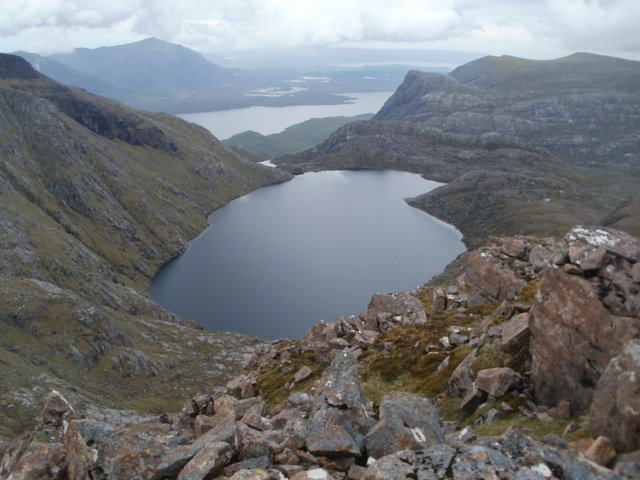 It would have been a great spot at which to linger, but on such a long route, it was soon time to climb back down again. At Poll Eadar dha Stac I turned right, and followed the path above Fuar Loch Mor. After a while, I crossed the Allt Bruthach an Easain. 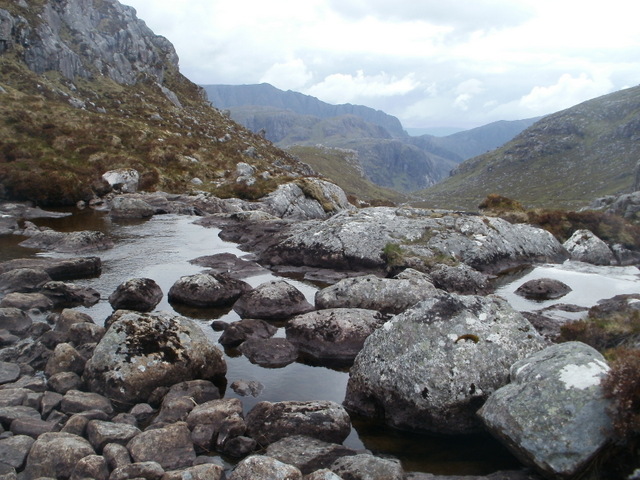 I reached the junction of paths and turned left and downhill, and came back to Dubh and Fionn Lochs. 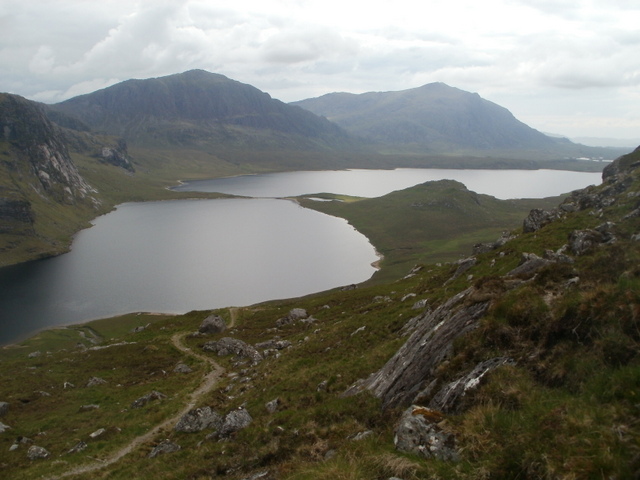 The thought of the long walk out was no worry with such beautiful scenery and ideal weather. In fact I was looking forward to it; all those great views again, but from the other direction. Eventually, Loch Kernsary and Loch Ewe appeared in the distance. 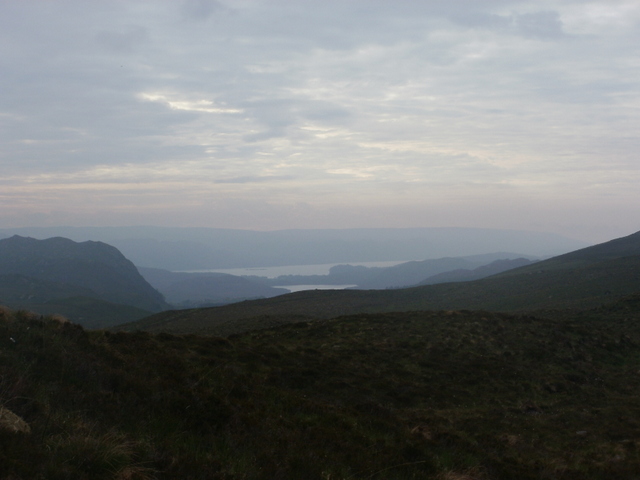 As I entered Kernsary Forest, it was time to apply the Smidge, after which I had no problems. I left the forest and walked alongside the Loch Kernsary. Looking across the loch, the clouds and June evening light were creating some very interesting effects on the distant mountains. 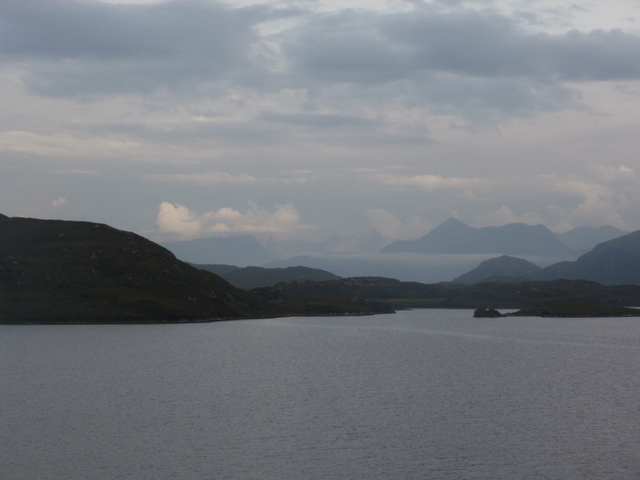 I reached the car in Poolewe at about 8:35 pm. One of the best days I've ever had in the mountains ended in style with a beautiful view over Aultbea and Loch Ewe, from the bedroom window of my apartment in Drumchork. 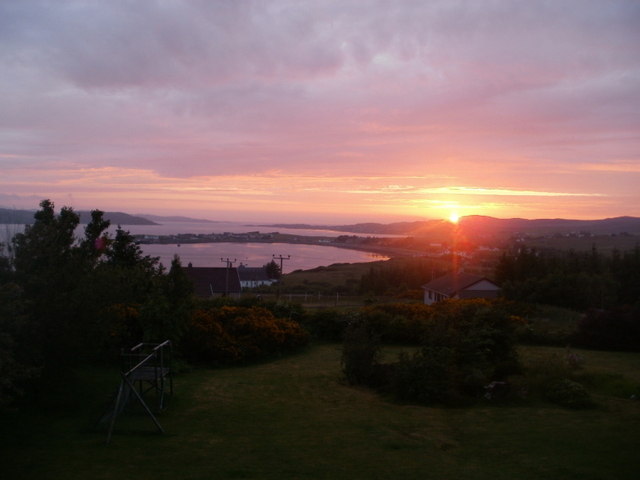 Enjoyed that ..and what a treat, the lovely sunset shot at the end

Looks a good day out Simon-b and the photographs proved it, well done

I imagine running into an apparent mauvais pas so far into the walk must've been a bit intense. Don't think I've actually read an account of its ascent before so very interesting, if not gripping, indeed!

After visiting this area for the first time this May, this is my new favourite part of the world, and now you've told me there are pinnacles I just have to go back

. Thanks for sharing the fun.

Enjoyed that very, very much. I have been savouring the prospect of a return to Poolewe for a holiday/long weekend basecamp and you have just accellerated that idea to the top again. I agree with you too about the split of visits to the area from the east, west and the north. Thank you and great pics too

. Very interesting for me as I have these two to do and was planning a similar approach.

I think I did the reverse of this route in 2001. The cloud suddenly cleared on A' Mhaigdhean and we could see for the first time that day. Magical! We spotted the pinnacles and decided to go down that way. I can't remember much about them now, but your photos show them to be pretty spectacular

Also, that spectacular walk-in is something you miss out on doing the Fisherfield 6 in one go. Nice one

They're certainly interesting when you encounter them, B&P.

Alice, of course it was one of those beautiful NW Scottish sunsets at the coast where the sun goes down sideways behind a headland, before a long gloaming. You don't see that on the Med or in the tropics!

Scooby, it was one of the very best days out.

ljt, it was a long way into a long walk to find an impasse. With care, a way forward was found without problems.

Bob, I'm not surprised it's your favourite part of the world. Thanks to that collision of continents long ago, we English are also lucky enough to able to get there in a day.

LS, I'd recommend this approach. With this, and the Kinlochewe route to the other 3 Munros, you miss the river crossings and the bog.

Malky, I suppose it's a good thing that A' Mhaighdean is so remote. That means many people will save it for a weather window, increasing the chance of seeing that wonderful view.