Don't fall flat on your Fannich!

Don't fall flat on your Fannich!


After a long day in the Western Fisherfields on Sunday 16 June, I had a steady four days climbing the Munros around Loch Fannich, using the regular WH routes.

The Fisherfield walk had left me with a slight calf strain, so I had a rest on the Monday morning. After a few stretching excercises, I felt ready for an afternoon walk, so I drove from my holiday apartment by Loch Ewe to Achnasheen. The walk up by the Allt Achadh na Sine was pleasant enough, in fine weather. Then followed the grass slopes over Creagan na Laogh. Things became more interesting on arrival at the edge of the corrie, which led to Fionn Bheinn's summit. 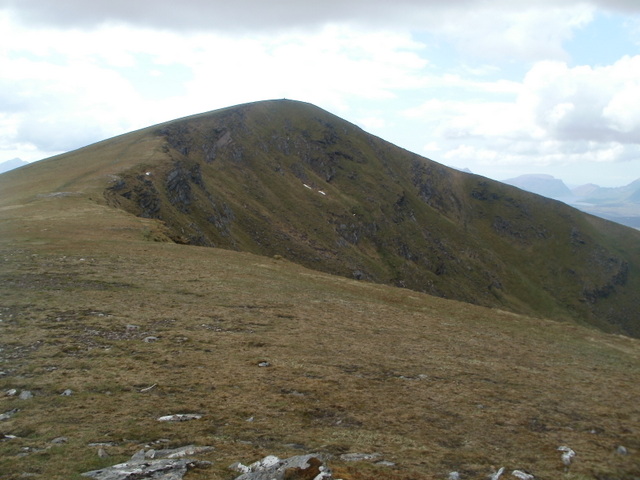 On top of the mountain, there were nice views of Loch Fannich: and the Coulin Forest and Torridon mountains: Next followed an easy descent, back by the way I'd come up, then the drive back to Loch Ewe via Loch Maree and Gairloch.

After parking a few km from Braemore Junction on the A832, I set off towards some cloud covered Fannichs. It was a grey day, but not wet, and the climb up Druim Reidh was an enjoyable one. I moved towards Toman Choinnich. Down on the right was Loch Toll an Lochan and above it, A' Chailleach with its head in the clouds. To the left, Sgurr Breac looked as if the mist might lift from it. I reached the top of Toman Choinnich, with a hazy view down to Loch Fannich When I got to the bealach en route to Sgurr Breac, the wind was really blowing. Mobility was quite hard on the ridge up to the summit, and I was now in the cloud. Sgurr Breac was visited with not a lot to see, so I made my way back to Toman Coinnich, which was now also in the mist. The next stage, to A' Chailleach, required careful navigation through the clag. As I reached the summit, the clouds promised to thin out, but didn't allow much of a view.

I began the descent along Sron na Goibhre, then dropped out of the clouds. A turn down east was made to cross the Allt na Goibhre, and then I headed towards Loch a' Bhraoin. There was a good view over to An Teallach along the way. Soon I was by the loch, looking over to the old boat house. Then it was back to the car, and the journey through Dundonnell to Loch Ewe.

Back at the same parking spot as on the previous day, I again headed towards some misty Fannichs. After the slog up Meall a' Chrasgaidh, its summit was clear, with a view back to the Beinn Dearg group. Next it was on towards a cloudy Sgurr nan Clach Geala. During the climb, there were peeps through the mist of features along the rocky ridge. I reached the summit of Sgurr nan Clach Geala, which was in and out of the clouds. This created an atmospheric situation on this impressive mountain, with views coming and going. 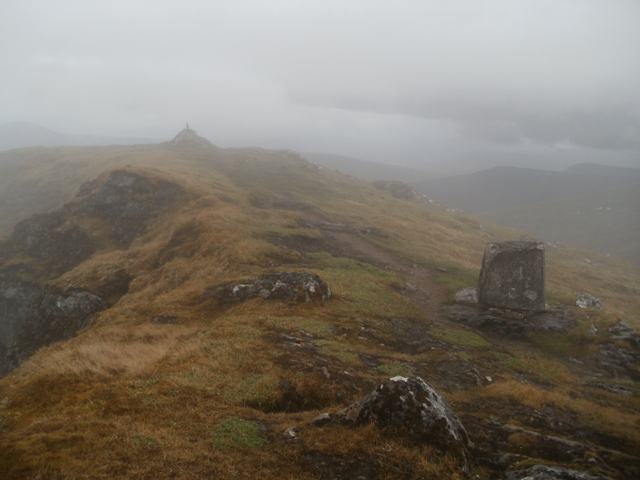 Then I moved on towards Sgurr nan Each, which was clear of mist, via Cadha na Guite. 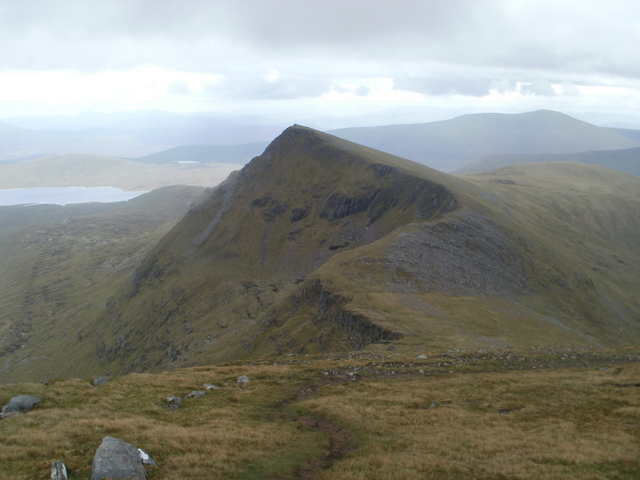 On reaching the day's third Munro, there was a view down to Loch Fannich. I retraced my steps to Cadha na Guite, and then the cloud lowered. There was poor visibility as I made my way down to find the track by the Allt Breabaig. Care was required to avoid gravitating into Fliuch Choire by mistake. The track was found OK, and I made my way back to the car.

On the Thursday, I was driving through Dundonnell again, this time past Braemore Junction and Loch Droma, to arrive at the car park that brings, for some of us, fond memories of the Am Faochagach river crossing

. It was already early afternoon, and the latest start I've made for a walk of this length. It's a good job it was almost the summer solstice. The sky was overcast, but this time the Fannichs were cloud free as I walked towards them. During the fairly long walk in, drizzle started. In time I was passing over Creag Dhubh Fannaich. There were scatterings of small, colourful flowers on the ridge, heading towards Beinn Liath Mhor Fannaich. Soon I entered a boulder field, and also entered the clag, which had lowered. When I reached the summit of the Big Grey Hill of Fannich, the clouds had lifted again, but the drizzle was still there, so the view towards Loch Broom was somewhat hazy. As I set off towards Sgurr Mor, it had its head in the cloud. Loch a' Mhadaidh could be seen, down on the right. On my approach, the Big Peak revealed itself. 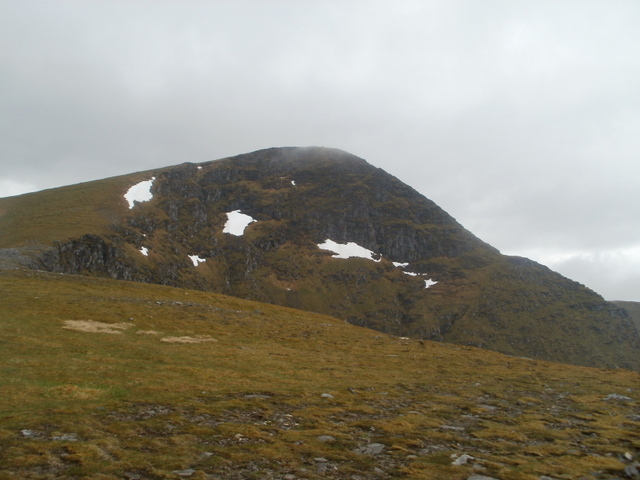 I made my way up the zigzags, which had a good airy situation at the edge of the corrie, onto the summit of Sgurr Mor. It was raining, but I had a view, over to Sgurr nan Clach Geala: and back to Beinn Liath Mhor Fannaich: By the time I made my way down from Sgurr Mor and was heading SE along the grassy ridge towards the final two Munros, the camera lens had got wet, so there were no decent photos from Meall Gorm or An Coileachan. I met two walkers on An Coileachan. They were doing the same round of four but going clockwise. They'd made a very late start, and this was their first summit of the day at about 5 pm; It's definitely a good job it was almost the summer solstice!

My descent from An Coileachan was rather rough. I reached a steep pitch where I didn't think it was necessary to turn and face the slope. My right heel was on a good rocky hold, but it was a bit of a stretch to make the next move to easier ground with my left foot. I went for it, but my left foot slipped on the wet surface

. This was the point at which the author fell flat on the mountain! After an uncontrolled slide on my backside along a slimy rock, I came to rest, thankfully unharmed. I'd made a bit of ground downhill very quickly, but it wasn't a move I'd recommend! Back on my feet, I carried on towards Loch Gorm, looking through the raindrops. Past the loch, I made the long walk out back to the car park. At the car, I had a look at my waterproof trousers, to check if a couple of recently applied repair patches on the seat had survived that slide. They had, but there was a new tear in the trousers

. Two days later I was in Inverness, so a visit to Tiso was in order to buy a new repair kit.

There may have been fun and games along the way, but all the Munros around Loch Fannich had been conquered