It was the second week of my fortnight's stay by Loch Ewe, and after three days of British 'staycation' things, like walking on beautiful but wet and windy beaches, the forecast had improved again, and it was time to get back to the hills. I left Drumchork near Aultbea early and drove to Kinlochewe, parking at Incheril. At 7 am I was walking towards the Heights of Kinlochewe.


klocheweff.gpx Open full screen  NB: Walkhighlands is not responsible for the accuracy of gpx files in users posts

I was expecting a long, hard, day. Reading up about this route had suggested there would be about 2400 metres of ascent; more about that later. After the Heights of Kinlochewe, I crossed the Abhainn Gleann na Muice. This was the southern burn with that name of course; another burn flowing north from the same mountains towards Loch na Sealga has the same name. The previous week, being alone in the Great Wilderness in fine weather and climbing the two western Munros had been an awesome experience. But as I approached the eastern Fisherfields, they were in mist and it was raining. Heading for such remote mountains solo can be a little intimidating in these conditions. I stopped to get something out of my rucksack, when two other walkers caught me up. They were brothers, Chris, now living in Bradford, and Andy, now living in Chester. They'd been hoping to do the Fisherfield six from Shenavall, but high river levels had forced a change of plan. They were now after the same three Munros as I was, so we agreed to walk together. There was a long day ahead, but plenty of daylight hours, so we agreed to go at a steady pace. In time we reached Lochan Fada, where we left the main track and turned north. We climbed on up to Creag Ghlas Mhor, with the weather looking as if it might improve. I'm not sure if it's Chris and Andy who were leaning, or the 'photographer' We approached the summit of Beinn Tarsuinn, now in the mist. At the summit cairn, there was no distant panorama, but there was an atmospheric close up view down the north face. Next, we headed towards Bealach Odhar, which was ESE of us. In the cloud, careful navigation was required to avoid gravitating into the northern corrie. We dropped out of the cloud as we reached the bealach, looking left down towards (the northern) Gleann na Muice. The clear view also allowed us to see the bypass path along the NW flank of Meall Garbh, heading for the next bealach on the route. We had a lunch stop at Bealach Odhar, then headed along the bypass.

On reaching the next bealach, we began the assault on Mullach Coire Mhic Fhearchair. Back in the cloud, we reached the boulder field on the route to the summit. the rain had eased off, and the boulders weren't too slippery. Onwards and upwards we went, to the highest of the Fisherfield Munros. The misty Mullach bagged, we made the descent north. The route down the steep ridge was made easier by a zigzagging path. Another cloud-free bealach passed, we started climbing Sgurr Ban. By the time we were on top of the White Peak, we were back in white mist. Tiny glimpses of views came and went, as we had another break for something to eat. Next we retraced our steps south. I looked on the bright side about having to climb over Mullach Coire Mhic Fhearchair again; perhaps we'd get summit a view this time. My companions didn't hold out much hope. So we zigzagged back up the Mullach. The climb wasn't effortless, but wasn't as gruelling as I thought it would be at this stage of the route, if there really was around 2400 metres of ascent involved. Back at the highest summit of the day, I waited a little while for the cloud to clear completely, but in vain. We set off downhill and south, and back out of the mist. Now we could see Bein Tarsuinn. To the left was a view of the the Mullach's E/SE ridge. Chris and Andy decided to use the bypass path to Bealach Odhar again, en route to Lochan Fada, ready for the walk out. I fancied going over Meall Garbh, so we chose to meet each other on the far side. The climb up Meall Garbh was fairly short, but steep. I still had more energy left than I thought I would. On top of the Meall, I finally had that classic view of the magnificent Corbett, Beinn Dearg Mor, that I'd wanted from this angle, with its neighbour, Beinn Dearg Bheag, to the left. I descended the other side of Meall Garbh, and saw Chris and Andy walking some distance below. They were resting on a rock as I caught them up. We headed down towards Lochan Fada, with a superb view of Beinn Eighe in the background. 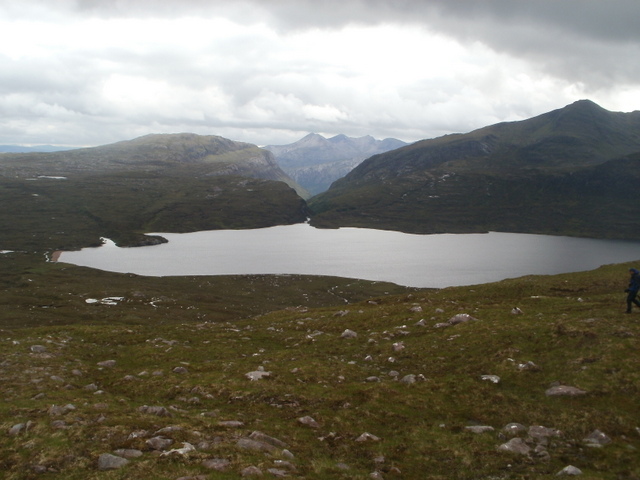 As we passed by the lochan, the weather was much clearer than it had been here in the morning. We got going with the walk out, and looked back at the now clear mountains we'd climbed. Finally approaching Incheril, there was a great view in front of Beinn Eighe. Back at the car park, it had taken us 13 hours, but we'd taken it steadily and had a few stops. Still, I hadn't found the day as hard as I thought I would. Later, when drawing the route map for this report, the WH GPS planner estimated the total ascent as 2077 metres, and Memory Map gave a figure of 1927 metres. So this probably wasn't the greatest amount of ascent I'd done in a day, when previously I'd thought it would be. Anyway, the Fisherfield Munros are superb mountains, and it's satisfying to have climbed them all.

..shame you didnt get clear tops ..can't have it all ey?! ..bet the company was nice in those conditions

..shame you didnt get clear tops ..can't have it all ey?! ..bet the company was nice in those conditions

Thanks, Alice. No, you can't have it all, and yes, the company was very welcome. I've no complaints about the views, we did get some good ones in places, and I had plenty of great views over the two weeks.

somewhat iffy weather but a great location simon - you're making me jealous - did you visit the wee distillery at Drumchork ? (still have a bottle of the spirit at home unopened

rockhopper wrote:somewhat iffy weather but a great location simon - you're making me jealous - did you visit the wee distillery at Drumchork ? (still have a bottle of the spirit at home unopened

Having good weather for the western Fisherfields was good enough for me, RH, I was happy to have it that way round. My apartment was very near the distillery, but I'm afraid I had an alcohol-free two weeks (even bigger

That ridge would have made a good route on or off the main ridge. There is some easy but fun scrambling over the pinnacles on Sgurr Dubh.

malky_c wrote:A bit murky looking but at least you got to see some scenery in there

That ridge would have made a good route on or off the main ridge. There is some easy but fun scrambling over the pinnacles on Sgurr Dubh.

We did meet someone wild camping by Lochan Fada, who'd ascended via that ridge on a previous visit.